Sonas, a Gaelic form of happiness


In 1992 I had built several small boats, mainly American designs picked from the "how to" books written by the late John Gardner of Mystic Seaport and for my next project I had decided to build Joel White's Haven class. An American friend living in Scotland persuaded me to look closer to home and told me about David Ryder-Turner, whom I had never met. He suggested that I look at D R-T's design number 41, which he had admired.

A few weeks later D R-T clumped up the drive at Kilmelford very early one Saturday morning. He must have left the Clyde before dawn. He had under his arm a loaf of bread which he had baked, a bottle of wine and a set of drawings. Number 41 was a little centreboard canoe yawl, very long and slender. The lines and sail plan were pinned on the sitting room wall and studied in great detail over the next few weeks. After the visit we kept in touch by phone. The design became number 42.

Design number 42 was basically Sonas. D R-T put a lot of pressure on me to go ahead, offering to supply drawings and help if I would build two boats, one for each of us. It was drawn in three sizes and the largest was selected. This meant the boat would not fit in my workshop. A redundant industrial unit was found, which I could rent for one year before the owners needed it. This meant that many parts would need to be prefabricated. By October 1992 I was persuaded to make a start.

Over the winter moulds were made, the stems laminated and D R-T got on with the drawings. I started working out the building schedule and wondered how to build a boat while keeping on top of a demanding day job. Eventually this led to shifts of 8.00am to 4.00pm in the office followed by 5.00pm to 11.30pm in the shop a couple of days per week and two full shifts at weekends. D R-T was to visit, do some work and supervise. Early on he decided against having a boat of his own. This meant that the overhead got a bit heavy for one boat, moulds etc were only used once, but saved on the amount of work involved.

Sonas was to consume about two thousand hours of work, from me mainly but also D R-T himself and the late Duncan McKay, who scheduled his work as a taxi driver to allow him to attend eventually almost daily. Boats have that effect on people. With the experience I now have I could build the hull very quickly, but finishing would always take a lot of time. As the man said, building a boat is ninety percent sandpapering.

The bow and stern stems were laminated Douglas Fir, an excellent wood used for the keelson, beam shelves, deck beams and much else besides. The stems were set up on a ladder, which supported the blockboard moulds. The beam shelves were temporarily slotted into the moulds and protected by plastic to stop them becoming glued in. The moulds were taped up for the same reason.

Originally the hull was to be covered with mahogany veneer and I bought enough for two hulls from McGruers boatyard. I should have realised they were only selling it because they had machined it too thinly and it was useless. I was left with enough wood to make model boats for about two centuries. However experience is a valuable commodity. The hull was eventually planked with red cedar from Joe Thompsons of Sunderland. This was machined 18mm thick with a concave/convex profile, a product now largely replaced by Speedstrip. The strips were glued with Balcotan, as the prospect of mixing epoxy hundreds of times was daunting.

Western Red Cedar has the advantage of being rot-resistant, very light, long-grained and strong. It glues beautifully with Balcotan or epoxy. Thompsons' product was very mixed in quality. A lot had been machined with no regard for the grain and was discarded. It is poisonous and if you get a little skelf you really feel it a few days later. It would make good arrow heads. Thompsons' strips had a lot of splinters. Doing the job again I would use Douglas Fir or Honduras cedar and get it specially milled with straight edges. These could easily be planed, or epoxy squeezed into the spaces. Of course this would also be heavier, but you could reduce the dimensions to compensate.

D R-T insisted that the individual strips be scarf-jointed to get the complete lengths, most needing to be about 27 feet. To do so I built a scarfing box through which I could run a portable circular saw. I also made a jig in which I could glue up five at once. D R-T called sometimes and condemned a joint here or there. About 150 joints passed his test and were used. This work was quite unnecessary. Butt joints would have been quite adequate. Planking up should have taken about 100 hours and took about 300 because of this.

At the end of 1992 the hull was complete, epoxied, glassed and faired while upside down, then left to cure over the Christmas break. In January 1993 I held a turning over party to get the man and woman power to lift Sonas safely. She was so light she nearly flew up to the roof.

I had glued MDF boards to the outside of the hull, octagonal in shape, to facilitate turning over. I found that I could roll the hull over unaided, which meant that later I could do all sorts of jobs single-handed. For example, drilling for keel bolts was done with the boat on her side, checking the drill bit with a spirit level.

I decided to build the floors from scrap Bruynzeel ply stacked to form blocks, which were spiled and fitted. Had they been shaped when the moulds were set up a lot of time would have been saved. The inside of the hull was cleaned off (horrid work) epoxied and the bilges glassed. D R-T instructed that the glass should be fitted between the floors. Doing it again I would glass throughout, then fit them. This would be easier and I think stronger. What was done has proved very strong however.

The beam shelves, which had been only loose-fitted originally, were now freed from the building moulds, finished and glued into the hull. They are massively built and much over strength. The boat was set up dead true to her waterline and the sheerline faired down, a process which took lots of time and was enormously satisfying.

The ring frames were cut from 25 mm Bruynzeel ply, spiled and fitted. Again they should have been fitted and shaped earlier. Spiling added about 50 hours.

I found a single log of ancient yellow pine lying at the back of a sawmiller's yard, that had been there so long it wasn't on his inventory, which I bought and got machined for deck-planking. It was epoxied in strips on top of 7mm plywood giving a finished deck thickness of about 16mm.

Covering-boards and kingplanks were made from mahogany, as were seats and other internal furniture. After some experiments with machines these were hand-sanded.


The keel was cast in Cornwall by Henry Irons from a piece of lead cut from Kentra's old one. William Fife's wonderful creation of 1923 was losing a little weight to balance the installation of modern equipment. Thus Sonas has a physical connection with her inspiration. The new keel was delivered to Scotland on the back of a Cornish cream lorry.

The bronzework came from a variety of sources and some was quite indifferent. I would never again buy bronze fittings without inspecting a sample. I suspect there are gentlemen out there who think that if you can cast bronze at all you are a craftsman. The best stuff came from Moray MacPhail at Classic Marine, who really knows his stuff.
The blocks came from Harry Spencer and were a delight. They looked too pretty to use, the smaller ones equipped with farthings, the larger with halfpennies.

The spars came from Collars and were beautiful. D R-T had supplied a spar drawing in great detail and this was complied with. The mast was to break the first time it experienced a real breeze and I had to order a stronger one. The lesson in this is not to tell the expert how to do his job. Had I asked Mr Collar for a mast to do the job and left the dimensions to him there would have been no problem.

Gayle Heard made the sails. They are pretty good.


The name Sonas is Gaelic for a type of happy experience and was the name of one or two famous boats in the past.

The boat proved very strong and virtually maintenance-free. She is extremely fast and must be reefed in strong winds. This was a deliberate part of the design as I did not want to bother with a spinnaker and our winds are usually light. She will scare the unwary and should be treated as a fine piece of sports equipment rather than a serious yacht. Her looks are quite outstanding and when you are on the water you had better be ready to have your picture taken.

With the experience gained in sailing Sonas I suggested to D R-T that he should draw out the design to twentyeight feet, widen the hull by nine inches and include a centreboard. This would have increased the displacement and made her more sea-worthy, as well as increasing the cockpit space. The centreboard, which I had discarded because we have plenty of deep water, would have made her easier to handle out of the water and enable easier transportation to sailing events. You could also explore shallow coves and picnic places more easily.

D R-T had originally suggested the yawl rig and I had rejected it, because I considered it fussy in such a small boat. I am now convinced that it could be very useful, as it would enable you to sail home comfortably under foresail and mizzen when the wind got up.

The UK yachting press showed almost no interest in Sonas, probably because there would have been nothing in it for the commercial interests that dominate our publications. D R-T wrote her up for Classic Boat in June 1993 before she was built. When she was finished I sent them some photographs and a short piece, but didn't receive an acknowledgement. Wooden Boat later ran an article on the modified design.

Theo Rye tells me that he is now working on a project that may result in one of the larger versions being built. It will be interesting to see what happens.
Here is a photo taken by D R-T at the launching. The late Duncan McKay, who gave hundreds of hours to the project, is on the extreme left. He was a wonderful person and it was very sad that he didn't live long enough to go sailing on Sonas more than a couple of times. 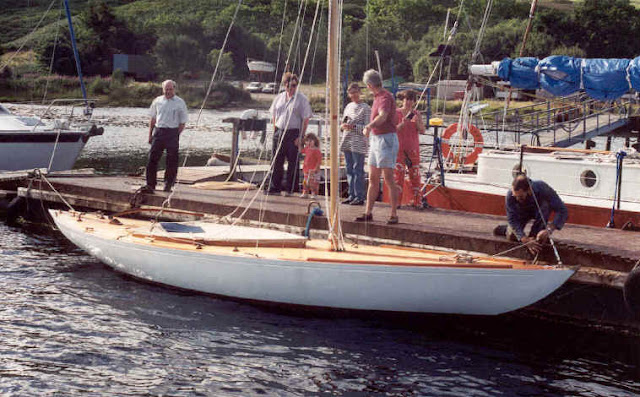