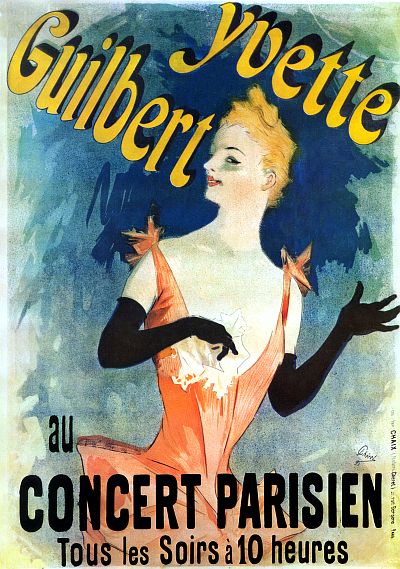 In 1890 Yvette Guilbert appeared for the first time on the stage at the Moulin Rouge to instant fame and was to remain an international megastar for many years. I'm not sure if she found time to go sailing and suspect that she wouldn't have been particularly attracted to conditions in the Firth of Clyde, but she seems to have lent her name to at least two little yachts that did sail there.
I discovered these Yvettes while searching fruitlessly for details of a yacht pictured in Kathy Mansfield's September 1996 article in Woodenboat magazine, where she is named Wyvette. The article describes her as designed by Alfred Mylne in 1897 as a 17/19 footer. This is odd because, as seen on a previous post, this class was rendered obsolete in 1896 with the arrival of the 19/24s on the scene. 1896 was also Alfred Mylne's first year in business and he was immediately involved in designing for the new class. He was meticulous from the beginning and his records do not show this yacht. Further, any yacht racing on the Clyde in 1897 would have featured in the Glasgow Herald's yachting notes, but nothing appears. Kathy's article, which has a photograph of the putative Wyvette, can be read here
Searching the yachting notes turned up the two Yvettes.
First is a half-rater lugger Yvette racing on the Clyde that first appears about August 1895. The last reference to her is in a race in August 1898. She doesn't feature in the Fife yard list, nor in the G L Watson database, so I have no further details.
The second Yvette is W Fife III's design no 449, built in 1898 for Peter Donaldson and his sister. Fife's yard list describes her as "lug l.r 21 4 tons, lwl 16.54 feet" l.r is presumable linear rating. In 1899 Fife designed Pierette for Peter Donaldson as a sister ship in which to race against his sister. The Donaldson family were great customers of the Fife yard and these were the smallest boats he designed for them.
The second Yvette is listed in the British Classic Yacht Club, but with no details. Classic Yacht info gives the following:-

For many years this yacht was kept at the Clyde Canoe Club, later to become Loch Lomond Sailing Club. She was owned by a Doctor, Donald Atherton, who raced her regularly at the club. The only other comparable yacht in the club was an old yacht named 'Mina'(or 'Minna'). She was owned by "Baldy" Bates, and crewed by his lifelong sidekick, Eddie Paterson. In the sailing club, there still hangs a rather nice painting of both yachts moored off Inch Moan.

She's described as 1899, W Fife III, 8.25m loa, 5.7m lwl, 2.02 beam, 1.35 draft, 3 tons, sail area 48.30sqm.
From the various descriptions I think it's unlikely that the boat Kathy saw in 1996 is either of the Yvettes, so her identity may remain a mystery. I've put out some feelers to see what further information about any of these boats comes to light and will post any information that results. If you know anything about them please leave a comment.
Posted by Ewan at 02:40