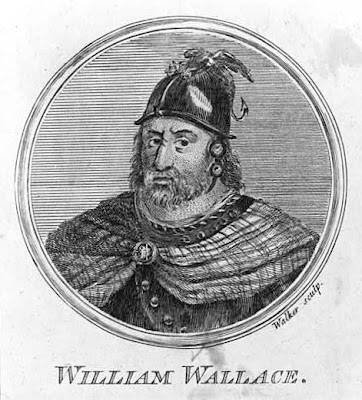 If he had stuck to tennis at least he wouldn't have lost his head. William Wallace, even without the Braveheart hype, has all the endearing features of the Scottish hero, the brutal underlying savagery being totally submerged in the unjustness of his end. It would be nice to think that the image above, albeit done a few hundred years after his death, was reasonably accurate. He certainly looks like the sort of fellow you can expect to meet today in places like the Lismore Bar, but I wouldn't recommend commenting on his choice of hat.
Very little authentic material about Wallace survives and one of the few documents is the famous letter of 11 October 1297, a month after the defeat of the English army at the battle of Stirling. It was sent to Luebeck and Hamburg and the former survives. Here is an image:- 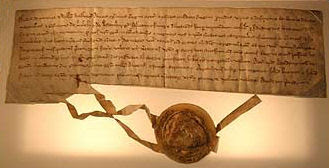 And here is a transcription of the original text:- 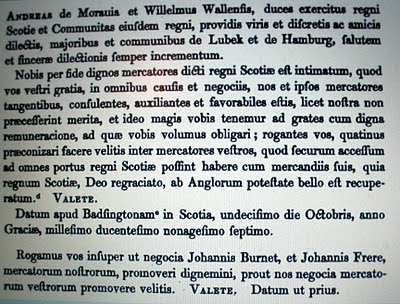 In looking for the text online, as my Latin is rusty, I was interested to discover that the letter is now being promoted as a teaching aid in Scottish schools. National Archives of Scotland helpfully provide teachers with a translation, as follows:-

"Andrew Moray and William Wallace, leaders of the army of the Kingdom of Scotland and the Community, to their worthy and beloved friends, the Mayors and citizens of Lübeck and Hamburg, greeting. We have been told by trustworthy merchants of the Kingdom of Scotland that you are giving help and favour in all business concerning us and our merchants for which we thank you. We ask that it be made known among your merchants that they will now have safe access to all ports in the Kingdom of Scotland, since Scotland, blessed be God, has been rescued from the power of the English by force of arms. Given at Haddington in Scotland, on the 11th day of October in the year of grace one thousand two hundred and ninety seven."

But hang on a minute, isn't there a bit missing? The whole thing actually translates as:-

"Andrew of Moray and William Wallace, leaders of the Scottish army, and the community of the same kingdom send to the prudent and discreet men, our good friends, the nobles and the commoners of Luebeck and of Hamburg greetings and a continuous increase of sincere affection. We have been informed by trustworthy merchants of the said kingdom of Scotland, that you on your own part have been friendly and helpful in counsel and deed in all things and enterprises concerning us and our merchants, even though we did not merit this. We are therefore the more beholden to you, and wishing to prove our gratitude in a worthy manner we ask you to make it known among your merchants that they can now have a safe access with their merchandise to all harbours of the Kingdom of Scotland, because the Kingdom of Scotland has, by the grace of God, been by war recovered from the power of the English. Farewell. Given at Haddington in Scotland on the eleventh day of October in the Year of Grace one thousand two hundred and ninety seven.

I'm sorry to be an old cynic, but to me it looks as if the postscript is quite important and the  copy letter a much better teaching aid with it. It would be fascinating to know if letters like these were in fact issued in numbers to better the chances of merchants like Burnet and Frere. Perhaps  more letters will come to light in the archives of the other old Hanseatic ports.

P.S. For anyone confused by the first sentence of this post, it was first published just after the start of Andy Murray's recent spell of bad luck!

P.P.S. The above postscript was added before his Gold!
Posted by Ewan at 04:19 No comments: Links to this post

Pictures from the archives 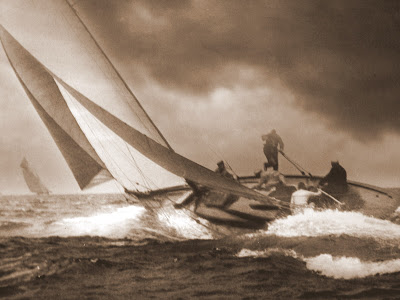 Above is an image of the 1921 Fife gaff cutter Clio with William Fife III at the helm. When I scanned it from the Thom archive I thought I had found a rare treat, but in fact the picture had a fairly wide distribution. At present I don't know the identity of the photographer. I'm not at all sure why no less than three of the crew have left the safety of the cockpit in what looks like a nasty squall.

The so-called Scottish  Maritime Museum is not distinguished for the quality of its maritime research, but I was amazed to see that this image is described by them on flickr as of the famous designer on board his "twin-screw yacht."
Clio was WF III's personal yacht. As Sheevra she was found by Donn Costanzo and friends in the Mediterranean and restored. Renamed Clio once again she is now based in the United States. I had a chance to view her fine condition when her owners brought her across for the 2003 Fife Regatta. 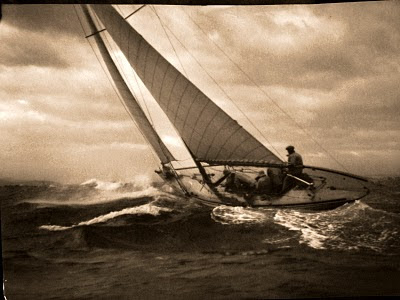 Next is the 1928 Fife 8 metre yacht Cluaran, well reefed down, on another of those dirty Clyde days that give sailing in Scotland its distinctive quality. This yacht also survives today, as Miguell IV. 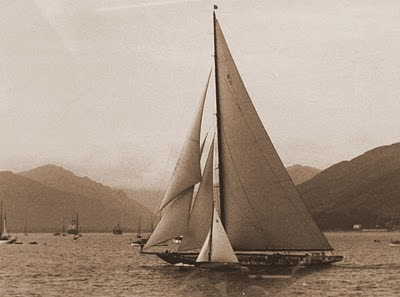 Now for a more peaceful scene. Here is the Islander Bernera getting close to the royal yacht Britannia in the Holy Loch during Clyde Fortnight, sometime in the early 1930s. As we all know Britannia went to the bottom after the King died, but now has several reincarnations worldwide. Bernera of course survives, like almost all of the Islanders. Their story can be read on my other blog http://www.scottishislandsclass.blogspot.com
Posted by Ewan at 02:07 3 comments: Links to this post 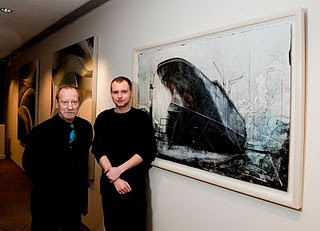 Further to my last but one post, nephew Adam Kennedy, pictured here with writer and actor Bill Paterson, has won the Aspect Prize.
Posted by Ewan at 02:55 No comments: Links to this post 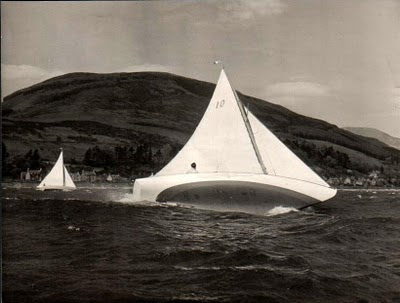 Above is a famous shot of Canna going like a rocket with, I think, Kilcreggan in the background, which would indicate she's in a stiff South-westerly breeze.

I'm not sure of the identity of the photographer, but guess it may have been Ian Gilchrist of Garelochhead and Windward Publications fame.

You can see the exposed propellor shaft of the wing engine. Also the mast is bending, so the luff of the mainsail has gone a bit slack.

Herbert Thom bought Canna in 1948, and it interesting that in 1952 she still had a painted hull, as he eventually had her topsides stripped and varnished, as with all his boats. He reasoned that they were lighter without numerous layers of paint.

I've just finished the fairly mammoth task of writing Herbert Thom's sailing biography. You can read it on http://www.scottishislandsclass.blogspot.com 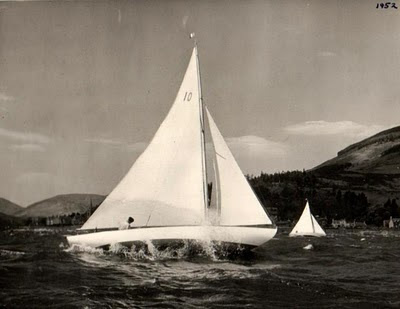