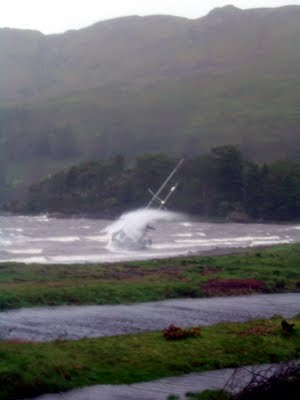 We were warned, at least those of us who followed the Met Office, which correctly predicted a tight low pressure system on Monday, although I suspect that they underestimated the wind speeds we actually got. Even that vapid child on the telly warned that it would be windy, if you could make out what she was saying. I got the Kelpie and Peigi safely onto dry land and checked that everything aboard Stroma was secure.

It started blowing on Saturday, a very brisk and ominous Southerly. It's a time for Spring breaks and a few boats went off, one returning after an hour or so. Sunday continued in the same vein, then on Monday morning it struck. Straight out of the South west and almost unobstructed came a wind of incredible force, raising a blanket of foam a couple of metres high. It was difficult to walk in the prevailing wind, which was, I guess, well over gale force. The gusts were another thing again. 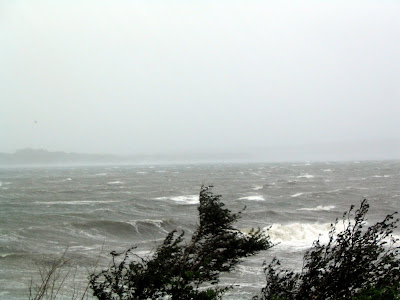 The first couple of yachts came ashore at Fearnach in the late morning, being joined by three more as the day progressed. The roads around here were quickly blocked as trees laden with new foliage came down. We're in neap tides just now, but it didn't matter as the tide didn't actually go out, giving rise to fears that the evening high would cause flooding. 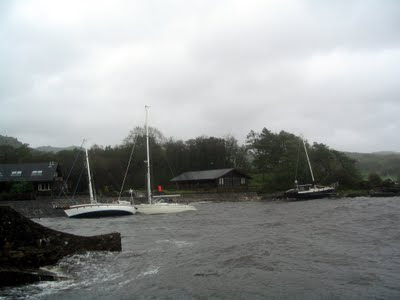 The marinas at Ardfern and Craobh Haven were directly in the line of fire, but spared the terrible swell that started to come in at Fearnach. In our little corner at Loch na Cille the boats were spared the worst of it, as by the time the wind backed West much of the force had gone and everything stayed afloat. 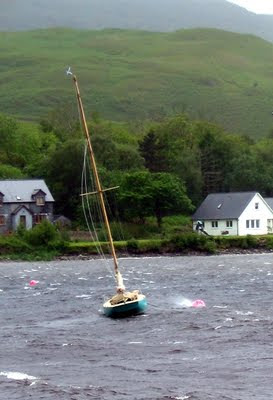 This Tuesday morning the wind is down to force six with showers of hail and we believe that the electricity, which went off when some poles came down yesterday, may come back on by this evening.

So far this year after fifty days afloat we've managed two short sails. Much more of this and I may take up gardening (only joking).
Posted by Ewan at 04:07