The Tale of the Seagull-frying Machine

The image above is only tangentially connected with the story that follows. It depicts an incident in the summer of 1978 when the yachts were returning to Oban Bay and the Unities had depleted their stocks of strong drink. The Stromas were able to render assistance, luffing up close under the lee of the Unity and handling over glasses of a concoction made from cheap whisky spiced with a liberal dose of Crabbies patent green ginger wine. This is the only original work by the late John Gardner I possess, done on a postcard as he sat in the Mishnish many years later. The connections will become obvious as this tale progresses.
Late one evening in early August about thirty years ago John and I had emerged from the Mishnish after a pleasant evening discussing such matters as the advantages of lanyards over turnbuckles and the delights of Number Three Rippingille stoves and strolled over to the Tobermory Pier, where we found lying alongside a stylish fast cutter, let's just call her the Virtuous. 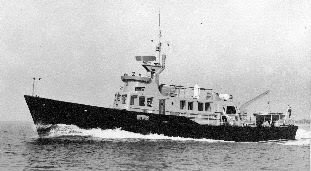 As we were admiring the ship her commander came on deck and the following conversation ensued.


Our new best friend the Commander proved a charming fellow and showed us round his ship. We marvelled at the enormous engines and a curious device formed from stainless steel, the purpose of which was no doubt explained but soon forgotten. Then he invited us to descend into the depths of his command.
Down a steep metal stair we went to a small plainly-furnished cabin and were soon sitting round a table in the middle of which stood a very large round old-fashioned teapot, the sort of thing that might once have featured at a Sunday School picnic.
"I'm afraid this is a dry ship," said the Commander, "but perhaps you would like something from the teapot?" as he placed three small glasses on the table and filled them with a cold slightly pink liquid that proved not to be tea.
For an hour or two we enjoyed the contents of the teapot while the commander regaled us with tales of maritime adventure and chases on the high seas. We learned that the Virtuous could travel extremely fast, but at the expense of rapidly depleting her fuel supplies. Trawlermen knew this and would steam seawards in the hope that they would out-diesel, rather than outrun the Virtuous. In the pre-computer age the calculations of how fast he could afford to run in order to catch his prey and escort her to port required great mathematical gymnastics on the part of the Commander.
Footsteps were heard on the deck above, some tourists who had climbed aboard wanting a guided tour of the ship. The Commander suggested to us that as he was a little tired and John, who was wearing his trademark sturdy dark blue navy pattern jersey, looked official and was plainly knowledgeable we should undertake this on his behalf.
The tour went well, as John explained  about the fuel calculations and passed on some of the commander's stories, until one of the visitors asked the purpose of the strange device referred to above.
"Ah, Madam, that is for when we are far from shore and food is running low, we catch seagulls and place them in this frying machine. They are delicious when served with vinegar."
Posted by Ewan at 13:53

Email ThisBlogThis!Share to TwitterShare to FacebookShare to Pinterest
Labels: argyll, Mishnish, prevention service, The Riddle of the Sands, Tobermory