Another Buchanan and some Olympic Nonsense 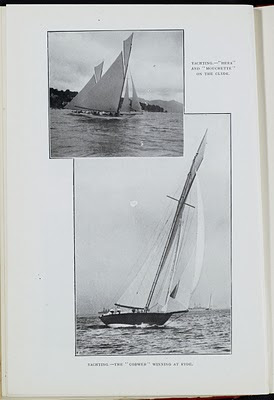 John Buchanan was born on New Years Day 1884 into a family of fabulous wealth. His father Francis C Buchanan described his employment in the 1891 Census as "living on own means" and at that time the family were living in a seventeen-roomed house in Rhu. Further back in history the family belonged to that elite group of Glasgow merchants whose fortunes were founded on the tobacco trade, slavery, shipping and finance. They lived in a massive townhouse on Blythswood Square opposite the Smith family whose lovely and dangerous daughter Madeline famously charmed a jury of Edinburgh gentlemen. It's possible that Buchanan Street was named after a distant relative. I don't think John would have had to work very hard, if at all, and he certainly devoted most of his life to yachting.

Like his fellow, near namesake but unrelated, yachtsman James Buchanan, John was a joiner, being a member of the Royal Northern, Royal Clyde, Royal Western, Clyde Corinthian Yacht Clubs and the Loch Long Sailing Club.

At the age of twenty four John Buchanan was part of the crew aboard Sir Thomas Glen-Coats' twelve metre yacht Hera taking part in the 1908 Olympics. This yachting event or match, as it was termed, was a little strange because there were only two entries, so everyone was guaranteed a medal, be it gold or silver. Further, both entries were British, so they helped the country's tally regardless of how well they did.

There was a slight international flavour, as the other entry, Mouchette, came from Merseyside, although her owner Charles MacIver was also of Scottish descent. The teams decided not to bother going to the South of England and on the toss of a coin the match took place on the Clyde. Hera duly won, helped a little when Mouchette found the way ahead blocked by the moored steam yacht Hebe.

John Buchanan owned a number of yachts during his sailing career, including the 19/24 Shireen, two big old boats called Llygra and Pallas, then the Fife eight metre Falcon, before buying Stroma from her first owner George Nisbet in 1937.

In his first season John Buchanan managed only one win out of twenty three starts. He did a bit better in 1938 with three firsts out of a total of ten places, but was plainly disappointed and decided to blame the boat, because at the end of that season he sold Stroma and bought Herbert Thom's old Westra. He did rather worse in 1939, managing just one win and no places at all from 13 starts. He doesn't feature in our story thereafter, because racing stopped for the War and he died at the end of 1943.
Posted by Ewan at 04:24