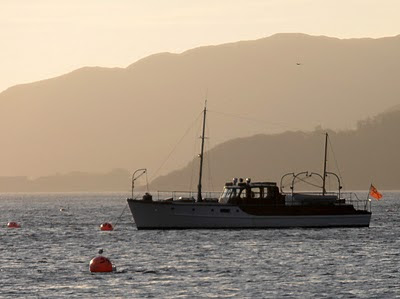 Most of the local boats are laid up now, Stroma included, sitting safely under her winter cover. The moorings are of course still out, so this has always been a good time for hardy souls to do a bit of late-season cruising. Not that the people aboard this lovely stylish motor yacht will exactly be slumming it in the cold and wet.

This interesting and quirky cat came in last night and obviously didn't need to lift a mooring. 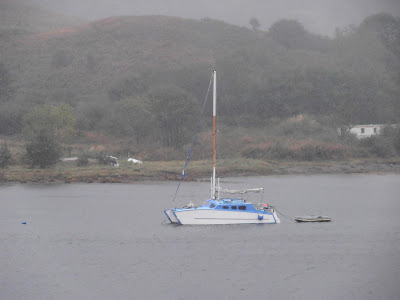 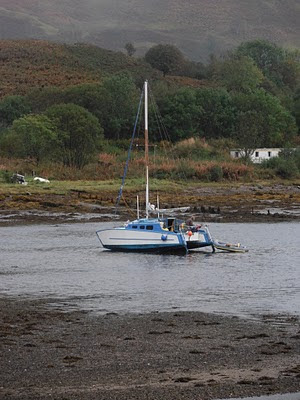 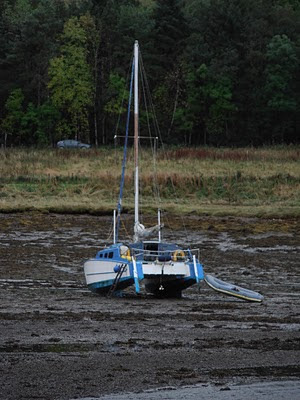 Another interesting visitor was the lovely yacht Mat Ali. Her owners, Charlie and Mary, invited me to a day out with them as they neared the end of their first major cruise. They had been living aboard for a month and there are very few boats on which that can be done in comfort. 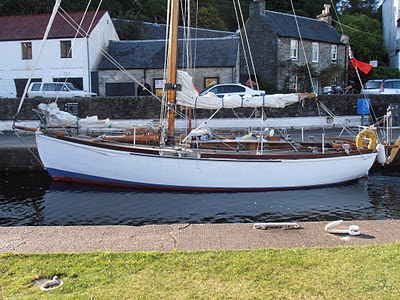 Mat Ali's origin could have been written by Joseph Conrad. She was commissioned by a veteran of the First World War, who had obtained the grant of a tract of land in Malaysia to operate an oil plantation. There was an enormous tree on the land, of an extremely hard oriental hardwood, which he eventually had cut down and milled to provide his yacht, built in 1935 by a local builder named Mat Ali to a Harrison Butler design. On completion she was shipped to the Mediterranean and then sailed home by her owner to Cornwall, where she remained until recently. 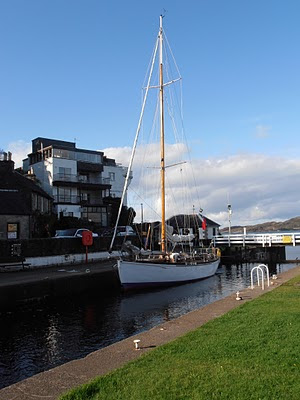 I took these images after we had spent an interesting and educational day. With a wind of Force Four to  Five we ran out through the Dorus Mhor with the tide, then spent the day basically beating back against it. Despite her robust look and at twelve tons a heavy boat for her thirty two foot length this is one fast yacht. In the stronger winds she was easily making seven and a half knots and in five hours we covered twenty six nautical miles through the water, mostly tacking back and forth over the same piece of landscape. It was fascinating to compare our perceptions of where we were heading with our actual track as plotted on the sat-nav. At the end of the day our course was a tangled cats cradle of crossing lines.

My next shot is of a fine wee visitor from the South, an English Nutshell built by her proud owner Tom, who has been a regular visitor here for many years. Like many others he has been appalled by the threat to our local sailing waters from the fish farm menace. 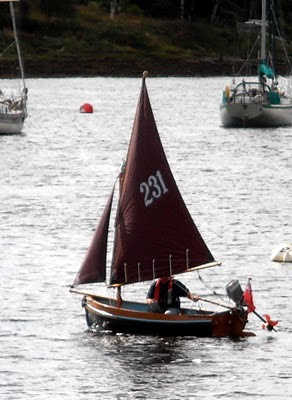 Finally a picture of the Hebridean Princess, which I took from Mat Ali the other day. She had a career as a Calmac ferry until a previous government found an excuse to sell her off, following which she has become an extremely luxurious holiday ship, specialising in short cruises on the West coast. When I took this shot she was on her way to one of her favourite anchoring spots, Port na Moradh, which just happens to be exactly where Lakeland are proposing to establish their massive new industrial fish farm.

It's terribly important that all who care about the threat to our scenic landscape and the local, visitor-dependent, economy should register their views with Argyll & Bute Council. Full details of the campaign, including how to object, are on the dedicated website, http://www.saveseilsound.org.uk. 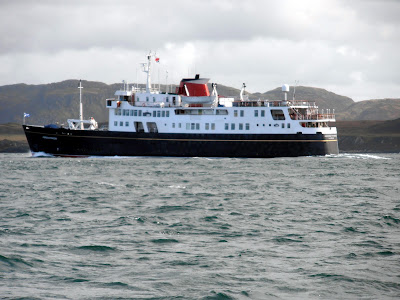