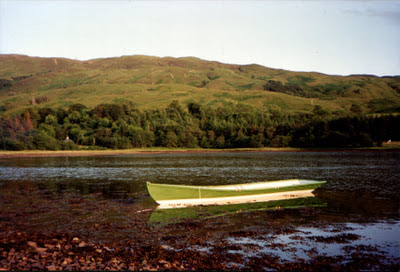 The late John Gardner of Mystic Seaport was apparently unable to pursue a teaching career on graduating from Columbia because of his political views, but formal education's loss was a great boon to the wooden boat community. Very few people combine practical ability with good writing skills, but his books on building classic small boats are so clear and inspirational that each chapter seems to cry out "please build me".

So I found myself while building the Swampscott dory in Volume one devouring the other chapters and wondering which would shout the loudest. In the event the modified Quincy skiff won out and became my next project. At the start of the chapter on her the Guru writes that she


“should row well, but build easily and cheaply. This is not a racing shell, obviously, nor is it intended for the open sea. This simple skiff should do well on lakes, large rivers, and sheltered waters along the coast.”


There were aspects of the construction that seemed particularly intriguing. She has an almost flat bottom formed from four softwood planks spliced together, two per side, to form chine logs that will be cross-planked over later.

Once cut to shape, the logs are set upside down on horses positioned at a convenient height, then suitably bevelled, and the transom and stem are added. Next the enormous plywood sides, over eighteen feet long and each needing two scarfs, are tortured into shape.

The book didn't actually say how difficult it would be to do that last bit, nor did it point out that a dry fit usually goes rather better than the real thing. I did this build single-handed and could have done with a helper to control the plywood sides, sticky and slimy with glue, as they slithered around on the temporary building moulds. Bringing the sides together was a real struggle, as I had decided to add both at once, in order to balance out the inevitable stresses on the jig. For a while this caused me a real panic, until I decided to screw battens to the plywood sides to get a proper grip on them. The battens could then be subjected to a lot of force with Spanish windlasses.

Fortunately I wasn't using a fast-hardening glue, and I eventually managed to close the gaping spaces at the bow at the expense of a lot of cursing and badly blistered and glued hands. After this planking the bottom and adding the seats was pretty simple.

The result was a stylish and very unusual rowing boat. The only problem was that we don't live on a lake or large river, nor is our coast all that sheltered. Perhaps I had skipped over that first paragraph in my eagerness to get building. With her flat bottom and long slab sides this skiff is no boat for a cross wind of any strength, or a seaway. In a calm she's a delight to row and my wife still recalls the trip we had one very crisp and sunny New Year's day, travelling effortlessly over four miles down our loch and back.

Because calm days don't happen often in our part of the world the skiff passed fairly soon into the hands of friends who did live beside a sheltered loch, whose sons got great use out of her. They are now grown men and the family have moved on, but the skiff is still on the lochside, more than twenty years later and reasonably serviceable, although some of her bottom cross-planks have been replaced from time to time. 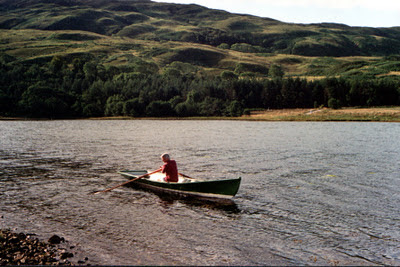 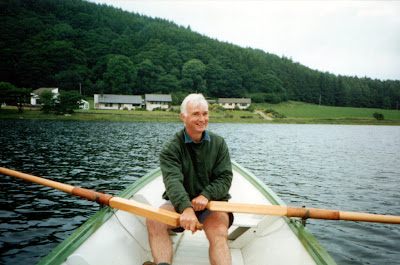 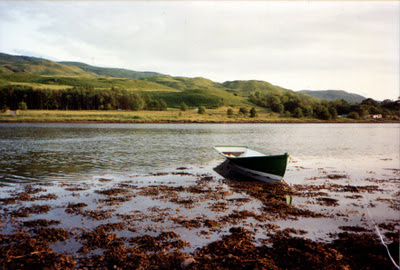 Dave Gentry has kindly allowed me to share some photos he took of this Quincy skiff doing good service in the catering trade. He has a fascinating collection of designs on his own website, here:- http://www.GentryCustomBoats.com 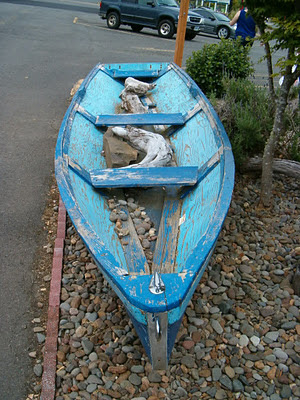 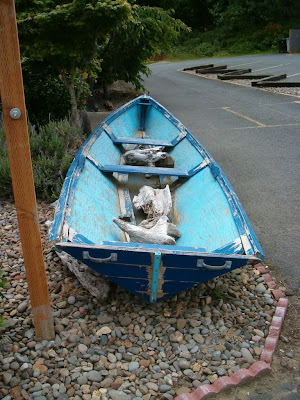 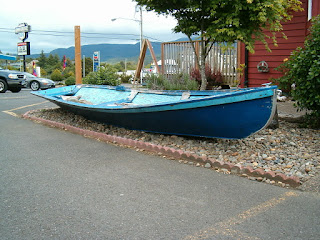