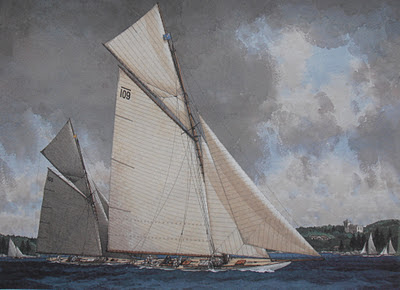 For Olympic year 1996 John Gardner produced a series of former competitors, which I am happy to show here.

Above is Magda IX, designed by Johan Anker, the Norwegian winner of the Gold at the 1912 Games held at Nynashamn in Sweden. Sadly there were only three entries, the others being Erna-Signe from Sweden and Heatherbell from Finland. 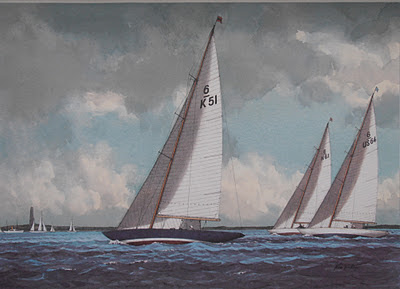 Next we move on to the 1936 Berlin Olympics, the sailing events taking place outside Kiel. The British entry Lalage, designed by Charles E. Nicholson, won the Gold, after a tense series of seven races at the end of which Lalage, the Swiss Ylliam III and the Norwegian Lully II were all equal on points. Unexpectedly the Swiss entry was then disqualified for infringing the amateur status rule. In the redistribution of points between the other two Lalage came out one point better to win the series. 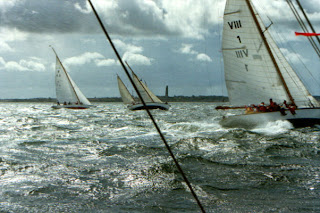 In his mind's eye John must have been on almost the same spot I was sailing over in 1998 when I took this picture during a race in quite windy conditions. You can see the U-boat memorial in the background in both images. 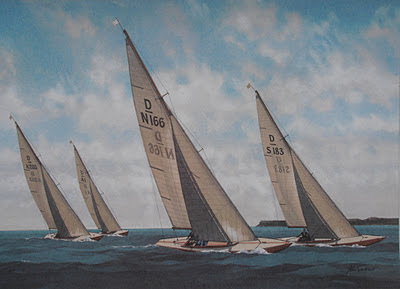 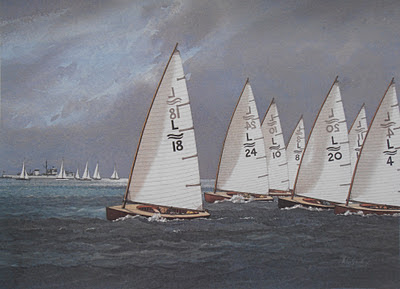 For Helsinki in 1952 the Swede Richard Sarby designed the Finn Class for single-handed racing with an unusual rotating rig and unstayed mast. Competitors drew lots for identical boats built by Borreson of Denmark, whose Paul Elvstrom won the series with four wins, beating Britain's Charles Curry and the Richard  Sarby himself picking up the bronze. 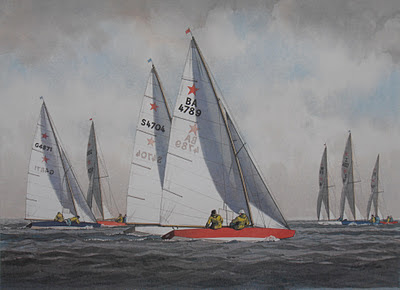 Next we have the Star Class at the 1964 games on Enoshima Bay near Tokyo. The Bahamas entry Gem took the gold, the American Glider the silver and Sweden's Pelle Pettersson the bronze. 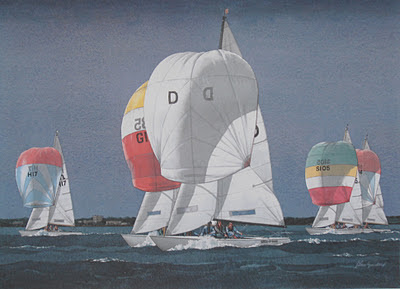 On Lake Ontario in 1976, in Solings, Denmark's Odds-n-Ends took the gold despite only winning one race, the Americans took the silver and the East Germans got the bronze. 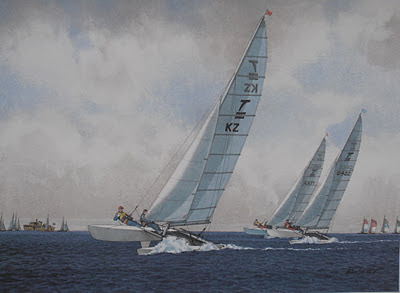 Finally John Gardner chose to depict the Tornado catamarans at Long Beach in 1984, the gold going to New Zealand with a boat built by Reg White of Brightlingsea, Essex, the silver to the United States and the bronze to the Australia. With one hull out of the water these machines can easily reach twenty five knots.
Posted by Ewan at 10:17