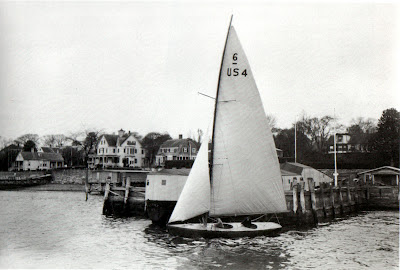 Thanks to a sharp-eyed contributor to this blog, Allen Clarke of Dartmouth, the mystery yacht has been spotted in the South of England, where she is evidently all shipshape and Bristol fashion, in more ways than one, having been launched in Bristol Rhode Island in 1921 as design no 861 of the Herreshoff Manufacturing Company. 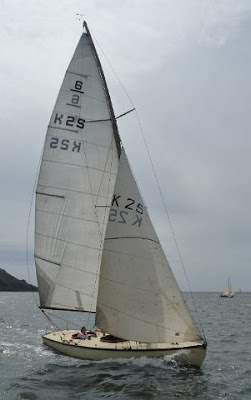 She was the first boat built by the company that they hadn't designed in-house, being from the pen of W Starling Burgess, whose assistant and no doubt partner in the drawing work was the thirty year old L Francis.

Sheila was commissioned by her first owner Paul Hammond to compete in the inaugural British America Cup Races and was shipped along with two other six metres from the Seawanhaka Corinthian Yacht Club to the Isle of Wight in the Summer of 1921.

It seems the American's weren't too successful in the first series, something they rectified later.

I don't know who bought the Sheila from Mr Hammond, but in 1933 she was acquired by Iain W Rutherford, who converted her for cruising by closing in the forward hatch, adding a mizzen and the huge windlass I noted in my last post. He also renamed her Suilven, after the famous Scottish mountain, although she has now reverted to Sheila and carries sail number K25.

Mr Rutherford and (I guess) his wife are probably the cosy couple in my original pictures. They cruised in Suilven extensively around the North west of Scotland, also managing a trip to Norway and a circumnavigation of Ireland, until 1938 when he bought the eight metre Pleiades of Rhu. He wrote about his trips, and his wartime experiences, in his book "At the Tiller".

I reckon that conditions in a converted racing yacht must have been pretty extreme, compared to those in something designed for the job. Nearly forty years ago I nearly bought the six-metre Nada, a William Fife III design, when she was lying at Dumbarton in terrible condition. Her cockpits had been covered over to keep the seas out leaving a couple of small hatches for access and the helmsman with a shallow fibreglass tray to sit in, there being a pair of steel lugs to which he could attach himself. Down below presented a long, narrow, dark, dank space equipped with a row of pipe-cots, although on a long beat across the North Sea I imagine you would probably be sleeping more on the side of the hull than in your berth. She had apparently made several long sea voyages in this configuration.

Periods spent in cruising rig have of course enabled many of these old treasures to survive, Nada included, as she's now again in fine racing trim.

Sheila is a lot less extreme than Nada and her principal dimensions are interesting, considering her year of design. They are:-

Very similar to my own Scottish Islander of 1928, which has been compared to a sawn-off six, but Sheila has a longer waterline in an even shorter hull.

She's much shorter than Fife designs of the same period and I guess that W Starling Burgess and L Francis were expecting rough conditions in England and designed a powerful short hull rather than a long slender one that would be better in light airs. In any event she's incredibly modern for her year and it's a pity she didn't do better. It would be interesting to find a report of the racing, which no doubt will be somewhere within the Seawanhaka archives.

I'm going to give Allen ten out of ten for spotting Sheila and myself five for getting some of my guesses right in the last post. She was a much earlier design than I thought, although the photos were from the thirties and she doesn't have a fin keel, see here:- 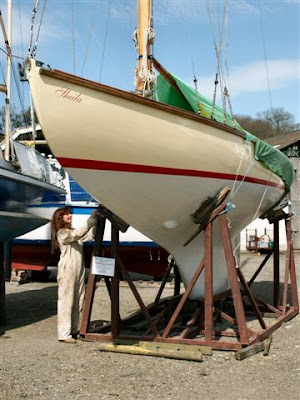 The mast had been built curved, Swedish square-metre fashion, to improve the aerofoil shape (although it added weight aloft in pre-carbon fibre days).

And of course she has a wee tiller below the deck, in common with most sixes of the time.

I hope that our American friends are pleased to find that the product of two of their best-loved masters of design survives after ninetyone years.
Posted by Ewan at 04:27