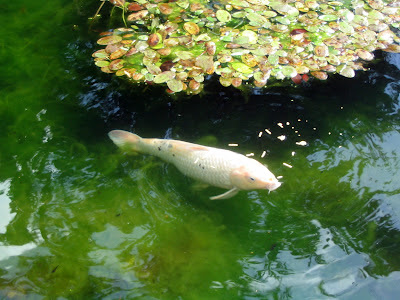 For over thirty years he patrolled his watery domain, a languid fin-flip enough to propel him gently from one muddy little corner to another. Sometimes he'd be difficult to spot, perhaps lurking under the floating umbrella of the waterlilies or maybe hiding in the chinaclay chimney pot that Peter had so thoughtfully chucked into the pond and he'd adopted as his own. He'd spend hours in this private space, sometimes re-emerging backwards by the way he went in, sometimes shooting out forwards. It would be pointless to try to work out what goes in the mind of a carp.

When we first met him in 1984 he had a number of chums, but gradually they went, some saying they'd becoming victims of the visiting herons, others hinting darkly that Spencer had got bored with them, or perhaps just hungry, and had eaten them. Regarding this latter possibility I'm afraid he had some form. Each Spring his peace would be disturbed by a crowd of totally amoral frogs, who would cavort in the most unseemly ways, quite naked, right in front of his pink old eyes. He would get his revenge by devouring as many of their progeny as he could snaffle down and those were among the rare occasions when he showed much of a turn of speed.

In the early years he wasn't called Spencer, that name arrived with his current custodians, but he never answered to it anyway unless the call was accompanied by a scattering of fish feed on the surface.

All thought that with age he had acquired a capacity to survive almost anything. In the prolongued freeze in early 2011 he lay immobile for weeks under several inches of ice, astonishing all with the first tentative flickers of a fin when the thaw eventually arrived. His end came while his carers were off steeping themselves in the cultural delights of Iowa and only a few scales were left as clues. He had grown far too big for the herons and it seems likely that some crafty otters spotted him and carried him off for their tea. I like otters but rather hope that tough old Spencer gave them a nasty case of indigestion.
Posted by Ewan at 06:31