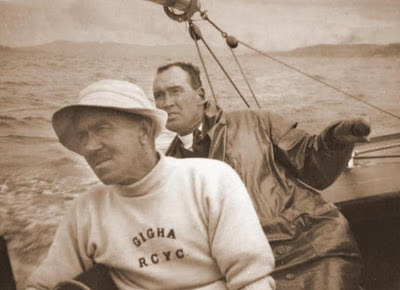 Just when Herbert Thom was looking for a new challenge he was approached jointly by Alexander Robertson & son and David Boyd, who suggested that they produce a new six metre for him. The result was Circe, which was Boyd’s first design for a metre boat. By the end of 1937 Circe had won 24 flags including six firsts, the largest number in any class, despite being dismasted on the first day of Clyde Fortnight. The Glasgow Herald reported that her helmsman already had 312 flags in 12 years, so was now up to 336.

When it was decided that a team of British sixes would contest the British America Cup and the Royal Northern yacht Club challenged for the Seawanhaka Cup, Circe had to be involved.

The British America Cup would go to the first team of four to win four races. Team racing requires a different cultural approach, a profound knowledge of the rules and the confidence to put boats at risk and get away with it. It’s best done on true one-design boats, which six metres patently are not. I suspect that the British team would have had little if any experience of this type of competition.

The Scottish yachts were duly craned aboard the Anchor liner California, while Herbert Thom, accompanied by his mother and son John travelled on the Donaldson Line’s Letitia. The cost to each owner would have been about £1,500, a very substantial sum.

The races were a disaster for the British team. In the first race, sailed in variable but mainly light conditions, the Americans got first, second, fourth and seventh places, with Circe last. In the second race, sailed in a nice breeze of 10 to 13 mph, the Americans forced Circe and Vrana over the start line and they were recalled. The Americans got first, second, third and seventh places, Solenta at fourth was the best British boat and Circe came sixth.

The next day the wind was very light. Djinn forced Solenta and Circe over the start line at the expense of being over herself and all three got recalled. Later on Djinn fouled Circe and Henry Morgan promptly withdrew. The British boats were now generally doing rather well, when the race committee decided that the time limit of four hours would not be met and cancelled the race.

On day four Goose luffed Solenta and collided with her, causing both to protest. The yachts had been only five feet apart when Goose’s skipper put his helm down hard and at the subsequent hearing she was disqualified. As this was a re-sail of the third race Djinn remained disqualified for her skipper’s behaviour the day before. The British skippers pleaded with the committee to waive this and allow Henry Morgan to compete, but the rule was enforced, so the Americans had a serious handicap. They got the first and second places, but still lost on points. Circe came fourth.

In the fourth race, day five of sailing, there was a good breeze. The Americans won with first, second, fifth and eighth places and Circe came fourth again.

The Americans won again on the final day with first, fourth, fifth and sixth places in very light airs. Circe, considered to be a heavy weather boat, came seventh.

On the evening of the last day the Seawanhaka Corinthian Yacht Club declared that Goose would defend the Seawanhaka Cup and the Royal Northern nominated Circe to challenge for it. It is unlikely that the challengers felt they had much of a chance, but by now Herbert Thom had had time to learn about the local conditions. For the challenge he had his pick of crew from all the British boats. 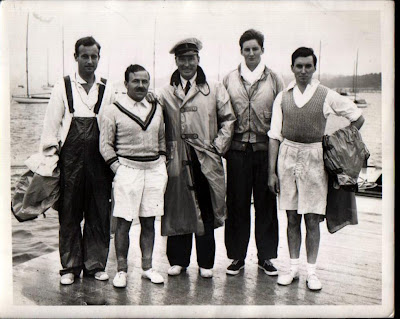 He selected William MacAusland (the wee fellow in the picture) from Mr Teacher’s Erica and Sandy Baird (on the left, later Harbourmaster at Bermuda) and Murray Maclehose (the tall chap on Thom’s left, later to be the Governor of Hong Kong) from Maurice Clark’s Vrana to sail with him and his son John (extreme right). He selected the best sails from all the British boats too.

On the first day of the series any American complacency was severely shaken. The Glasgow Herald reported,

“It was a nasty day for sailing, judged by the standards of ladies afternoon sailing parties. There was an easterly blowing up the sound, seventeen miles an hour at the start and clear to twenty five at the finish. It was piling up a real sea, steep, rugged navy, and out of the low grey clouds heavy cold rain squalls sluiced down now and again. Maybe Circe thought she was back at home in her own Firth O’ Clyde waters, for it was a dour day for these parts. At any rate she went, and Goose, fastest all-around yacht of the American sixmetre fleet, couldn't hold her under the conditions.”

The second race had a triangular course, sailed in another blustery day. Herbert Thom gave Circe a perfect start and Goose couldn’t catch her, finishing twenty four seconds behind.

The third race was sailed in Goose’s weather, a light easterly with a windward/leeward course again. Goose had by far the better start and covered Circe as the latter tacked several times in quick succession. Suddenly the wind whipped round to the southeast, giving a reach to the windward mark, at which Goose was two minutes thirty-five seconds ahead. The return was now a reach in about seven miles an hour of wind and Goose rounded the next mark just over five minutes ahead. There was now a run to the original weather mark. Circe made up a little and was four minutes ten seconds behind at the final turn.

The final leg was now a beat. The wind died and both boats drifted along, Circe holding inshore of Goose. Herbert Thom must have scented a land breeze, because while Goose lay becalmed Circe silently eased sheets and started moving very gently, gradually overhauling her and steadily easing sheets again, picking up speed, while the crew of Goose could only sit and watch. The wind eventually reached Goose, but it was too late. At the very end she tried the expedient of setting her spinnaker, but to no avail. Circe finished half a minute ahead and won the Cup.

After their return from the States the Russells stayed with six metres and commissioned a new boat, Mara, from Alfred Mylne. Their yacht Kyla has enjoyed a long retirement and now sails, fully restored, in France.

Herbert Thom successfully defended the Cup against a Norwegian challenge on the Clyde in late 1939. He then sold Circe and went back to the Islanders after the War, commissioning a new yacht Canna. He continued in his unbeatable ways, winning virtually everything until by August 1963 he was exhausted and, perhaps mindful of his father’s history of heart trouble, decided to retire. Over a racing career that lasted 60 years Herbert Thom had won 690 flags, including 453 first places. He died in 1986 at the age of 96. 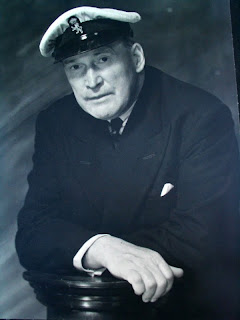 Circe didn’t enjoy a happy retirement. She was sold to the Russians who took her to Helsinki for the 1952 Olympic Games, where they came a bad last. The story in Finland is that afterwards they held a party and barbecue during which they burnt Circe. Only her drawings remain, in the archives at Kilmory, Argyll.

Of the American boats Bob Kat II is believed to be still around, possibly in Italy, while Goose has been fully restored and is based in Puget Sound, Washington State.