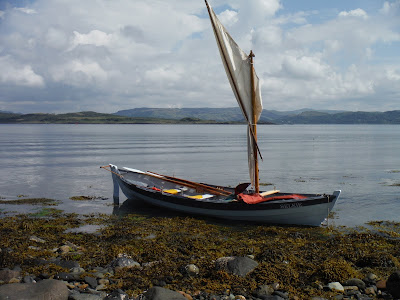 It was that time of year again, when some of us get called out for service on the Bilderglug Fleet. This time someone had the idea of borrowing the Selkie from the kind islanders of Seil in place of our own ships. The idea germinated into a full-blown weekend of experimentation to see how Iain Oughtred’s wonderful creation would perform under sail and also to test the feasibility of cruising in an open rowing skiff. There was relief all round when the Admiral announced that he had no objection.

There’s a very serious side to what follows, so this post continues with a disclaimer- don’t try this at home!

Rowing skiffs such as the St Ayles are designed specifically for rowing, with slender lines to provide a sleek, easily driven hull. They will not necessarily possess sufficient reserve stability to be safe boats under sail. By contrast a substantial working boat, such as my own Christmas Wherry, will take any amount of wind, sea and bad weather but it’s a tough pull to heave her through the water under oar. We approached the weekend with great care and the knowledge that the Fleet included a couple of engined ships that would never be far away. Secure in the knowledge that our friends would look after us if need be we set up the Selkie with my wherry’s sprit rig. 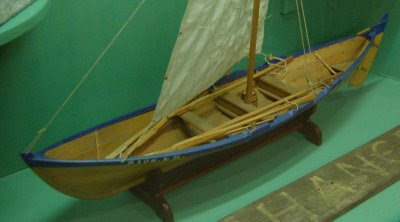 Purists will point out that the original Fair Isle skiffs, from which Iain’s design was developed, carried a low aspect dipping lug rig and were presumably sailed whenever possible. That’s as may be, but we don’t know the conditions under which they sailed, whether they had a load of fish aboard or whatever. The modern view would be that an unboomed dipping lug is not a particularly safe rig in any small open boat. Sprit rig has a number of distinct advantages over the lug and properly set up is efficient and easily handled. It drives well to windward, but its main advantages come when coming ashore or if a sudden squall approaches, when the sail can be brailed in to the mast in a jiffy. In a really serious situation the sprit can simply be hauled out, so that you’re left with half the area in a cut down leg of mutton shape.

The weekend was to prove that the skiff is certainly able to be sailed under a suitable rig in safe conditions. Winds were light but she managed a tack angle of about 110 degrees and came about easily with the help of the wherry’s little jib.

As far as cruising a skiff was concerned the three of us aboard had plenty of space for our tents, gear etcetera, but had we been five up space would have been a little tight. What follows is a log of the trip. 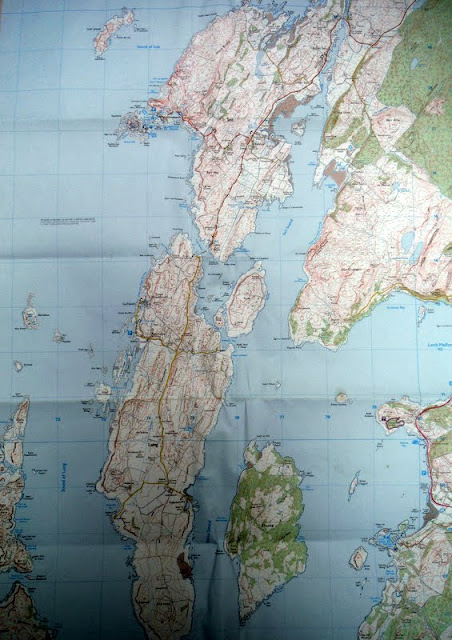 Tides were very important in this trip, as the streams are strong locally. It’s often not understood that in Seil Sound the flood tide tracks the Eastern, Ardmaddy side running North until the Sound narrows, then follows the shore down the Western, Seil side Southwards into the Cuan Sound, so that the guide tells us

Many don’t appreciate that although the stream direction changes the water level continues to rise or fall up to high or low water respectively. All very confusing but also important.

The effect of this was that leaving at about 1800 BST we could follow the Seil shore down with  the stream and then fork West into the Cuan Sound with an increasing tide in our favour.

With three rowing and one coxing we tramped along in a lovely sunny afternoon and  soon reached the Cuan, closely following the Torsa shore and passing inshore of Eilean Fraoch and Glas Eilean (heather island and grey island) to reach the narrow passage between Torsa Beag and Luing. We were inspected by several members of the local seal families who inhabit the bays and haul-outs in the Sound.

The tide was flowing fast against us in the passage, but it was easily stemmed by some firm paddling and we passed through Ardinamir to rejoin Seil Sound. There followed half an hour or so against the last of the flood tide, enlivened by Topher’s recounting the tales of Emanuel Pyecroft, until at 1720 we beached for the night in Kilchattan Bay. 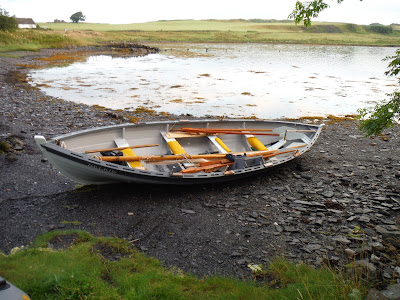 Day Two Saturday 27 July, HW Oban 0831 and 2058 GMT, hence the stream going Northwards from Ardluing from about 1400 BST. Crew this day, Topher, Jan and myself, with coxing by Laurence. 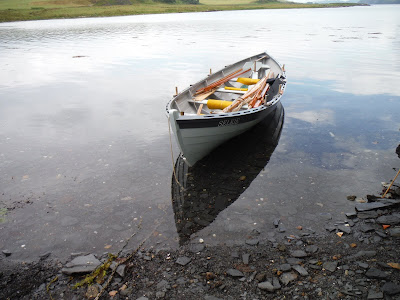 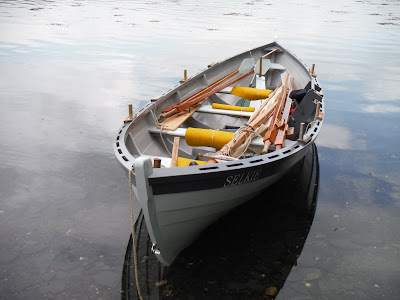 After a pleasant breakfast we had a nice row South with the ebb against a gentle breeze to beach at Bagh na h-Aird (the bay at the point) for lunch and a look at the yachts in the West Highland feeder race from Oban. Setting off about 1330 BST we rowed round to Ardluing, then unbrailed the skiff, hoisted the jib and had our first experience of a St Ayles skiff under sail. The last of the ebb was bringing the stragglers over the finish line off the buoy as we drifted past in what promised to be a hot afternoon. 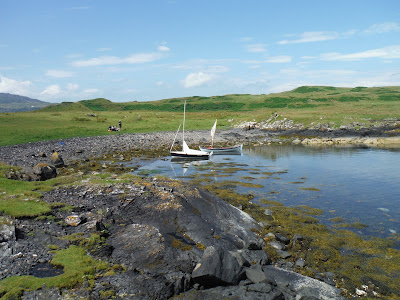 Despite us all being old sailors we soon decided to return to the oars. With three rowing and Laurence at the helm we got along at a good steady clip, the tide increasing as we travelled North into the swirls between Fladda and the Dubh Sgeir, then across a wide stretch of glassy water past Easdale and on to Insh. We followed the shore line closely to inspect the hermit’s house, built into a cave with glazed windows and a drystane patio perched high on the cliff. 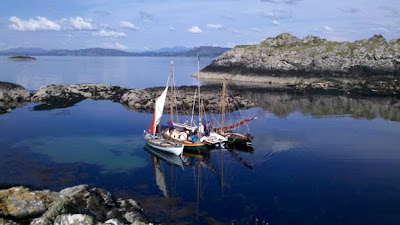 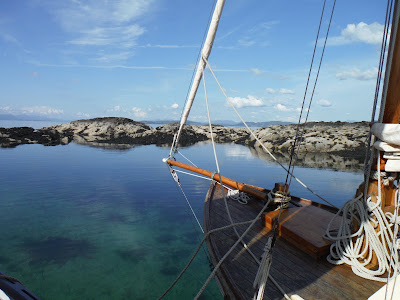 Our destination for afternoon tea and cake was the lagoon in the North of Insh, a place of astonishing beauty that could easily be in the Pacific. It disappears at high tide, when it can become unsafe in the Atlantic swell and any weather, but was idyllic and safe for our visit. We were beginning to learn that skiffs have distinct possibilities not shared by other craft. In the now windless conditions our friends in their Wayfarer had endured a long tow behind the Minna and we reflected that had we been aboard our own boats we would have shared their fate. 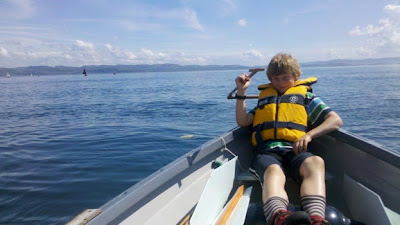 After tea we rowed round the North of Seil to Puilladobhrain (pool of the otter), where the skiff could thread her way with care through the reefs and save a mile or so of effort. We beached at about 2000 on Eilean Buidhe (yellow island) near the wreck and in a place far too shallow to be troubled by yachts. 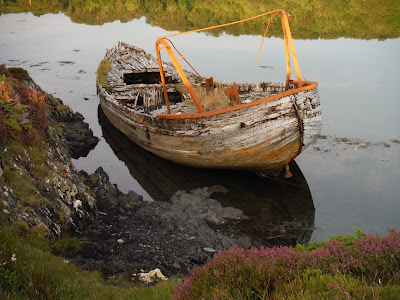 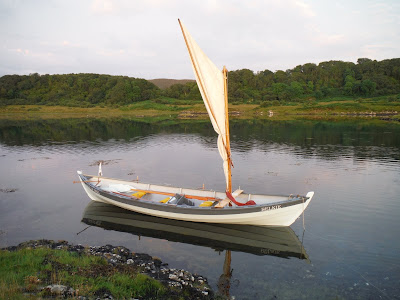 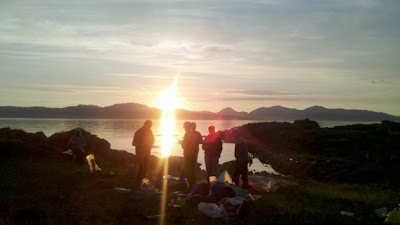 Total distance travelled about thirteen miles, one under sail.

We woke to pouring rain and one of these days where you are reluctant to leave your tent. Unlike our friends with masts those of us in the skiff had no worries about passing under the Bridge. They on the other hand had to balance having sufficient not to ground on a falling tide with having sufficient clearance and there were worries that tidal predictions are not always quite accurate.

In the event the Admiral had it right. We set off at 0930 BST and all passed down the channel on high water with nearly a metre of clear air above the masts on the Minna and the Back Magician. 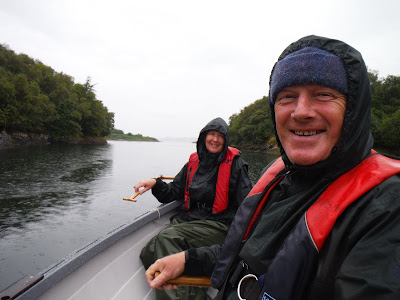 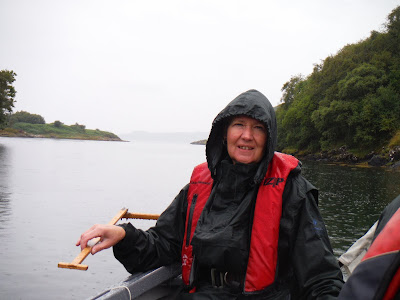 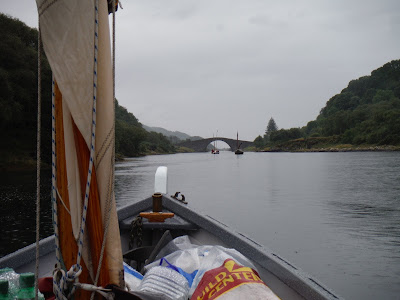 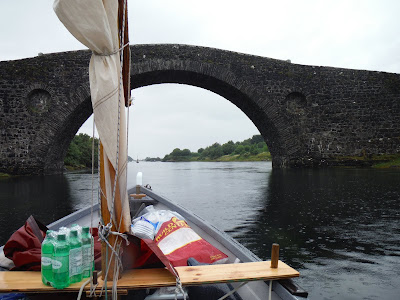 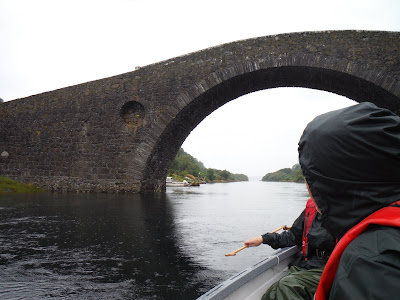 Clearly in Calvanist country we shivered in the rain and felt we were paying the price for the previous days of lovely sun. We tried a bit of sailing but the inactivity made us colder and we were happy to beach at lunchtime in the North of Shuna, our chosen campsite. 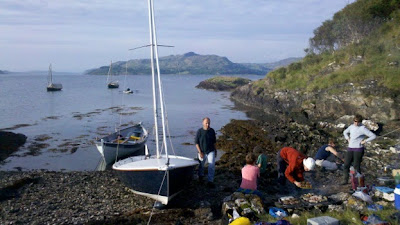 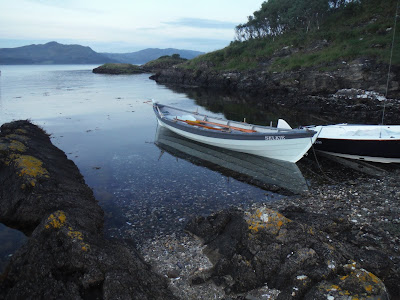 After a nice hot lunch the sun came out and we introduced some of our friends to the delights of skiffing, making a brisk mussel-hunting excursion to Eilean Gamhna (calve island) just a sufficient distance to bring up blisters in hands unused to rowing. It was good to get the tents and clothing dried out and have time to prepare a nice dinner. 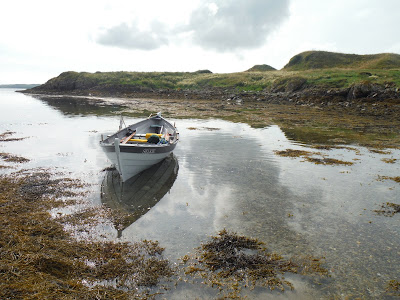 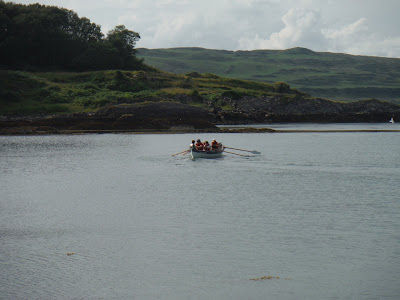 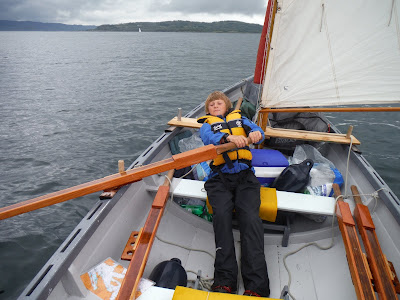 Afterwards Laurence and Thomas got us all building reed boats, which sailed with varying results. 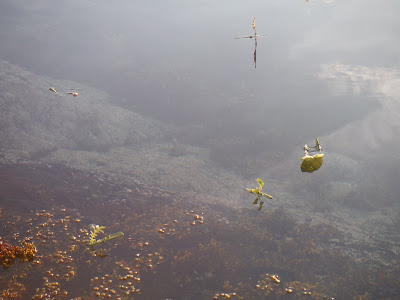 Another wet morning followed, but with a promise of better conditions later. With a Force Two South westerly we tried a couple of hours of sailing before the cold got the better of us and we went back to rowing to warm up.

We sailed enough to discover that the skiff tracks nicely in light airs. Surprisingly she carried a little weather helm and in careful hands could be put about without stalling. She was very stable and we felt that we would be happy to try her in stronger winds. The main thing learned was that she balanced nicely under a modest rig set far enough forward so as not to interfere too much with rowing. There are definite possibilities for skiff-sailing.

We abandoned our sailing experiment to concentrate on the serious business of catching our dinner. We rowed up to the Cuan Sound where we could set a line in the tide and soon had three fine codling aboard, caught each time close to the seabed on our bottom hook.

Our final port of call before returning the Selkie to her station was a sentimental visit to Port na Morachd (port of the big i.e. important people) an historic port of refuge full of history and now threatened by a massive industrial fish farm just offshore, which Argyll & Bute Council has just unanimously consented despite a huge mailbag of objections, including well over 100 from residents of Seil, Easdale and Luing. The main drivers of the local economy here are tourism and leisure and bizarrely the same council is promoting a kayak trail through the Sound.

It felt appropriate to make a last visit to this lovely bay before it becomes out of bounds. Coming ashore we discovered a feature that I had certainly not noticed before, a line of huge stones almost certainly the remains of a Viking or early Scottish boat noust.

This area is steeped in archaeology, with Port na Morachd overlooked by the pre-historic Dun Fadaidh on the mainland and Caisteal nan Con (house of the dogs) on Torsa. I am fascinated by the castle. It is generally supposed to have been a hunting lodge of the MacDougalls and is known to have become Campbell property the year before Bannockburn, to become MacDougall property again in the Sixteenth Century. The MacLeans of Duart also possessed it for a while and as they were known as the dogs their tenure provides another theory about its name. It's probably of prehistoric origin and has been cleverly built into a natural rock outcrop with later modifications including possibly the installation of a chimney, an item only found only in the grandest of Scottish homes until quite recently. Nearby is a lovely sheltered bay, ideal for beaching boats. Sadly none of this counts with the planners. 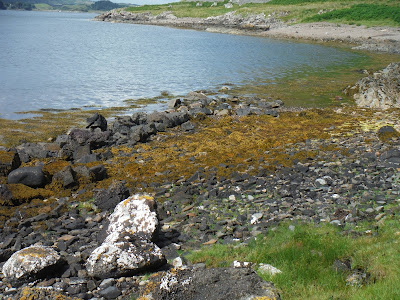 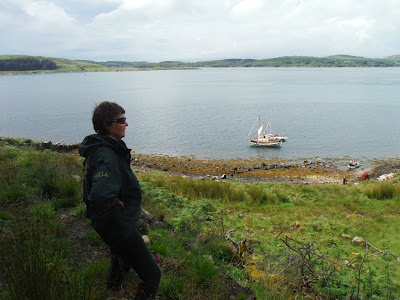 We climbed the steep hill behind the Port, harder work by far than our earlier rowing, to admire the views out West to Colonsay and North to the Sound of Mull. From our vantage point we spotted the beautiful Fife yacht Kentra, visiting the West coast for her ninetieth birthday cruise. 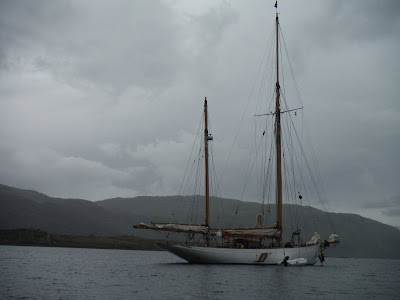 Finally we scrambled and slid back down to sea level in heavy rain squalls for a brisk row up the Sound, to give the Selkie a good scrub and leave her on her pontoon in time for the club’s evening row.

In summary we rowed for over thirty miles in total, dined well and remained friends throughout, altogether a great way to spend a Summer weekend and a clear demonstration after the excitement of the Worlds that our skiffs are not confined to racing.

The charts in this post are used courtesy of Antares Charts, a great co-operative operation that is great value and really worth supporting.