On a point near an abandoned croft, the history of the ordinary folk is unwritten. 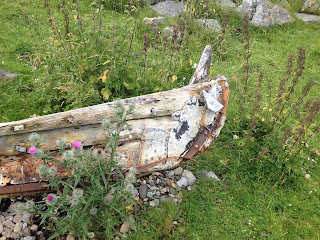 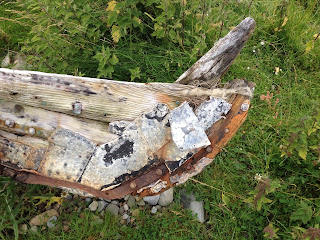 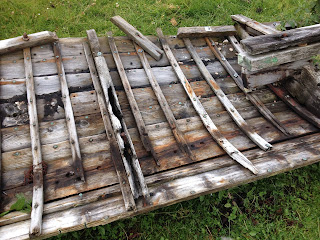 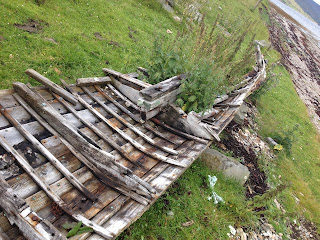 Posted by Ewan at 23:29 No comments: Links to this post


There's a little video of our trip back on www.youtube.com now!
Posted by Ewan at 01:06 No comments: Links to this post

For the fourteenth year the muster people duly assembled for a weekend of serious sailing, eating and culture. It's not every small island that can host a proper ceilidh with turns that included a Telemann flute concerto, but Luing is special that way. 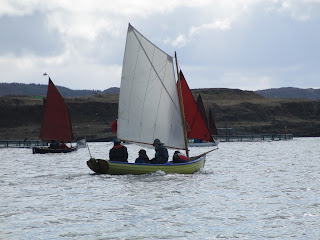 This year the sun shone and a steady wind blew, ideal conditions for the fleet of little boats to reach South down to one of our favourite bays a mile or so North of the Dorus Mor. On the yellow Kelpie I shipped along an illustrious crew, the guru from Bernisdale himself handling the jib, Judie and Phoenix on the bailers. After lunch the wind freshened and we had a fast circumnavigation of Shuna back to base, to unwind a bit before the festivities. Sunday was more of the same, with Clare and Tina working the ship, a picnic on Eilean Gamhna and a really hard beat back home, as the weather was returning to the usual West coast pattern. As usual the weekend finished with some intellectual stimulation in the form of diverse lectures on coracle building, open boat sailing, chaos theory and such like topics.

The change in the weather had been predicted, so the ship was left ashore and recovered on the Friday. Buses are few in Argyll, but friendly neighbours aplenty. There was a funeral at Kilbrandon and our kindly minister gave me a lift to the graveyard, from where it was only half an hour's brisk walk to the ferry. (The old kirk contains some of the finest stained glass windows in Scotland, by the wonderful Douglas Strachan.)

It didn't take a lot to persuade Richard Pierce to join me for the sail across and the voyage back. It was the best sail of the year so far, sparkling seas and a steady wind giving us a reach across. A couple of hours later the wind had veered a bit and Richard had another reach back, covering the seven miles in about an hour and a quarter in his flying machine.

Posted by Ewan at 10:44 No comments: Links to this post

Return to the Sea (and blogging) 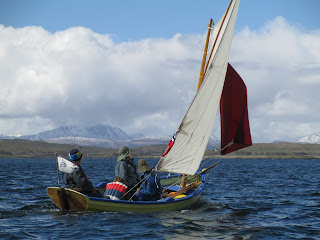 The last couple of years have been extremely busy for me, as I have been involved in establishing a fine art gallery in Glasgow, see www.leiperfineart.com As a result I've hardly been sailing and have had little time for blogging.

Both of my yachts, Stroma and Juni, are for sail, through www.woodenships.co.uk , which doesn't mean the end of yachting for me, but a change of course. It's forty years since I became the guardian of Stroma and I no longer have the strength or the nerve to get the most out of her. Juni is an absolute delight, a mahogany gem on the water. Now that she's restored to a reasonable condition I feel that I have done my duty by her and hope that she'll find her way to a peaceful mooring at the foot of someone's garden in a nice part of the World.

The old adage was a foot (waterline) for each year of age, but that probably always was complete rubbish and certainly is now in our austere age when virtually nobody sails with a paid crew. In my view it makes good sense to reduce the size of the boat to keep it manageable.  I marvel at the faith of elderly folk in the use of hydraulics to weigh anchor and electric winches to get in massive genoas. I'd far rather sacrifice a little comfort and speed by keeping the ship small enough to work safely without such things and mainly single-handed, as most of my sailing is destined to be solitary.

I've been checking out Francois Vivier's Beniguet , which looks just about right for the purpose. Any comments would be appreciated.

Meanwhile Scottish Coastal Rowing continues to spread. I've mainly been rowing with the Isle of Seil's Selkie but I'm now getting involved in the new Glasgow Coastal Rowing Club, which currently hasn't a website, but can be found on Facebook.

And the lovely historic Isle of Luing continues to exert its pull. Last weekend a couple of dozen small skiffs, wherries and similar classic shapes were to be seen thrashing about in a stiff breeze in the wonderful stretch of water North of Crinan. the photograph at the top of this post shows my Kelpie charging along on a reach with self at the helm, Iain Oughtred forward and Judy and Phoenix bailing, the old Ensign of Scotland on the sail and the Toberonochy Dolphin flying at the stern.

photo courtesy of Mark Robertson
Posted by Ewan at 14:33 No comments: Links to this post