The Scottie, a story of espionage in sport

In 1998 I was hiding from the football World Cup, which was gripping the city and making work impossible. I decided to do a little research into one of Scotland's most successful yacht designers, Alfred Mylne. The following article resulted and had some interesting consequences.

My Article about Scottie

In the Glasgow City Archives one can find the plans of a lovely German yacht. Everything is there, the line drawing, general arrangements, sail plan and construction details. There are even drawings for individual wooden and metal parts and fittings. All you would need to build her would be a renewal of the permission from German Lloyds, because the original permit from February 1906 was only valid for nine years.

In the Summer of 1905 the young ship designer Alfred Mylne received a commission, in conditions of the utmost secrecy, to build a racing yacht to the old German/Danish 7 metre rule. Mylne had served his time with the legendary G L Watson, where he had been involved in the design of the  Britannia for the Prince of Wales, and in 1905 he had been established on his own for about ten years. During this time he had designed many successful racing yachts, mostly built on the Firth of Clyde, where he was enjoying a growing popularity. The commission of 1905 was his first design for a seven metre yacht, a very specialised type of racer.

The early years of the last century were a hotbed for espionage of all sorts and yacht-building was no exception. Alfred Mylne got his client Edmund Nordheim to measure the existing German yachts secretly and send him their dimensions. On 6 September 1905 Nordheim wrote to him as follows "Please find enclosed various measurements of the available modern German racers......" having visited the yards where about a dozen of these were laid up.

Mylne's plans are masterworks of technical drawing. He has taken the greatest care with all the details and left nothing to chance. All measurements have been carefully given in feet, inches and fractions of an inch to correspond to the metric dimensions of the Rule. The new boat was built by Robertsons at Sandbank and the sails made by John McKenzie in Greenock. She was very elegant and slim, with little room below and no concessions made for comfort over speed.

The new ship was called Scottie and emerged onto the Baltic regatta scene in 1906. In her first couple of seasons she won 41 races.

I ended my original piece by writing "it would be interesting to know the fate of Scottie after 1907 and if after ninety years she still exists." 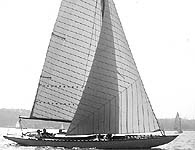 Her present owner Hans Heckmann then wrote that he had found the yacht in Berlin in 1945, then called Seagull, on the hard-standing at the Berlin Yacht Club, high and dry on a pile of bricks surrounded by total destruction. She was a bare hull without mast or sails, but still equipped with her British Admiralty pattern anchor and wrought iron tiller. He had bought the wreck for 500 Marks and completely rebuilt her over several years. He had called her Illusion and only later learned her name had been Scottie, when he came across some old sailing magazines from 1907. 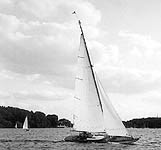 Scottie now has state of the art racing sails and still wins races on the Berlin lakes. Her young crew is made up of the third generation of the Heckmann family.

Party on the Wannsee

In the Spring of 2005 I had a letter from Hans Heckmann  inviting me to the one hundredth birthday party of the Scottie, now renamed Illusion (actually as you will see from the above, 2005 was the centenary of the commission, rather than the launch). An enormous mobile Glockenspiel was going to come down from Rostock and he wanted some Scottish music for it to play. The party was to take place about midsummer on the Wannsee Lake at Berlin. Of course I couldn't refuse and when Glasgow's Provost Liz Cameron heard about the trip she supplied me with a special greeting message to the city of Berlin, but didn't offer to pay for my ticket.

The party took place in fantastic sunny weather, which Germans call Kaiserwetter.  The good ship Illusion set sail from the clubhouse of the Akademischer Segler-Verein with a cheery group on board and we drifted in a light breeze along the Wannsee to the Berlin Yacht Club, drinking champagne and listening to old German music hall songs on a wind-up gramophone. On our arrival we were treated to more champagne, tunes (but, strangely, not Scottish ones) rang out on the Glockenspiel and speeches were delivered. The day ended with dancing to a jazz band on the terrace in front of the clubhouse.

I wasn't able to understand everything that went on, partly because of my limited ability in German, but mainly because of the amount of drink on offer. It astonished me that the BYC members felt it necessary to keep their neat black blazers and club ties on, despite it being a sweltering day. My own style was a little less formal and I was given a club burgee to wear. 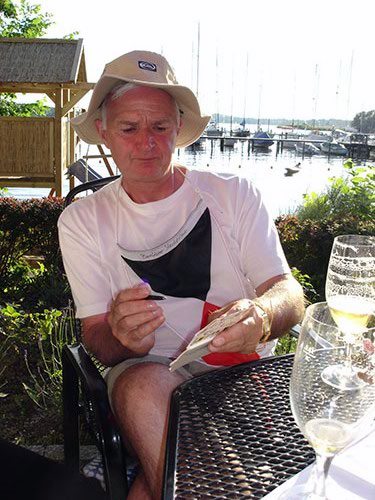 When writing this piece I came across a recent picture of Illusion with a rather nice crew, taken by the brilliant Berlin photographer Soenke Hucho. You will see that they still have music on board. 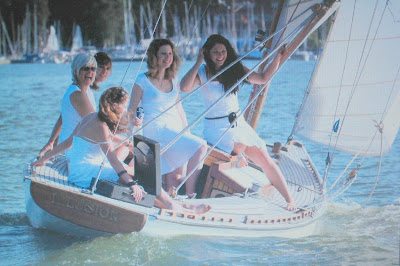