Another Chapter closed at Ardmaddy, but the Book's not written yet! 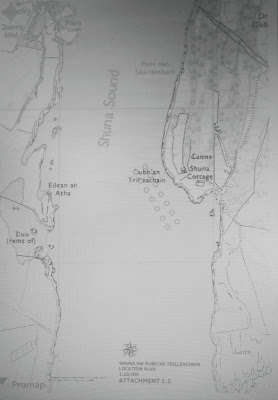 Read to the end to see the significance of this picture

This week there was a good chance to see democracy in action, Argyll style, at the Corran Halls when the PPSL Committee met to decide the controversial application for a 600,000 capacity fish farm in Seil Sound.

The application had attracted about 800 objections, of which over 100 came from residents of Seil, Easdale and Luing, representing about a  quarter of the adult population. A further 140 or so came from mid-Argyll, another 125 from the rest of Scotland and about 350 from the rest of the United Kingdom, many of them holiday visitors, and 65 came from abroad. There were also 44 letters in support, of which one was from a local resident.

Those who have been following this saga will know that some years ago Ardmaddy was selected as a “pilot relocation project” by the Scottish Government to receive a transfer of the total production from a site in Loch Riddon, which had been polluting to such an extent that much of the wildlife there had become extinct. As a result the site at Ardmaddy had its capacity increased from 800 tonnes (200,000 fish) to 1300 tonnes (325,000 fish) but it was soon found that the natural capacity of the environment could not cope, as the strong tidal streams round the top of Seil Sound were carrying away huge quantities of fish waste, toxic chemicals and pesticides with some ending up in the nearby Firth of Lorn, which enjoys special protection under the European Habitats Directive.

Faced with having to relocate the operating company decided not only to move further South down the Sound but to apply for an increase of permitted biomass at the same time, to a total of 2,500 tonnes. Representing 600,000 mature salmon, this is the maximum that can currently be licensed for any farm in Scotland.

As consultees the Argyll Fisheries Board argued that it would be better to relocate without simultaneously increasing the biomass, to discover if the new site was truly better than the existing one. This would seem to be the prudent scientific way to do things, but wasn’t to be.

Although the major problems with large scale industrial fish farms are to do with pollution and waste disposal it seems that Argyll & Bute Council has convinced itself that such matters have nothing to do with the planning process. Astonishingly (and perhaps to the surprise of the applicants) the Council decided it was unnecessary to require an Environmental Impact Assessment.

Accordingly the issue came down to one of jobs – preserving employment in the operating company and its suppliers versus the threat perceived by the local residents, and expressed in their strong objections, to their own jobs in tourism and leisure based businesses. Here we saw some instances of local democracy at its very worst.

A supporter of the application claimed that unlike fish farming, tourism employs mainly “folk from Eastern Europe”. Underlying some councillors’ remarks seemed to be a feeling that jobs in tourism don’t count. There used to be a feeling that it was somehow demeaning to work in a service industry rather than to do “real work” such as in agriculture and fisheries and one would have hoped that such days were long gone.

Councillor Devon let slip her feelings in asking for figures about “your tourism” as if the industry is a trivial local thing: one would have thought that a politician would know that the sector is bigger by far than any other outside the public sector, generating, according to Scottish Government figures 130 times more revenue than aquaculture does.

Councillor Currie spoke strongly in support of the application, despite knowing that his home community of Islay had protected their jobs by seeing off efforts by a fish farm company to establish a similar operation there (746 locals plus 102 visitors signed the petition against).  Perhaps he’s hoping that the people back home don’t get to hear how he voted.

At the end of the day not one of the committee found any merit whatsoever in the points put forward on behalf of the residents of Seil and the application was granted unanimously.

This closes a chapter in the story of fish farming around Seil, but the book isn’t written yet. This week also saw an application going in to SEPA for yet another 2,500 tonne installation in a proposed new site off the bay at the South west corner of the Isle of Shuna.

The image at the top is the plan of the proposed new farm off Shuna. It's vital that anyone who wants to continue being able to sail in Argyll gets involved in stopping this madness.

Please watch for progress on http://www.saveseilsound.org.uk/wordpress
Posted by Ewan at 00:06 No comments: