I admit that in the past I've suffered from it myself in the past, but I'm pleased to report that I'm nearly cured. I mean of course speculating about what is or is not a classic boat.
Every now and again a thread is started on a forum somewhere and the old craving to take part nags away, like the reformed nicotinic's inner compulsion to light up. Currently one is running on Classic Boat here and I'm trying to resist.
Matters aren't helped very much by the availability of magazines with names like Classic Boat, organisations like the Freundeskreis Klassiche Yachten and the British Classic Yacht Club and at this time of year events all over the place with that word in their name. Dammit, next week Stroma and I are off to the Crinan Classics.
Many years ago, before I was cured, I was involved a bit in the nascent European Classic Yacht Union and travelled great distances for meetings, where defining a classic became a major topic for debate. I became convinced that everyone regards his or her own ship, or the one he or she aspires to own, as a classic. Consciously or not we try to broaden the category to suit our subjective taste and exclude ships we simply don't like, or those made from materials we don't like.
My late friend, sometime mentor and gentle eccentric David Ryder-Turner provided a thoughtful piece on the subject for the Freundeskreis, which can be read here. He may have intended it to be the last word on the subject, but predictably it started yet another thread running. David was a Fife addict with a love of long overhangs and it shows in his article, despite his obvious struggle to be fair and objective.
British Classic Yacht Club also share the enthusiasm for long overhangs and it's easy to overlook that they were regarded as ugly when they arrived on the scene. They're not all that practical either, as they usually don't achieve their intended aim of extending by very much the immersed length of the hull. Personally I find some of the state-of-the-art racing machines attractive as having genuine functional beauty.
It's a lot easier to say what isn't relevant to being classic. Authenticity certainly hasn't got anything to do with it, because surely an incredible design from the past could be regarded as classic even if the actual ship didn't exist any more.  Whether a particular object is original, a rebuild, a restoration or a replica is only really of interest to those who regard these objects, like Barnato's Bentley, as investments rather than  aesthetically.
Easiest of all is just not to get involved in the discussion and to spend one's time doing something useful. I'm off to put some varnish on the toerails and if that doesn't work it'll have to be therapy.
Posted by Ewan at 02:47 No comments: Links to this post

Today sees the opening of Glasgow's new Transport Museum, housed in an utterly astonishing building designed by Zaha Hadid and built right in the heart of where ship-building on the upper Clyde started. It's more or less where Messrs D & W Henderson constructed gigantic racing yachts to designs of George Lennox Watson for characters such as Kaiser Bill and his uncle and sparring partner the Prince of Wales, about which I've already written here.
In common with many other Glaswegians I was introduced to the ship-models at Kelvingrove as a child and they soon became a weekend pilgrimage. I suffered real withdrawal symptoms when most of them later went into storage, there being insufficient space in the old transport museum. From the elegant creations of Watson and the Fifes to the battleships and liners of John Brown's they were an inspiring demonstration of the range of design and building skills to be found in and around the city in its industrial incarnation. It will be good to meet these old friends again, once the opening crowds have died down a bit.
The building is a huge shiny organic thing that snakes about on the banks of the river, perhaps like a metamorphosis of a few industrial sheds that have fused and twisted themselves together under some cosmic influence. It provides a perfect setting for the city's tall ship, the Glenlee, which together with the Waverley is virtually the last of our heritage still floating.

Like virtually all of Glasgow's municipal attractions the new museum is free. If there were no other this would be a good reason to visit the city. Details of the museum can be found here.
Posted by Ewan at 02:49 No comments: Links to this post 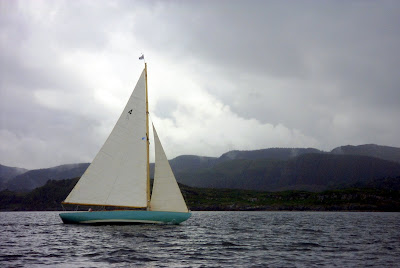 In July 1978 Peter and I were at the end of a wet fortnight aboard Stroma, much of which had been spent storm-bound in Mallaig. We had finally left and drifted South, more with the tide than the wind, in a dreich grey day of the sort that makes you wonder why you ever took up sailing. The intention was that if the weather picked up we would sail back to our mooring in Oban via the outside of Mull, such is the optimism of the young. In the event progress was so slow that by early afternoon we were only at the South end of Eigg. As the tide would now set against us it was an easy decision to stop there and spend the rest of the day trying to catch our supper.

We anchored in about two fathoms inside the island that protects the bay. Our efforts at fishing were just as pathetic as our day's sail had been. The fish that swam about under our keel were so small that they had no difficulty in nibbling the bait from our hooks without any risk to themselves. After a walk ashore, when we discovered that at that time there seemed to be no facilities whatsoever on Eigg we turned in for an early night.

At about five in the morning I was woken by Stroma rolling on an Atlantic swell which seemed to be setting in. I took a look out and noticed that there had been a definite change in the weather. We now had a very clear dry summer morning and there was a breeze. By this time Peter was also awake and after some discussion he agreed to assist with getting the anchor and setting sail, provided he could  then return to his bunk to complete his night's repose.

Thus at about 5.45 am Stroma was underway. We slipped out Southwards from the bay and were soon on a close reach in a sparkling fresh Northwesterly breeze. I was pleased that I was alone in the cockpit and could treat the beautiful morning as my very own. Actually I was sharing it with various seabirds and the occasional fishing boat could be spotted far off when we rose on the swell.

The Islanders are wonderful boats on a reach, when you really feel the power of the mainsail. Soon Coll started to appear on the horizon and then we were in flatter water as we sailed down the East side of the island to Arinagour.

If you are engineless it is always better to pick a safe spot to anchor where you won't require to get underway during the night. I was glad that Peter was now awake as we had some tight tacking to get into the chosen spot some distance from the steamer pier. By nine thirty we were anchored and ready to spend the rest of a lovely summer day ashore.
After a third of a century Peter is still willing to come sailing with me, but now his son Ken also comes along. You can read about more of our excursions here and here