Has anyone seen Karita? 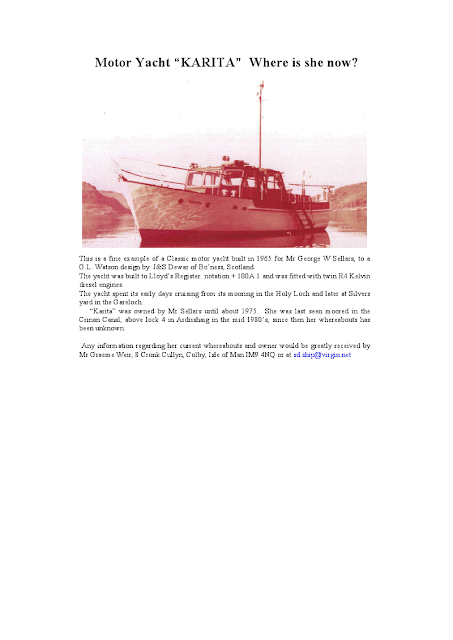 Tore Herlin and the Juni boats 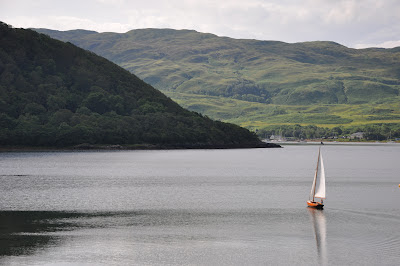 Tore Herlin is not as well known in this country as two of his creations, the tall ships Gladan and Falken. While chief architect to the Swedish Navy he enjoyed a parallel career as a designer of yachts and small boats inspired in large part by his wish to encourage sail training at all levels. The little yacht Juni, which I found in Stockholm in 2005 and brought back for restoration, is a "Pojkbat" or young persons boat intended for this purpose.

The original Juni was built about 1935 and resembled the Swedish Starboat, a design that was adopted here with the addition of a counter for the Loch Long. She proved to be very fast and seaworthy for her size with the result that numerous copies followed, some in carvel mahogany and some clinker planked in oak. They were taken up by boat-building schools as a conveniently small project, so that the design was used to teach building skills, resulting in a boat which teaches sailing. My Juni was built in 1973 to the order of Sonja Herlin, Tore's daughter, to replace the original boat after she was destroyed in a fire.

I didn't know all this when I first saw Juni looking rather dejected in a garden in Dalaro. It was obvious that she needed a lot of work, but the quality of her original build shone through, crying out for restoration.

The story of her return to Scotland is one of the first posts on this blog and can be read here An Expedition to Stockholm. Only once she was safely here in Argyll was it possible to remove the furniture and floorboards to get a proper look at what needed to be done. This also gave me a proper understanding of the quality of the work done by the Storrebro School. The hull is of close-seam construction, that is to say there is no caulking or stopping between the planks. She has swept decks in teak, also a masterwork in small scale. Varnished mahogany topsides meant that any mistakes would be highly visible. The project was going to be more challenging than one on a larger scale.

I won't bore the reader with all the details of what was done. The topsides, spars and internal furniture were all stripped down, to be refinished with oil and traditional varnish, the work producing plenty of thinking time. The difficult work involved dealing with two major structural cracks in the hull planking, combined with numerous associated broken frames. I was a bit worried in case this damage had occurred through normal sailing but it seemed more likely to have happened on shore, as Swedish clubs usually operate their own storage facilities and accidents do happen. Subsequently some discreet enquiries suggested that this was probably the cause, which was reassuring.

Juni was relaunched in June 2012 and there followed a couple of weeks of anxious pumping while she took up after about ten years ashore. She has proved to be a lively little seaboat, behaving in some ways like a much larger yacht but also very fast and responsive. She'll be ideal for day-sailing around the sheltered sea-lochs of mid-Argyll. 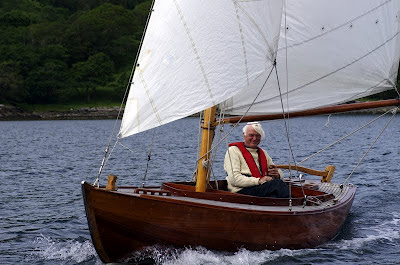