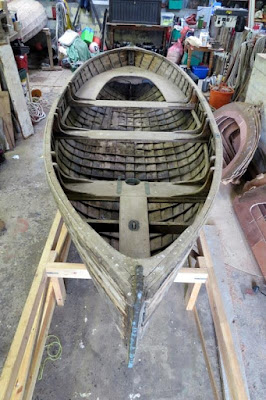 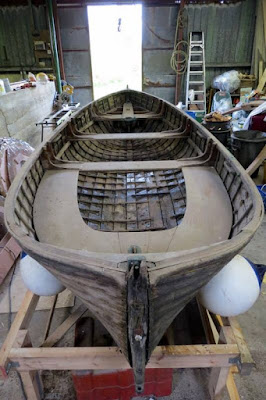 I'm posting some photos taken by my friend John MacLean of Iona, of a lovely little sailing skiff that he rescued from certain destruction about sixteen years ago. He is anxious to trace her provenance and to learn about her history. I'm hoping that this post can set off a trail of detection among enthusiasts for our great Scottish designers and yards.

Right now, all the John knows about his skiff is that he thinks she was built in 1910 and before he found her at Crinan she had apparently been lying for many years beside a loch at Scammadale, up the road from me. There are several fishing lochs up there, miles from main roads, and one can imagine it being too much trouble for the estate owners to look after this lovely little work of art. It must have taken many years of total neglect to reduce a wonderful example of fine craftsmanship to her present pitiful state. It's a sad reflection that someone considered a craft obviously built for occasional sailing in salt water suitable for a fresh water fishing loch. 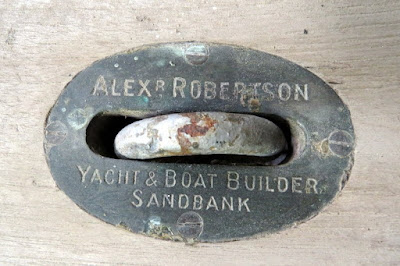 The builder's plate looks pretty authentic and ties in with our  knowledge that Robertsons built lots of tenders and small craft, along with some pretty spectacular larger racing yachts and steam yachts. It doesn't help to confirm the date though, as although Alexander Robertson brought his sons into the business he didn't set up Alex Robertson & Sons Limited until August 1922.

In the middle of the plate is the top of the lifting ring, which pulls up to allow insertion of a hook, one at each end to hoist the boat aboard her mother ship after, we hope, a happy trip around the bay under an unstayed lug sail set in that mast partner braced to the forward thwart.

It's possible  that this wee treasure was built for one of the magnificent steam yachts that Robertson was building. But from the excellent Robertsons Wiki Entry, which was largely written by David Hutchison, a member of the family, it seems that yard didn't launch anything of this type in 1910. Candidates around that date could be Alfred Mylne's 60 foot Galma of 1909, or J A McCallums 65.2 foot Aroha (also Adana) of 1914. Yards wouldn't normally farm out the small craft, but if one of them had done Robertsons would have been a good choice. Towards the First World War Robertson was building mainly for the Admiralty and I doubt they would have required a lovely sailing tender.

If we assume that the neighbour would be a West coast yard we are looking at the McGruers of Clynder and William Fife III of Fairlie. 1910 rules out the McGruers, as it seems that they were just getting going then and didn't build larger yachts until later. May Fife McCallum's book Fast and Bonnie has a comprehensive list of Fife yachts, but 1910 seems again a fallow year for large steam yachts. The only candidate is the 83 ton Shaheen, built for a London owner, not very likely.

Two other possibilities occur to me.

Firstly, it's possible that one of the shipyards, such as Connel & Co, might have been building a steam yacht and commissioned Robertsons to produce a very special sailing tender. Directors of those yards did undertake these projects, often for themselves, but usually when work in the yard was slack.

Secondly, our pet might have been ordered by James Rennie Barnet of G L Watson & Co Limited to go with one of the magnificent steam yachts he was designing. He had a special interest in small sailing boats, having been an enthusiast for canoe cruising of the Rob Roy MacGregor type in his youth. You can read about one of his trips on the Forth Yacht Clubs Association website here: Cruise of the Kelpie

So, it's over to you, dear readers, to come up with some ideas!