The smallest Gallery in the World, a very small Island and an Abundance of Progue 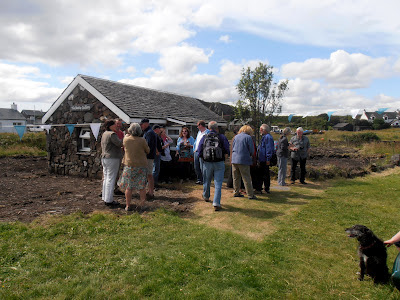 Today Easdale Island with its strange scenery and lovely wee cottages is a haven for artists and craftspeople and it's where the enterprising picture-framer Jan Fraser has just opened The Bothy, which may qualify for the title of the smallest art gallery in the world. Nephews Paul and Adam were among various well-known artists represented at the first show.
Prints of the above and many more are available from The Bothy. 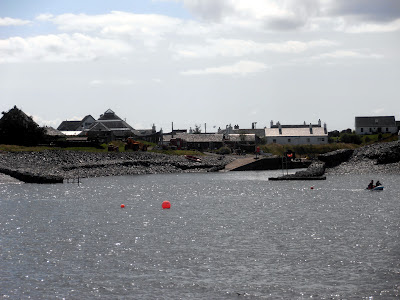 Easdale is so tiny that Hamish Haswell-Smith doesn't really rate it as an island, describing it in his book as a "broken-off outlier" from Seil, which in turn he doesn't see as a proper island, since the old ferry at the Tigh-an Truish inn was replaced by a bridge 220 years ago. As everyone probably knows already the inn got its name, which translates as "The House of the Trousers", because after the second Jacobite rising wearing the kilt became illegal, so islanders would stop there to borrow a pair of trousers for their visit to the mainland.

Easdale is smaller today than it was originally, as for several centuries it was populated by squads of diligent miners who blasted and chopped huge holes, hundreds of feet deep, bringing out millions of tons of slate that at one time roofed the World. 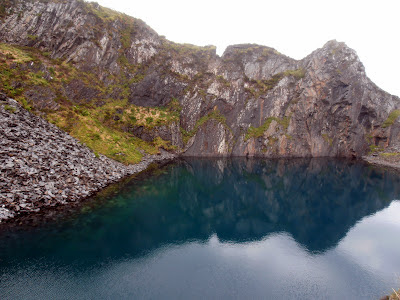 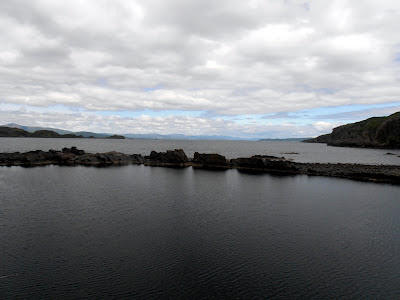 At its peak there were about five hundred residents on Easdale alone, with many more on the neighbouring islands. It's hard to imagine what life must have been like in these places, particularly on tiny outcrops like Belnahua, where bad weather could cut the workers off for months in winter. They lived in  slate cottages built by themselves and grew their own vegetables in miniature walled gardens, the very earth created by the workers by harvesting seaweed, bracken and dung, identifiable today from the lush weeds that flourish on what's left. 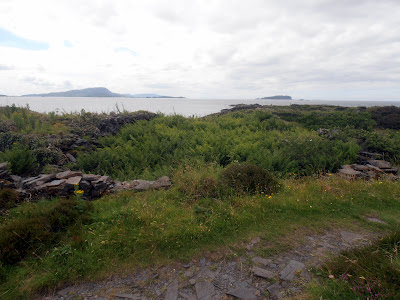 In such a slatey, tree-less environment it must have been seen as a gift from the gods when the sailing ship Norval, laden with a cargo of Canadian timber struck rocks on nearby uninhabited Insch Island in thick fog on the shortest day, 20 December 1870. A few weeks earlier she had left Montreal bound for Glasgow and would have been heading for the Mull of Kintyre, about thirty miles South of where she struck. Captain Taylor would have known from soundings and the fog that he was near land and may have been trying to give Ireland a wide berth. The entire crew got safely off and rowed the short distance to Easdale. Two days later the owner, Walter Grieve of Greenock, sent the steam tug Flying Meteor to attempt a rescue, but the Norval was found to be badly holed on a rock and on 5 January 1871 she broke up.
I've written before about the ancient art of The Progue. We can assume that the Lorn proguers were out in force as thousands of deal boards floated North past Oban and into the Sound of Mull, while Grieve's men tried to salvage as much as they could. By February the Glasgow Herald was carrying advertisements for the contract to transport the salvage to Glasgow for auction.
Walter Grieve was one of a family of diligent Scots, from Perthshire originally, who established themselves around 1837 in the cod fishery in St Johns, Newfoundland, then moved from 1855 into sealing and whaling. He commissioned numerous ships, the Norval being a large three-master being built by A McMillan & Sons at Dumbarton, on the site latterly occupied by the distillery, in 1864. His brother James Johnston Grieve was the resident partner at Greenock. He was prominent in promoting the development of the harbour and various public works in the town, was Provost four times and represented the town in Parliament from 1868 to 1877. In common with most incomers he found that his efforts weren't entirely welcomed in some quarters, but the effects remain and Grieve Road is named after him.
These mid-Victorian Scots were an astonishingly resilient, enterprising tribe of risk-takers as one can see from Walter Grieve's quick response to the wreck. Later his family suffered a financial ship-wreck as the records show that they were all sequestrated at Greenock Sheriff Court in 1895. Incredibly for the times they clawed their way out of bankruptcy in little over two years.
Back to our story, on Easdale the islanders seized the chance to acquire the main mast of the Norval, together with sufficient timber to construct a new hall for the training of the local militia. For the same purpose part of the old harbour was filled in with quarry waste to create a level drill field, the present-day village green.  .
Ten years after the wreck a storm burst through the thin curtain walls and the quarries flooded, drowning the machinery. The men survived but their livelihood was largely gone. Industry limped on with slate being chopped out of the accessible areas until the 1950s. By 1961 the population was down to 16, but it has gradually recovered and today stands at about 60, with many of the cottages also in use as holiday homes. The story can be found on www.easdale.org.
Today visiting Easdale, accessed by a two minute ride on a little ferry crewed by a three-legged dog, is a unique experience. Apart from the artists the island now has its own local history museum, the Puffer pub and restaurant and numerous curious relics of our industrial past. The old proguing habit survives too, as the recycled telephone box shows. 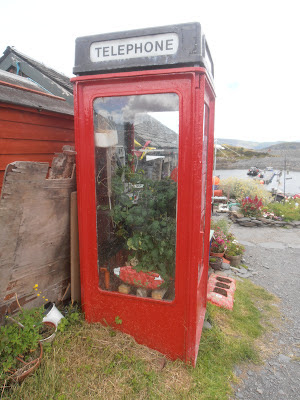