Gylen Castle from the sea 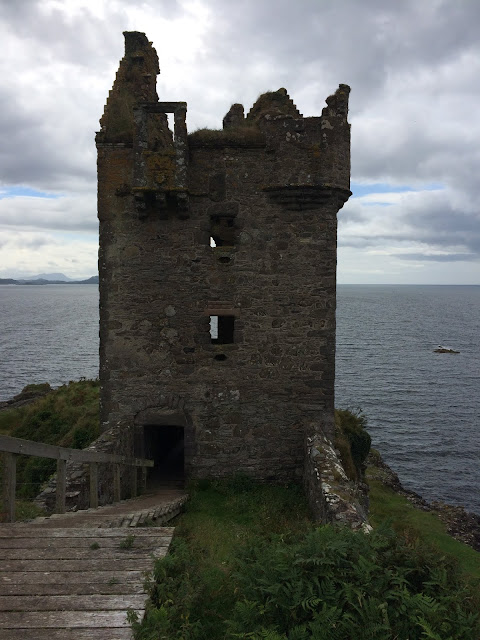 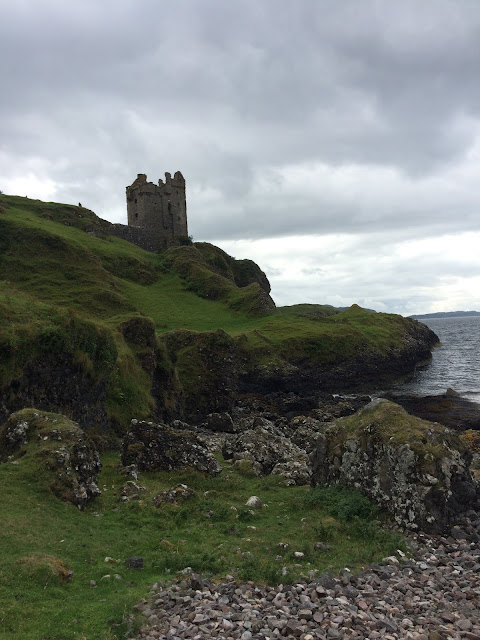 Gylen Castle stands guard at the South end of Kerrera, a former MacDougall stronghold built in 1582 and occupied until the inhabitants were besieged by General Leslie in 1647, Deprived of water, they surrendered on the faith of Leslie's promise to spare them, on which of course he promptly reneged, allowing only one young MacDougall boy to survive.

I've written before about my acquisition of the sailing vessel Gaudeamus, here; The Crinan Canal not quite for me. I eventually made it through the canal in 1974 and moored my ship at the Brandystone in Oban Bay, thanks to the wonderful Donnie Currie, then one of our last surviving boatbuilders. Our old friend Donald Brown soon heard of the move and demanded that I take him to see Gylen Castle from the sea.

Mr Brown was not a man whose demands you could easily refuse. Born and brought up in the family farm at the head of Loch Feochan he had walked daily the five miles to school in Oban. Standing well over six feet he was a commanding presence, also a loud one, as his wartime service as a front line doctor had left him quite deaf. A man of principle, as a medical student he had refused to take part in University boxing. Like many from Argyll he had cousins everywhere, John Stevenson the procurator fiscal and the inspiration for Sutherland's Law, in which he was played by Iain Cuthbertson and Jimmy Macdonald the Oban undertaker being two of them. Jimmy's hearse proved useful when Donald bought a grandfather clock in Oban, but started rumours when it was seen parked outside his house in Glasgow.

We had arranged to meet at the boat, the Browns being already in Oban. On the appointed day I left Glasgow early, but my car developed problems on the way and on arrival I had to leave it in a garage. This was fortunate as by the end of the day I was to be in no fit state to drive.

At the Brandystone I was met by Donald in full white surgical dress, which he assured me being bloodproof was also waterproof, his wife Barbara in more normal clothing and their golden labrador, Juno. The Browns were namely for matrimonial discussions, both being of wonderfully strong character. Donald felt that wife and dog should stay ashore, Barbara disagreed and had Juno had a vote she would have been with Donald. Barbara of course won and we duly made a somewhat risky trip out in the eight foot pram dinghy to my ship.

Gaudeamus is a Loch Long, number 98 in the class, twentyone feet overall and with minimal shelter. here's a picture of a sistership.

We were quickly underway in quite a brisk following breeze. From the outset Juno was distinctly unhappy and cowered under the wee cuddy that you'll see in the photograph. Donald took the helm, while Barbara held on tightly and I did my best to keep calm. We were soon past Horsehoe Bay, avoided the Cutter Rock and made a swift turn to starboard at the bottom of Kerrera Sound. 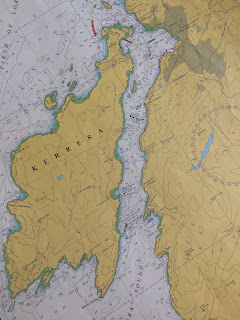 There followed a nice fast reach in a flat sea under the lea of the island, with a wonderful clear view of the castle, before clearing the coast for the trip back North.

Loch Longs are tough wee boats and I had no doubt that we would make it, but they're not comfortable in a blow with the nasty short waves that we get when there's a good strong tide running. It took several tacks to work our way back to the entrance to the bay, after which we had a run down to the Brandystone. As we picked up the mooring Juno saw her chance to jump into the water, swim ashore and make off.

Once all stowed, dinghy back in Donnie's shed and  Juno recovered, Donald drove us to the summit of one of Oban's peaks, where we were met by the above mentioned John and Jimmie. They said they had been concerned about us and greatly relieved when they saw the Gaudeamus coming round into the bay and flying down to her mooring. Once we were seated we were each handed a pint glass of whisky topped up with strong ale to fortify us for the trip back to Glasgow in Donald's Rover.