Argyll Kayak Trail _ With THIS in the middle of it? We don't think so!

For a couple of years a growing group of us, residents of mid-Argyll in a completely lovely part of the West coast of Scotland, have been campaigning against the mad expansion of industrial fish farming in the sea lochs.

Our campaign group has established a website www.saveseilsound.org.uk which has all the details.

The image above shows an existing farm operated by Lakeland Marine Farm, who have recently been given permission to increase its size to almost double. They also want to instal a new farm, which will block nearly half the navigable width of the Seil Sound, an utterly historical part of our coast.

The local economy here is extremely fragile. Outside of those employed by the public sector, health workers, teachers, the police and so on, it depends almost entirely on tourism in all its forms.

Many (perhaps most) readers of this blog live outside of the United Kingdom but I'm aware from comments received over the years I've been blogging that many of you have ancestral connections with the area, from which thousands emigrated to all parts of the World. You form a sizeable contingent of our annual visitors, families from the States and Canada returning to their roots, Australians making pilgrimages to Ulva, from where MacQuarrie came, and so on.

Only last year my brother had the honour of piping while the ashes of an American Campbell lady were consigned to the Sound of Shuna.

Things are hotting up now, with a planning application going to a hearing in the next month or two. because of this we've started a new blog, here, http://saveseilsound.org.uk/wordpress/

Click the link to see the relevance of the photograph at the top!
Posted by Ewan at 02:20 No comments: 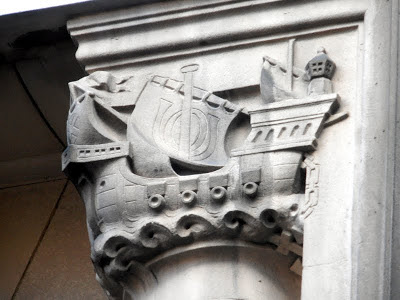 In 1927 the celebrated sculptural artist Archie Dawson, then aged 35 and in his prime, was working on carvings to decorate the front face of the new North British and Mercantile Insurance Building at 200 St Vincent Street, Glasgow

Then as now financial wizards were slippery creatures who didn’t easily part with money and Dawson and his team of assistants were having difficulty getting paid. Artistic pride required the work to be completed, or the reputation of the Dawson atelier would be ruined. It duly was, but a nice revenge was left for future generations to appreciate.

On both faces of the entrance pillar, so you can’t miss it, the mainsail of the castellated fighting ship bears a legend that can be enjoyed to this day.