The evolution of small boat types 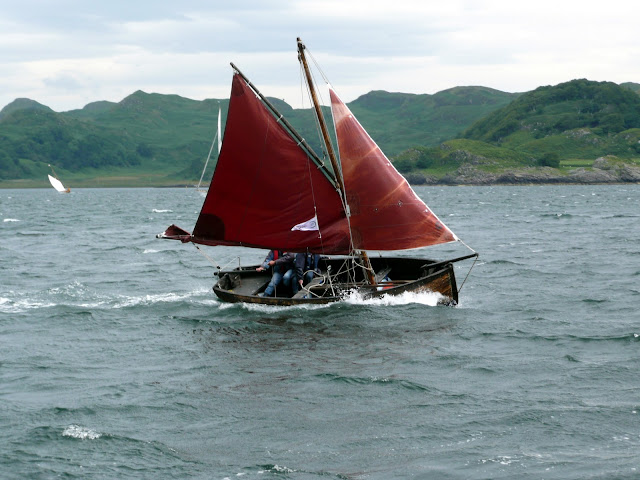 The image above is of Mike and Daphne Murray's gaffer in a half gale off Crinan a couple of years ago. There's nothing to beat the pleasure of driving a seaworthy little boat hard in such conditions.
The last century saw the evolution of small recreational boats from traditional shapes such as this, into the twelve and fourteen foot dinghies of the 1930s, through the boxy shapes that appeared post-war as a result of advances in technology and ending in the production of quite extreme forms that demanded considerable levels of fitness and skill from those who sailed them. 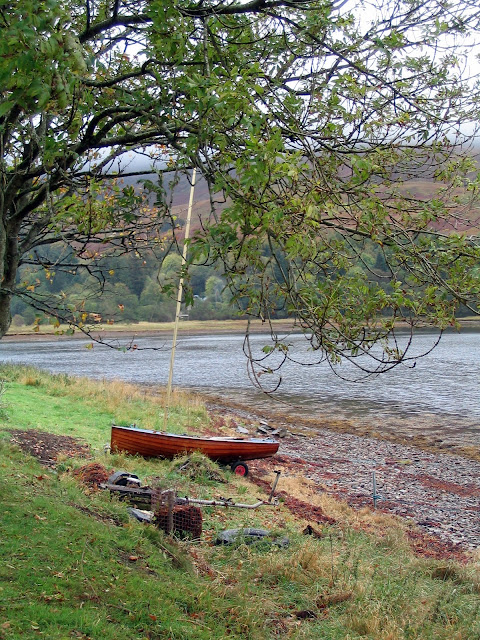 Here is an image of Melody, a classic National Twelve dinghy from 1951, one of Jack Holt's 500 series built by his firm at the Putney Embankment. The construction is absolutely traditional, hardwood clinker planking with copper fastenings. The hull form has moved on a bit, but not too far, from those around twenty or thirty years earlier, which themselves had evolved from the older shapes.  The main changes are the amount of rocker in the keel, intended to make the boat quick to tack, and the flattening of the run aft. These advances had little effect on the fundamental seaworthiness of the design and Melody has a reassuringly well-behaved feel on the water.
Jack Holt was of course instrumental in evolving hull types that made best use of the new glues and plywood. Virtually all of the new classes that emerged in the late 1950s and through the 1960s had the same basic hard chine, occasionally multi-chine shape, made necessary by the method of construction. They were built upside down of plywood panels glued and screwed to stringers, which were in turn set into plywood bulkheads. When fibreglass construction arrived these hull shapes were often retained, although there was no longer any good reason.
Latterly many dinghy classes evolved into highly sophisticated pieces of sporting equipment only suitable for racing. For those who wanted to enjoy purely recreational sailing in small boats the choice seemed pretty limited. If you read only the mainstream boating press you would have felt that the only option was to go for mass-produced plastic sameness.
But almost unnoticed in the media things were beginning to happen on both side of the Atlantic. From its utterly charming and slightly hamespun Volume 1 Number 1 in September 1974 Wooden Boat magazine has grown in status and strength. It has consistently promoted good design and made plans and constructive help available to the builder.
By the 1980s small workshops were hard at work in the UK, from Topher Dawson in Scoraig, to Richard Pierce at Ferry Nab, to a cluster of craftsmen in Essex. By 1986 Iain Oughtred, then based in London, was sufficiently confident to bring out his directory of Wooden Boatbuilding in Britain. While the listed designers and builders showed a great variety of techniques ranging from traditional to high-tech they also showed a common thread, a return to the proven, seaworthy hull shapes of the past. Iain's book was an important factor in getting many of these individuals to feel less isolated and part of a movement. Classic Boat magazine followed along and has made a contribution, although many will not forgive it for gobbling up The Boatman. Watercraft survives and does its best too.
1986 was also the year when I started taking an interest in building boats, rather than sailing them, as I got the space to build myself a small workshop. My first boat was the late Joel White's Nutshell pram, which I absolutely commend to anyone looking for a safe, elegant little tender, or simply a first building project. She still does service and will be the subject of her own post in due course. 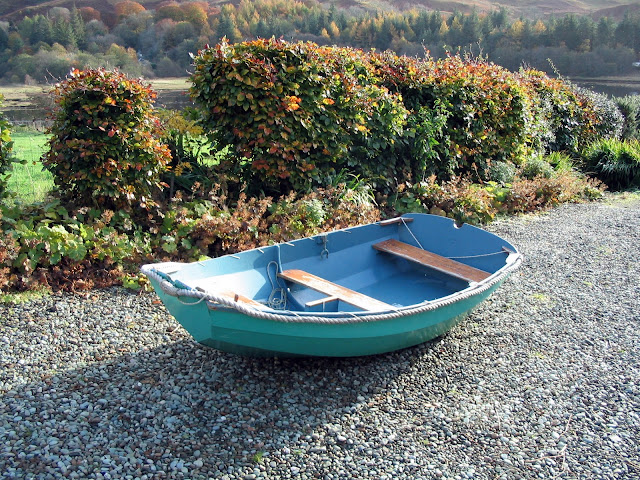 I followed this in 1988 with a Swampscott dory from Volume One of John Gardner's Classic Small Craft. She was an exciting boat to sail with her traditional dory rig. She had little initial stability but once heeled she stiffened up and it was hard to put her rail under. She could have done with a bit more beam, as I found when I bought Volume Two and discovered an improved version.

In 1990 I built John Gardner's Massachusets Quincy skiff, which now resides in semi-retirement beside Loch Awe. She was designed for logging and was wonderful to row, but her flat sides made her unsuitable for work in a seaway.


Then between 1992 and 1994 I built Sonas, which has her own post on this blog and between 1995 and 2003 I rebuilt my Scottish Islander Stroma. Stroma and her sisters have their own blog:- www.scottishislandsclass.blogspot.com

After taking a couple of years off from building to go sailing I built the Kelpie, a Christmas Wherry designed by Walt Simmons of Duck Trap Woodworking, and launched her in 2006. She will also be the subject of her own post in due course. 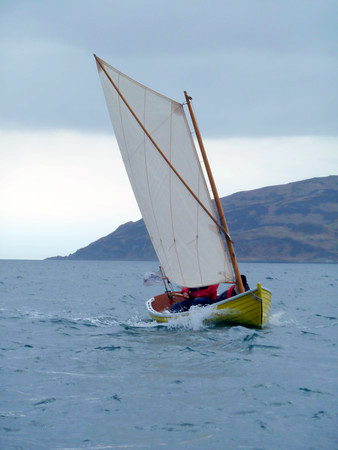 From these projects I have learned that it's quite easy to build a good-looking seaworthy boat without it taking over your life. Advances in gluing technology mean that one does not have to develop traditional wood-working skills either. My boats, other than Sonas, were all built of epoxy-glued plywood upside down over temporary moulds set up on a ladder at a convenient building height. The glued lap produces an extremely strong stringer, so the hulls have needed virtually no framing. Because the moulds can be made from fibre-board or any other cheap material the method should appeal to small-scale professional builders as well as amateurs, in contrast with fibreglass, where there is enormous investment that can only be recouped in mass production.
In recent years there has been almost a craze for small boat musters and raids throughout Europe, where most of the participant boats are built of glued-lap plywood. The Scottish Coastal Rowing Project would not have been achievable using any other method. It will be interesting to watch developments as more people find that building boats can be as much fun as sailing them.
Posted by Ewan at 10:04