In Germany with David Ryder-Turner 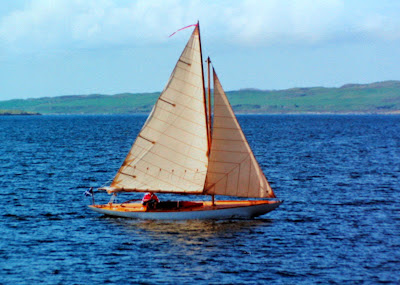 My former career had a few interesting moments, one of which was in the early 1990s when I arrested a ship, an unusual but venerable process invented in the days when a visiting sailing ship might run up bills in a foreign port and forget to pay them. An old friend and mentor who had worked in shipping law for decades without ever getting the chance to do this was extremely envious, and became more so when the case was eventually resolved with a judicial sale by public auction, unheard of in living memory, at least in our jurisdiction. The whole episode involved time spent in the faculty library studying precedents and working out how one should nail the writ to a vessel with no masts. Fortunately all went well and today the ship survives and has acquired some masts. Not so lucky was a racehorse that I arrested a few years later (I got a name for the practice) as someone shot him, but that's a story for a horsey blog rather than a boating one.

My client in the case introduced me to David Ryder-Turner, who lived a few miles away but whom I had never met, which in turn led to David designing me the little yacht Sonas, about which I have already written (Sonas, a Gaelic form of happiness) and whose image is above. She was built over a couple of years under his legendary artistic and very critical eye, ensuring a sweetness in the sheerline that I could never have managed alone.

David had spent time in post-War Hamburg and wanted to revisit some old haunts, so in 1997 I agreed to share the driving and keep him company on the trip. We managed to avoid killing each other and had what David would have described as a very jolly time. This trip and a number of subsequent ones resulted in a number of lasting friendships and in me a great love not just of the Baltic and Northern Germany as places but also German language and culture, studies which had not been encouraged in my childhood.

The landscape is very different from Scotland's, being all flat, well-cultivated and prone to fogs and the sailing entirely different, the Baltic being basically a huge, almost tideless shallow lake, throwing up short steep seas. Despite this I felt an eerie sense of belonging, as if my ancestors had been there before me, and maybe they had been, given the long trading links between Scotland and the Hanseatic towns. The long lost Luebeck Letter was being written about in the Press at that time.

What follows is a photo-essay based on some of these visits.

On our first trip we stopped off at Maldon, where the scene is already much different from the Scottish West coast. Where I sail we have plenty of deep water, if you keep an eye out for reefs and skerries.

On arrival at Laboe we were greeted by the sight of quite a few boats and typical atmospheric conditions. 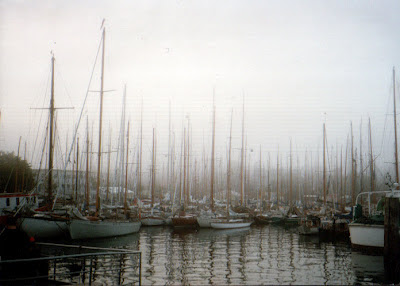 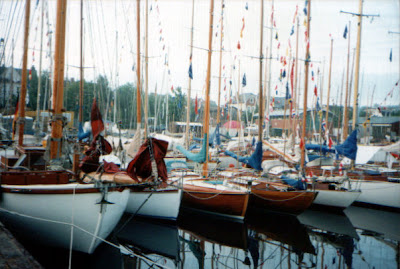 David was attracted to someone nice and blonde on aboard Feolinn. 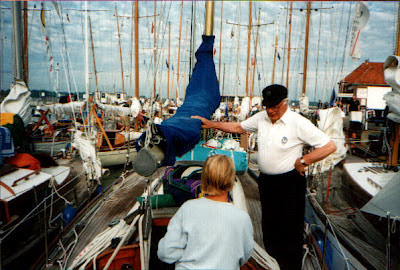 The next year we went back and found the weather a bit windier. 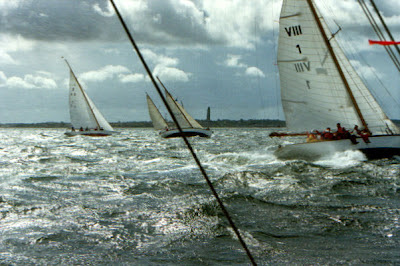 Here is Feolinn going like a rocket in about Force Seven 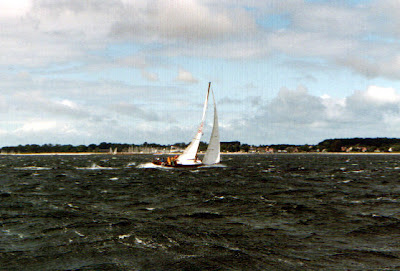 And an Eight Metre doing likewise 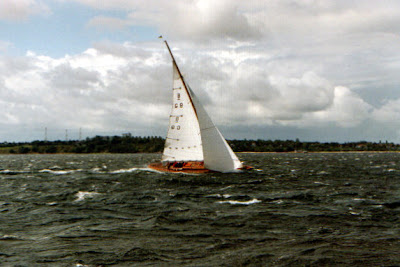 That year and later I sailed aboard the Ylva, built by Gustav Plym in 1930 and a ship that has enjoyed a fascinating life.

On all of my visits I was struck by the wonderful standard to which the German yachts had been restored, sadly contrasting with the treatment afforded to a lot of the so-called windfall yachts, which were often neglected after being confiscated by the British armed forces. 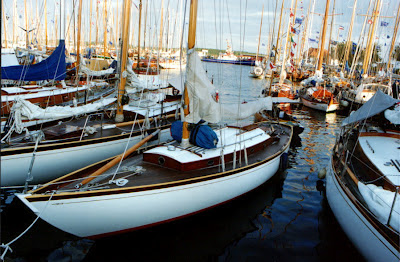 This is the Abeking & Rasmussen Piraya, probably the loveliest yacht in the harbour, beautifully restored and maintained. And finally a detail of Piraya's bow, showing Henry Rasmussen's trade mark ash rail-capping and his double arrow signature. 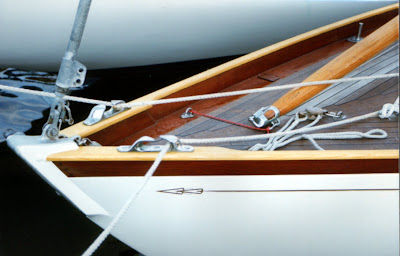