Over sixty skiffs and counting

The Isle of Luing community launched skiff number sixty last weekend and the Selkies were there to salute her, with their new flag floating in the gentle breeze. 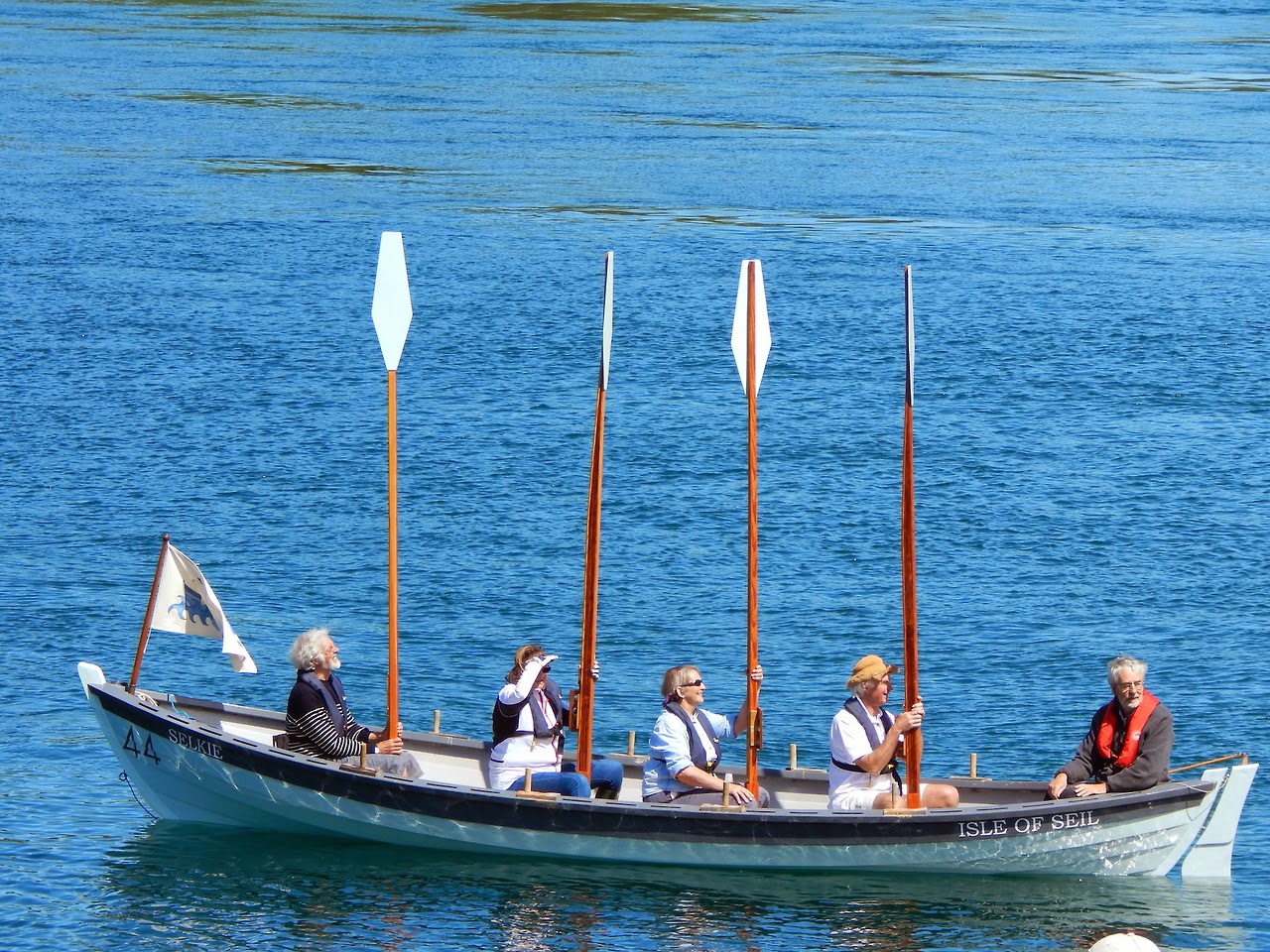 The row down from Balvicar was a light paddle of three and a half miles down tide with a following zephyr. 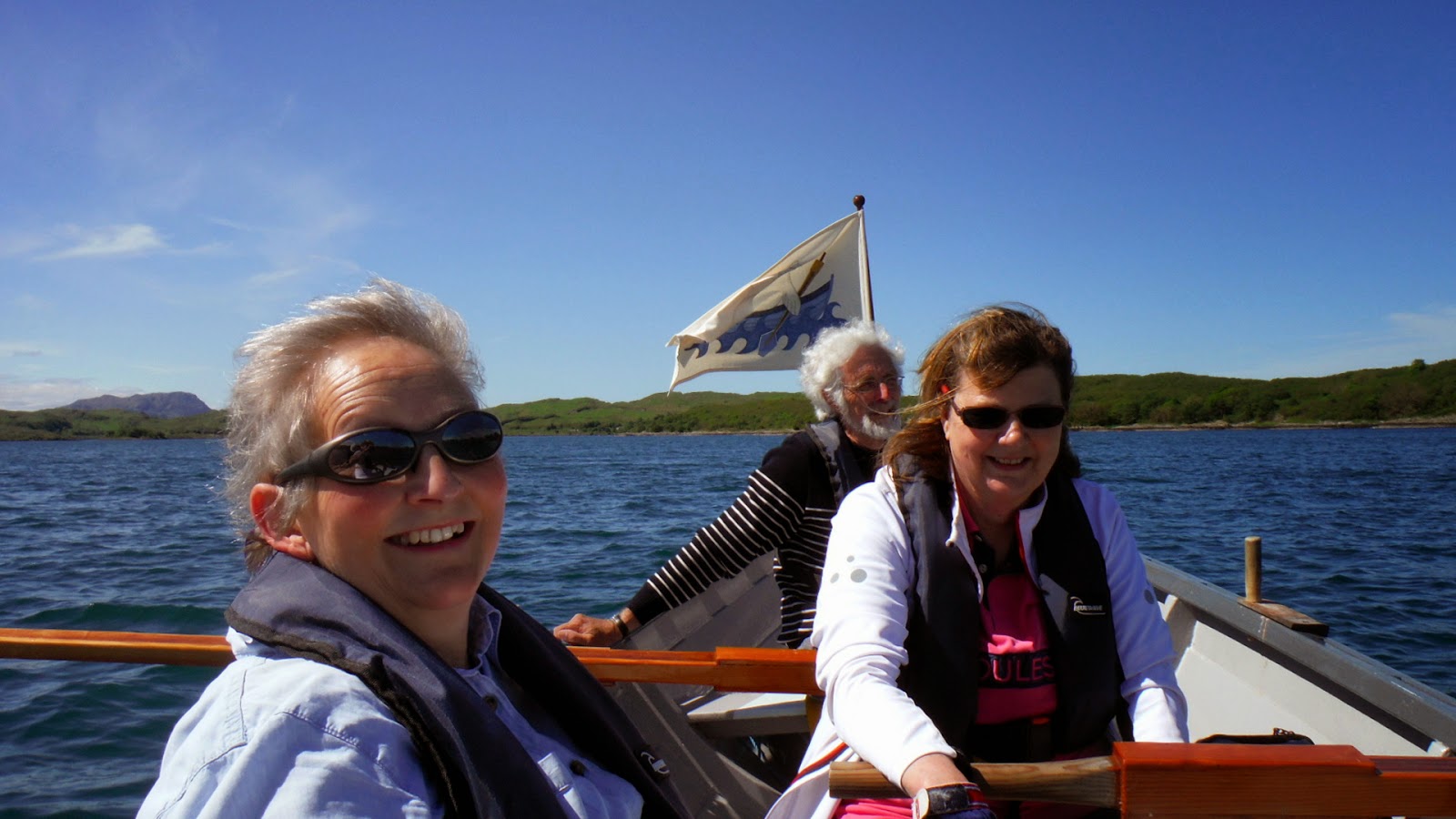 The only hazard the Belnahua, who has right of way. 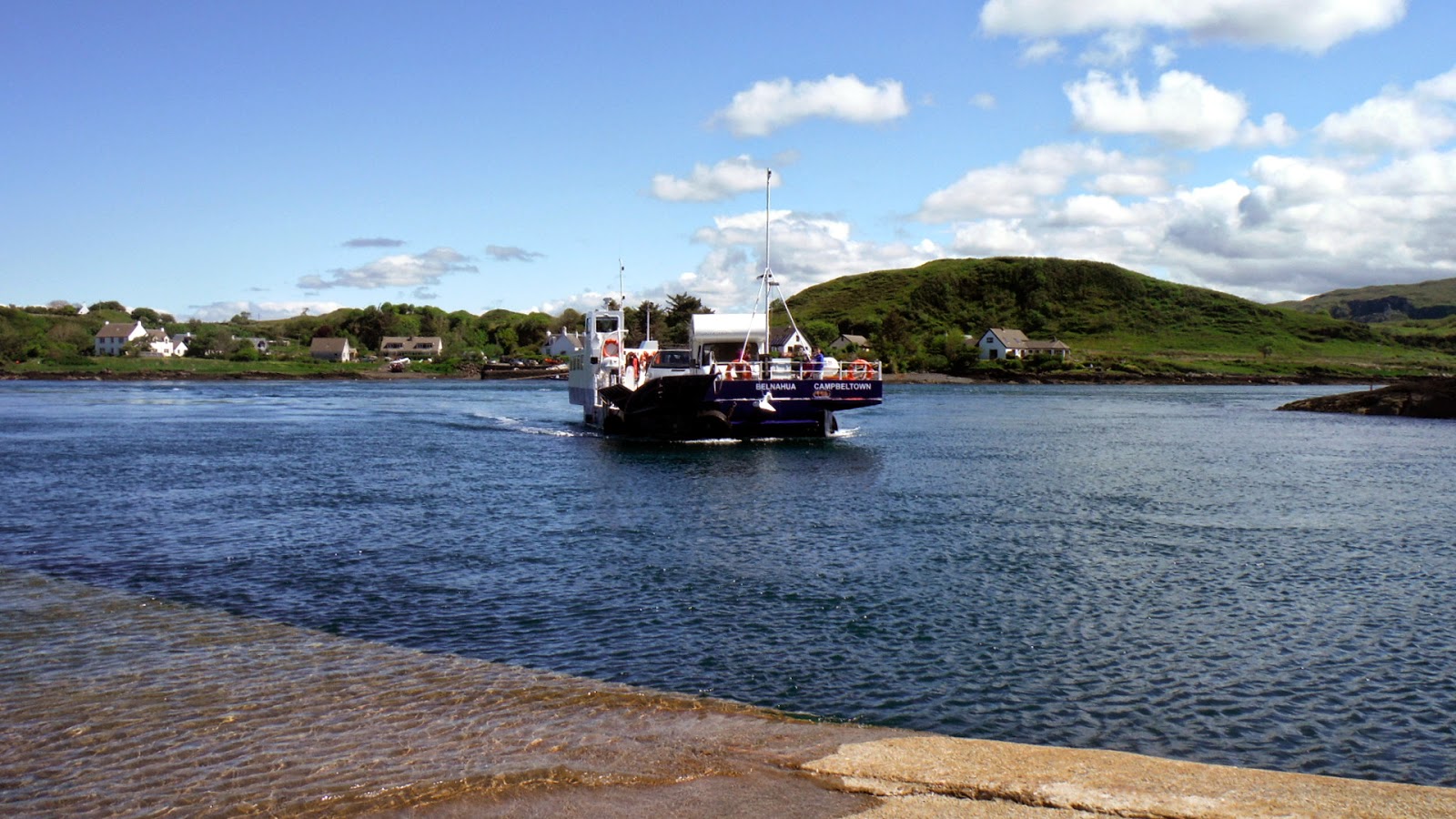 The Gill of Melfort came by road to the ferry and missed the lovely trip down, but had a nice row across the Sound. 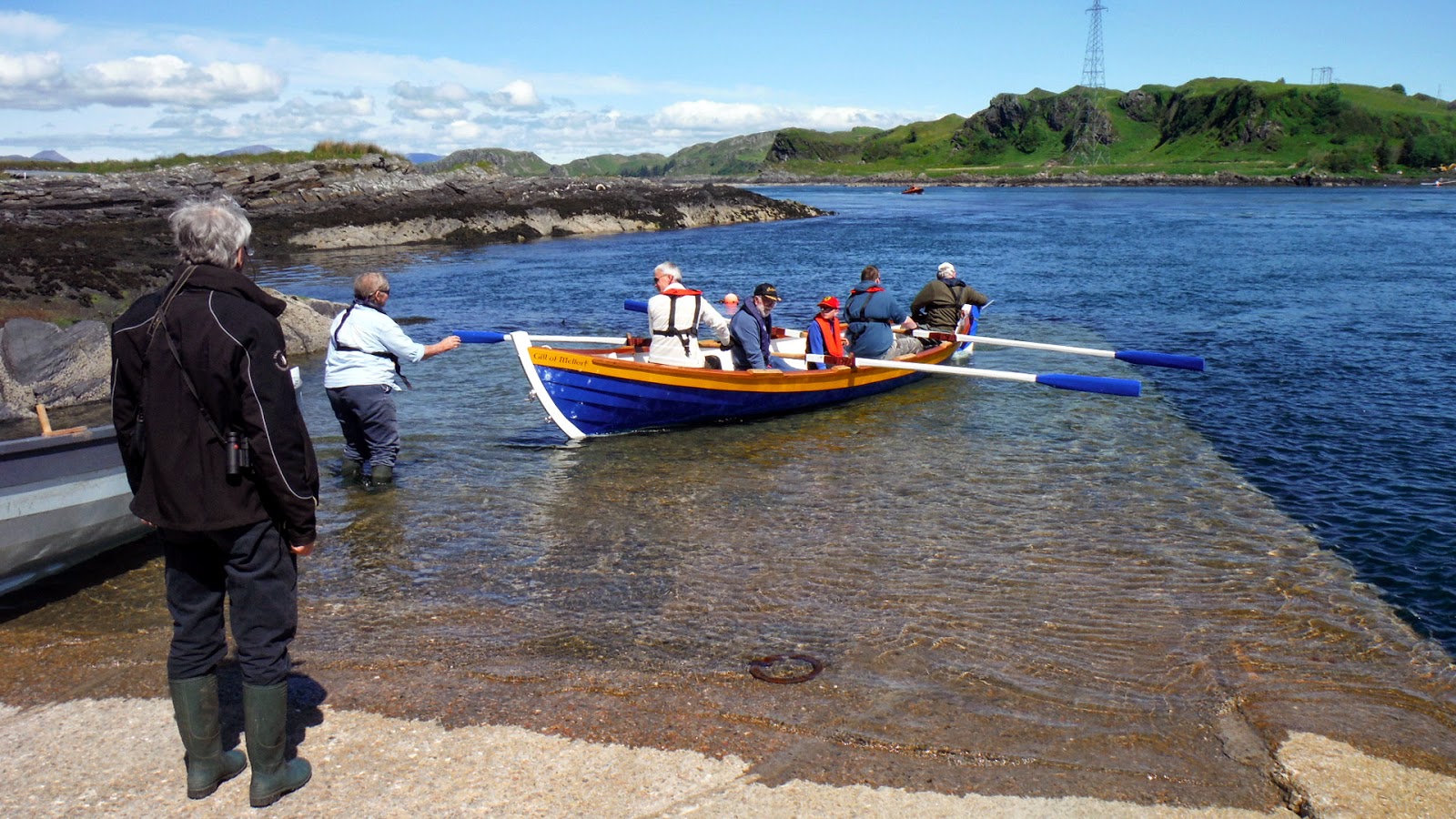 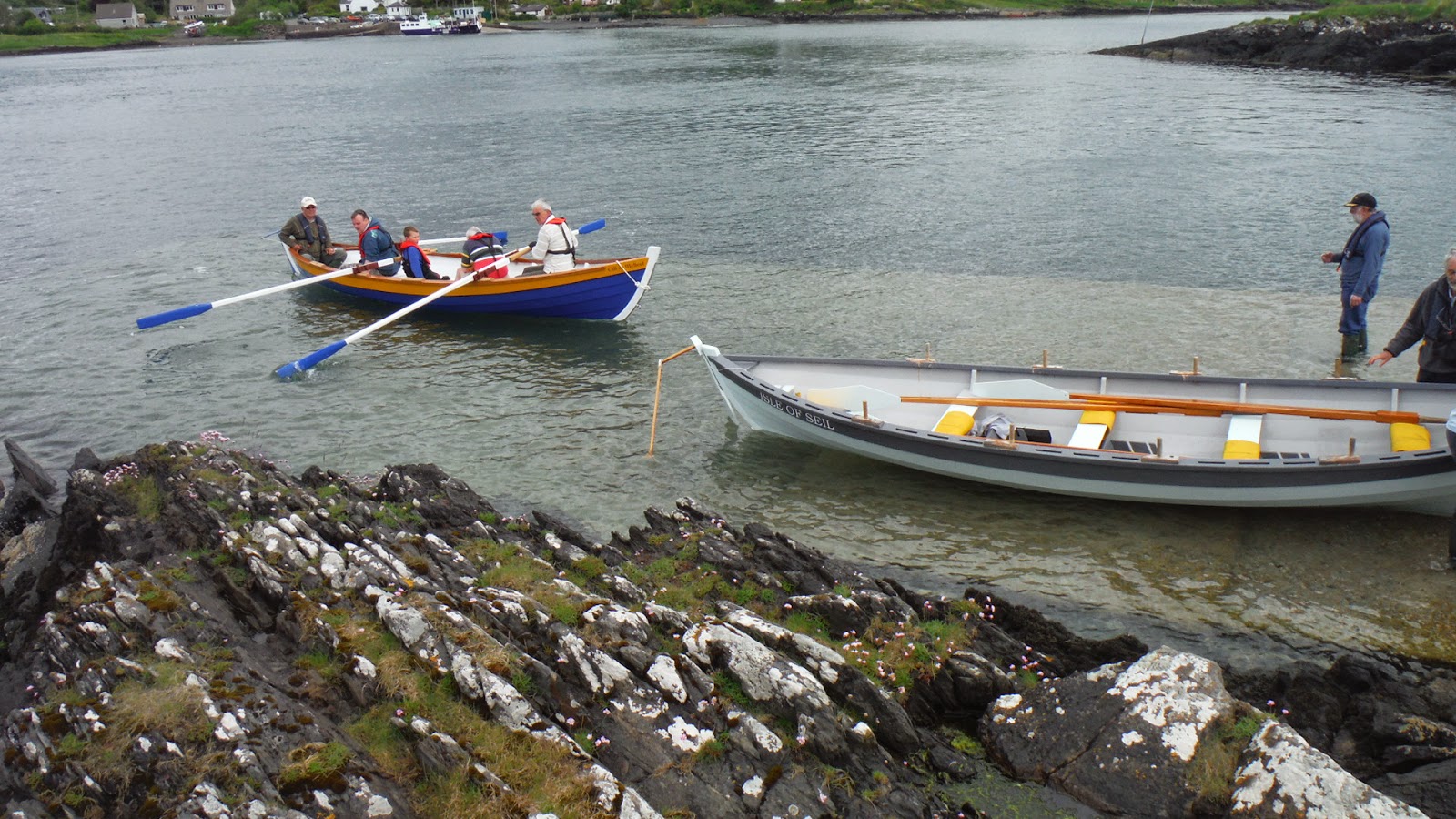 One of our surviving fellow creatures, who has so far escaped the fish farm's rifles. 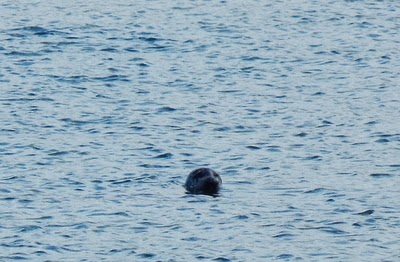 Rowing is back in strength it seems. 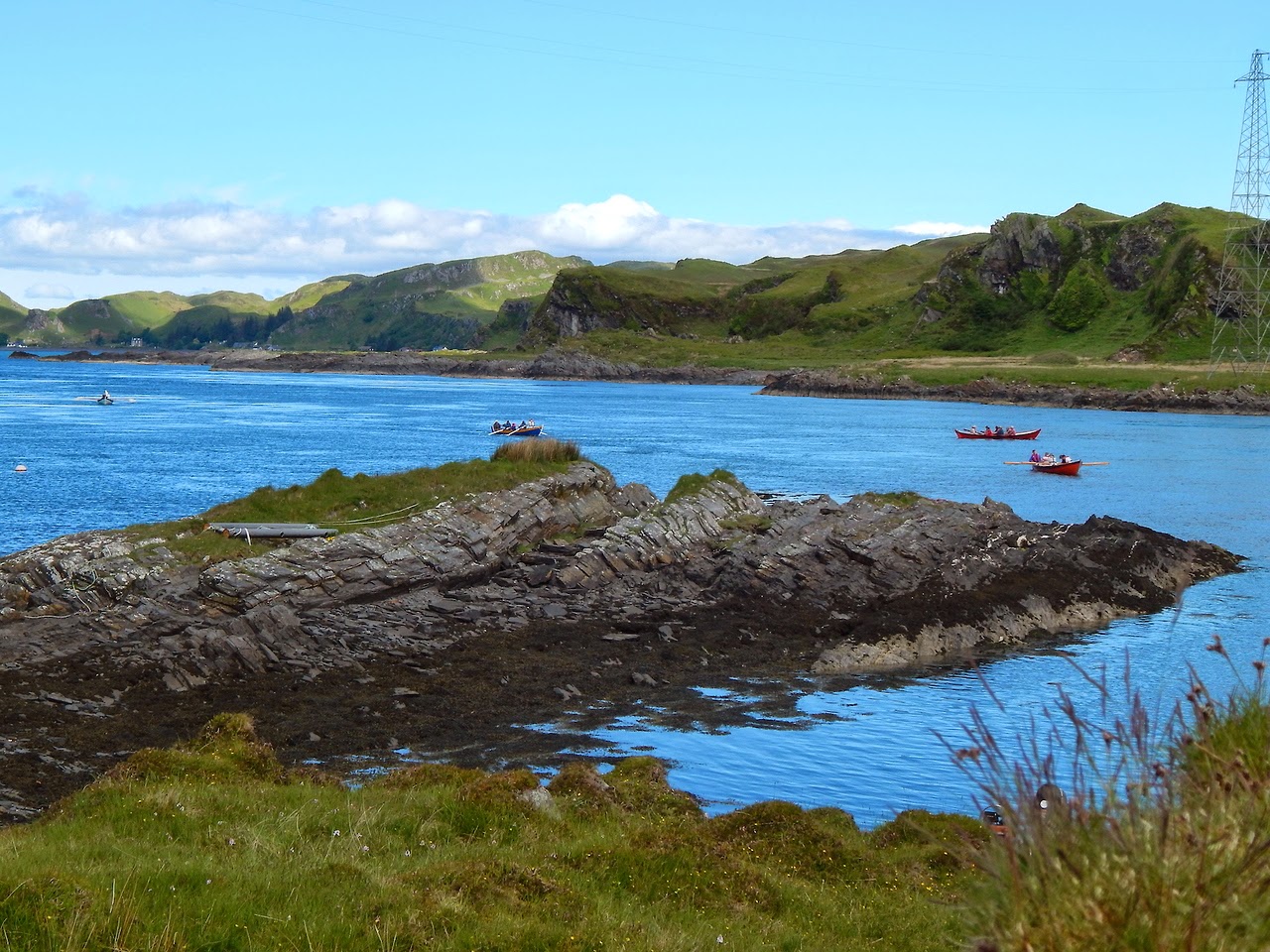 Bilderglug Report and a Sombre Postcript 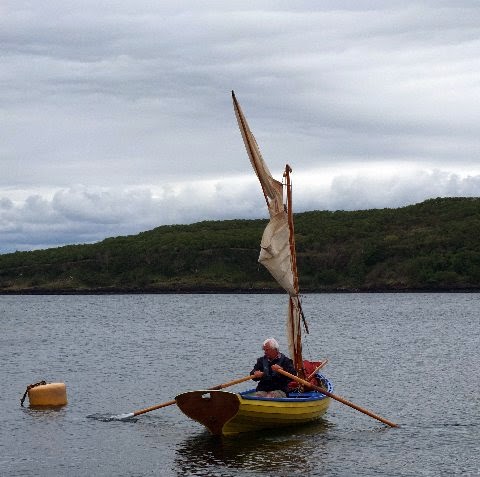 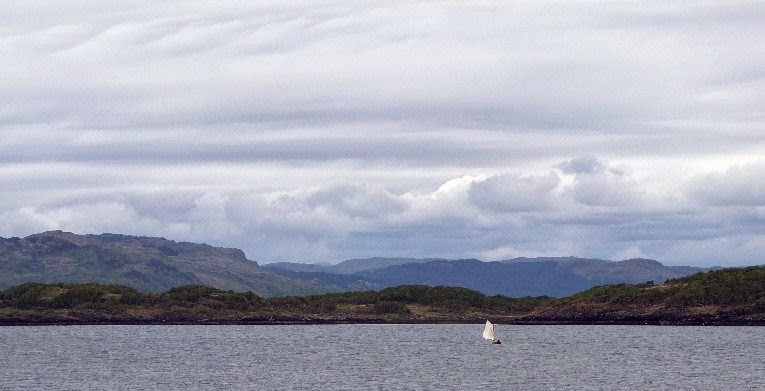 Bilderglug 2014 showed how much fun you can have when it’s really cold and wet. The ditty bag my Swedish friends Petter and Birgitta gave me has a legend which translates “my little boat makes me awful wet round the middle when it’s stonking”, which just about sums up this year’s highly secret muster in a tiny village on a small much perforated island somewhere.

At least having the Kelpie there in advance meant that I could drive round in comfort and warmth. It was good to get the tent up and the chefs in charge of the enormous Friday feast really surpassed themselves.

Saturday was fun, charging about in a brisk wind and rain with the borrowed Mrs D while Mr D gave his Flashboat a test drive under sail. Circumnavigating Right Island was followed by picnic on Shuna and a trip home round Wrong Island to base, with barbeque and ceilidh courtesy of Paul and Chris with squeezebox, clarsach and fiddle. Songs in sundry tongues from English to Russian, voices female and male, some classical flute solos and some poems and stories too. All good traditional stuff and this year two complete sets for the Jig, which means that sixteen can now do it and at this rate the whole company will be managing it by 2016.

Sunday was wet and cold, Mrs D had been reclaimed and so I was alone. It blew a bit, but not enough to make things interesting. It rained, then rained a bit more.

At lunchtime we visited Pol na Gille once again, in the shadow of cages licensed by the so-called Scottish Environment Protection Agency to hold about 2000 tonnes of salmon, up to half a million mature fish. My article published a year ago about the industrial pollution of the bay seemed to have produced a result, as most of the debris had been removed, no doubt because there’s now a new application in to ruin the bay round the corner with yet another fish farm. Here is the map showing the location:

A cold, wet, sombre Sunday ended with a warming evening of “lectures”, some of which may or may not be eventually published online.

Recovery of the Kelpie took place the following week with the aid of the buses and the ferry to the island, then a lift from Richard who took the photos at the top of this post.

Industrial fish farming is doing a lot of damage to the SNP and hence to the cause of Scottish independence, which is desperately sad, because I believe that whichever major party was in power we would see precisely the same destruction of the environment.

There was massive expansion under the previous Labour regime and while the Libdems and Tories will not get near to power in Scotland this century their few surviving placemen vote for the farms whenever they can. A pathetic example of this is Councillor Currie from the Isle of Islay, elected by a population which refuses to allow farms, but who felt he could safely vote for the one at Ardmaddy.

The policy seems to be driven by civil servants who have far too much power and who have become far too close to the industry for proper independent analysis of the issues. In case we the public find out what’s going on, under the freedom of information rules, government has decided not to require the industry to disclose data on subjects such as the prevalence of sea lice. No land-based industry would be allowed the same liberty.

Nobody expects politicians to care for the environment, but they should care for the fragile micro-economies in places like Seil, whose private sector businesses are entirely dependent on the quality of life and the visitor experience. Pollution from the farms put an end to recreational diving years ago, by wrecking many of the delicate life forms that exist below the surface. Placing colonies of caged salmon in most of the bays will put an end to the pleasure boating, kayaking and pottering that bring so many visitors. Killing or scaring off the local wildlife self-evidently puts paid to eco-tourism (officially over a dozen “rogue” seals were shot last year at Pol na Gille).

The proposed “farm” at Shuna Cottage will if allowed destroy the amenity of one of the last unspoilt anchorages and may mean the end of Bilderglug, which has done its bit for the local economy for the last twelve years. Comments can be registered with the local authority by following the link here: