Happy Holidays on the Costa Clyde 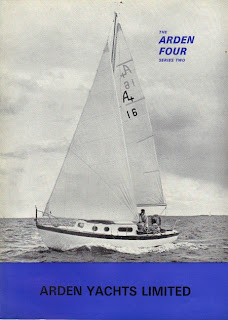 The first motor charter cruiser service on the Clyde has been established at Helensburgh and on Sunday the eight ton cruiser Morning Sky is due to leave with the first party of six persons on a week’s cruise on the Firth of Clyde.

The second boat is due to be launched by the end of the month. Chartering from Sunday to Saturday costs £30, and such has been the demand that the first boat is booked until mid September.

The boat was designed to keep down the price both of construction and chartering, so that a high class yacht finish was not contemplated.

Morning Sky is 28 foot 8 inches overall with a beam of 8ft 6in and a shallow draft of 2ft 6in. The air-cooled diesel engine of 13hp, driving a four bladed 18 inch propeller through a 2 to 1 reduction gear, gives a speed of seven knots and a cruising range of 150 miles.

There are berths for six persons, more than 6 ft headroom in the cabin, and the boat is chartered fully fuelled and watered and complete with cooking stove and utensils, crockery cutlery and bedding. The firm will even put groceries on board if they are ordered in advance.

The cruisers will be covered by insurance and for third party risks up to £25,000. Their cruising range has been limited to the Clyde above a line drawn West through the Little Cumbrae and the North of Arran, which leaves plenty of water to explore.

The boat’s outfit includes the sailing directions of the Clyde Cruising Club, a set of charts with suitable anchorages marked, anchor, chain, warps, fenders and a ten foot dinghy.

Thus the Glasgow Herald of 25 May 1960 introduced Scotland’s first charter business,  set by two enterprising Glasgow businessmen and boating enthusiasts in premises in East King Street, Helensburgh. To build the boats they recruited the young George Hulley, a time-served boat builder who had been building Air-Sea Rescue craft in the RAF.

John McNiven’s son Renwick has sent me some nice memories of the early years of the business and a picture of the first of the “Skye Class” boats. 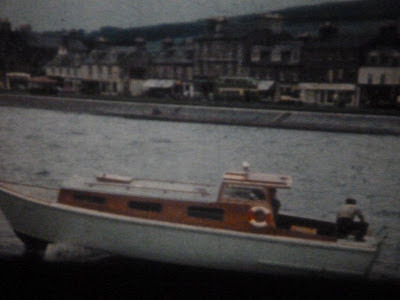 It would be interesting to know if either of the two survives. John writes

“Charter operations started up from an abandoned wooden pier near the head of Loch Long, however it turned out to be abandoned for a reason and the council promptly condemned it and put up the barbed wire fencing shortly before the charter boats were due to return.

One of the first charter parties turned up with a sea-going trunk fit for a passenger liner, this being too big to go in the cabin was left on the cockpit sole for the duration of the charter. However after this start the party phoned later to say that they were in ‘A-roach-er’ and after some language translation it was  ‘Arrocher’ at the head of Loch Long, turns out that the point of the call was to say they needed a new anchor.  The 30 fathoms of chain and anchor had gone runaway over the side in too much water depth in Loch Long breaking the securing strop.”

The motor cruisers were followed from 1963 by the very neat little Arden Fours,

“the concept being a ‘Folkboat with headroom’, sketched during a meal using napkins!”

Thirteen were built in wood, then another fifty five hulls were built in fibreglass in England and shipped to Helensburgh to be finished. A final two, to a slightly different design, were built in 1971/2. 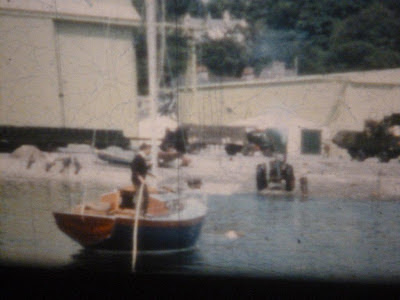 "The journey along Helensburgh’s promenade always had a large following, but then the tractor could only pull at a walking pace of  4 mph!"

Lots of Arden 4s survive and do good service as tough, seaworthy little ships with no great pretensions. One of them, built as Dirlie for the Crockett family has arrived in our area. 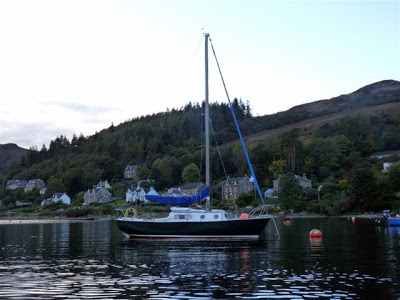 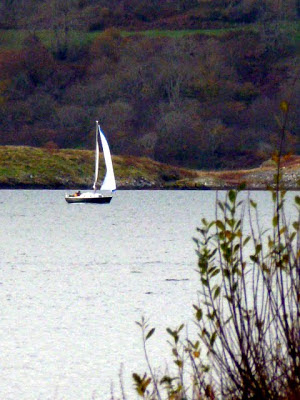 Latterly the surviving member of the team, George Hulley, ran his chandlery business from MacAllisters yard in Dumbarton, where generations of west coast optimists, myself included, toiled away on restoration projects. It was always a challenge trying to persuade Mr Hulley to sell glue with slow hardener, rather than fast stuff which he was convinced was essential in Northern climates. He made up for this minor eccentricity however by his legendary quiet good humour and patience.

The internet is a useful resource for a blog like this. Often the effort is fruitless and boring but occasionally throws up a little nugget. Googling the Ardens produced

Fine, young man, it was fast… I found an old buy boat chin, and it has a photo of yore Ardennes forest zone tribe, she is generic can not see the keel - This is the same design? …the yore Ardennes forest zone 4 would have been to add wood and then later in the GRP…. im not sure if the george hulley is designer when time i being chatted designer he mentioned a certain extent, he suggested it was not his. He also told me that some arden 4s augmented england south.- georges hulley in the dunbarton in operating a candle maker enterprise.

In Hulley Dumbarton Now, I may be disturbed." 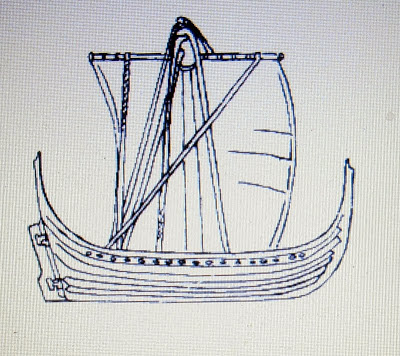 Eoghan: I don't know what the MacDougalls had done to deserve having their lands taken away and Sir Dugald had a few years earlier backed King Edward against the Bruce. It all goes to show the Campbells usually come up smelling sweet. Glad (in a way) that my great great great Grannie was one.

Choinnich: It was in the Pass of Brander that the MacDougalls learned a lesson taught by Robert the Great, with young Colin Campbell at his shoulder, to the effect that EDW I was a bad person.  That is what they did and some people in Argyll have yet to forgive.  Now, while it is the case that the Campbells, as signatories of The True Solemn Oath and Covenant, found themselves opposed to the heirs of Marjorie Bruce (who would have done far better to marry young Colin of Argyll rather than Walter Stewart), and thus sided with a wee bit Gairman Lairdie, the MacDougalls appear to have escaped without a blemish on their estates, although their character is well known throughout Argyll.  Now I find myself asking, 'What is this about taking lands off the MacDougalls?  There is surely only MacCallum Mhor that has the power to do such a thing, and himself short on the powers that were once his to command.  If it is not Cleann Caimbeul that is doing this thing then it has no businness to be done for we alone can do such a thing and end up smelling of roses, even if they be the Floo'ers o' Edinbro.  Stand proud in your Campbell heritage, my kinsman.

The charter was granted less than 50 years after the conflict between the emerging Scottish kingdom and Norway was resolved at the Treaty of Perth in 1266, which was prefigured by the Battle of Largs in 1263. The early Scottish kings were finding it a hard job coming to grips with the people of the islands, who retained fond memories of the autonomy previously enjoyed and of course were themselves partly of Norse ancestry. The Bruce operated a policy of consolidating his grip on the main land by building castles and installing suitable tough guys to control the unruly Gaels.

It’s interesting to see the notorious political flexibility of the well-named Campbells (literally Cam Beal – crooked mouth, not of course referring to a physical attribute) to the fore so early in the history of our nation.

Sea power was vital to ruling the islands in the pre-road period. Providing a galley of 26 oars was a major endeavour justifying the grant of a huge tract of land, although one can imagine that retaining control would also take some effort. There would have been a big tribe of angry MacDougalls to contend with for a start.

I’ve tried to identify the various estates involved, extending from Loch Awe in the East to the North shore of Loch Melfort on the South along to Degnish Point, then the West boundary running up the middle of Seil Sound to Clachan Seil, but including Torsa Island with the Castle of the Dogs and a North boundary running somewhere to the North of present-day Kilninver along to Loch Awe again.

The anomaly is the inclusion of Ardincaple at the North end of the Isle of Seil. Literally Ard na gCapull, the “point of the horses” this may refer not to real horses but to the black rocky reefs and breaking waves off the point, resembling in the mind of the poetic Gael wild horses. Ardincaple is the site of Ardfad Castle, the seat of the MacDougalls and awarding this to the Campbells would have been a serious provocation, especially as the remainder of the island seems not to have been included. Perhaps that was granted to another of the Campbell knights.

Regarding the actual galley one can assume that there would have been thirteen thwarts or benches, two oarsmen on each and “rooms” of about a metre in length, suggesting a hull length of at least seventeen metres, fifty six feet, if we allow a couple of metres at each end. The image at the top of this post has seventeen oar ports, thirty four oars, and the biggest galleys seem to have been forty oared, but there’s a lack of archaeological evidence and it’s always possible that once the charter had been granted the galley didn’t actually materialise. 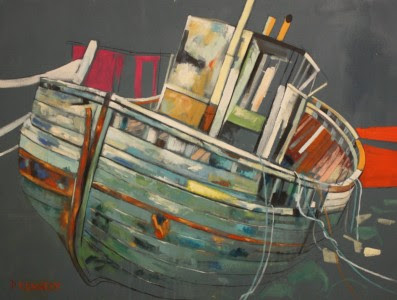 Paul Kennedy has been moving on from recent figurative work and last summer spent time revisiting some childhood haunts by the sea. He found a mixed scene with some of the scenes from childhood only memories and replaced by images and colours from a new more industrial age, which present interesting new challenges to the artist. Some things of course remain the same - a fisherman’s weathered face and the old lighthouse at Crinan, while the old world quietly fades away. 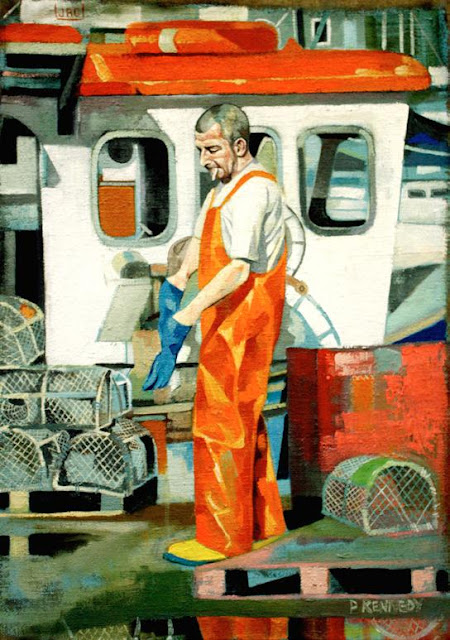 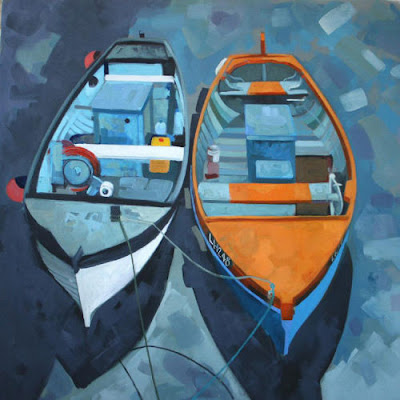 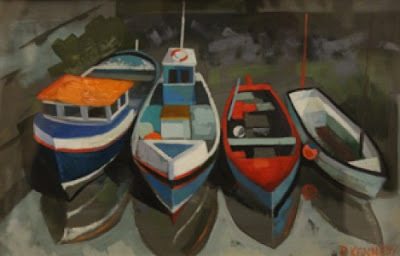 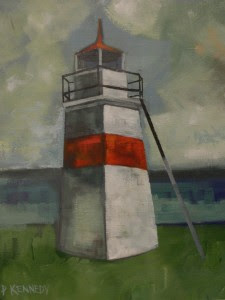 Paul can be contacted on paulkennedyart@googlemail.com.
Posted by Ewan at 01:37 No comments: 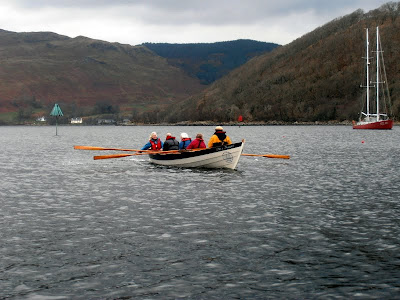 Just after Hogmanay phones started ringing on the shores of Seil Sound as recovering residents tried to find out exactly what had just passed their windows. Those of us in the know were able to tell them that the long double-ended boat now speeding under the bridge at Clachan Seil was Chris 0’Kanaird enjoying his first trip of 2013. He (she?) had come over from Anstruther for the holidays. 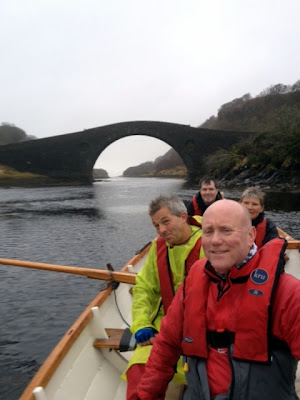 The long-awaited Kilmelford Rowing Club has now been formed and hope to start on their kit later this month. Babs and Alan kindly brought Chris round to Loch Melfort and the weather kindly allowed some of the team to get out on the water. We had a good few circuits of the top end of Loch na Cille and got a nice introduction to skiffing. 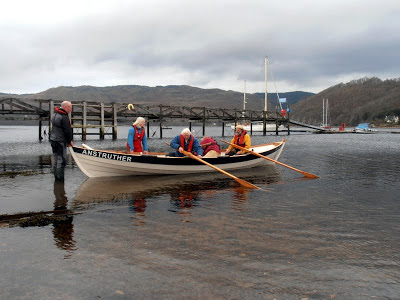 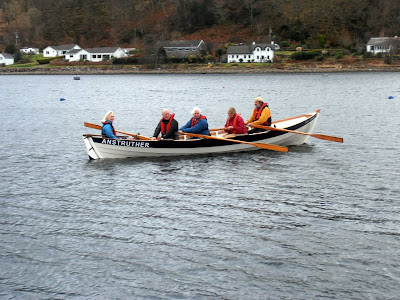 Personally the thing that struck me most was finding how little resistance there is as the skiff gathers speed. There was probably less effort involved than in sculling about in a much smaller dinghy. One minute we were at the edge of the moorings, the next right up at the head of the loch, so fast that the photograph Iain B took of us is a wee bit blurred. 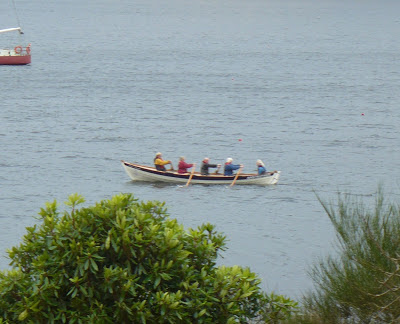