Harrison Butler and his Z4s 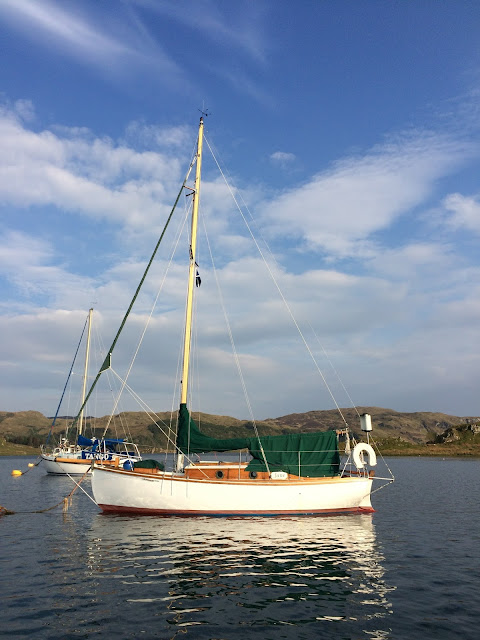 Some of the nicest boats around are drawn by gifted amateurs and the lovely designs of the ophthalmologist T Harrison Butler are good examples. An interesting feature of Dr Butler's second career as a yacht designer is his enthusiasm for metacentric analysis, a curious theory, which those who understand it say doesn't stand up. As elsewhere in life a dodgy theory sometimes produces good results.

June is one of about 50 little yachts built on a production system by Alfred Lockhart Marine of Brentford in Essex in 1938 and 1939. It seems that Captain O M Watts had seen a commercial possibility in Butler's Zyklon design and the Z4s were the result. The attraction is very obvious, when one reflects that potential buyers recovering from the effects of the Depression years would have been  keen to get afloat without undue expense.

One assumes that the entrepreneurial Captain Watts would have gone out to tender for the construction process, as I believe that Lockharts were originally house, rather than boat, builders. Without a tradition behind them they built the Z4s upside down over iron frames, hulls glued and splined, the intelligent and practical way to go, but rarely adopted by boatyards in the UK. As a result it seems most of the fleet have survived. Building upside down with frames in means that you have to get the important sheerline right first time.

These are tough wee boats for their overall length of under 22 feet and about 7 feet beam, displacing 3356 kilograms with 2700 kilograms of external ballast. By contrast the Kotik design that I'm currently building should displace about 1200 kilograms with 430 kilograms of ballast on the same overall dimensions, although admittedly with longer ends, which of course the Guru of Luing is always pointing out add nothing other than weight (apart from North European charm). Having said this, there's an understated practical elegance here.

An interesting contrast is Ed Burnet's very similar design, about which I wrote here: Frolic

It's also interesting to compare the Z4 with the much larger Mat Ali. Her owner, Charlie Hussey, has written about her here A Builder takes Liberties, where there's also a brief discussion about aesthetics.

I had a nice sail on Mat Ali in a gale of wind a few years ago. so can testify that she's a great sea boat.  You can see a family resemblance from the post I wrote at the time here http://scottishboating.blogspot.co.uk/2011/09/autumn-visitors.html

Thanks to comments on the forum at Wooden Boat I realise that the ballast figure for the Z4 is wildly inaccurate, it appears to be about one metric ton. It's still a lot for a wee boat though!