A great deal has been written about the legendary Fifes of Fairlie, the three generations of craftsmen who produced some of the loveliest yachts ever seen. Many of these are of course still around, a few in original condition but mostly re-incarnations and a few entire new-builds. In fact this talented family were spread much more widely than just around Fairlie and this post is an attempt to commemorate one of the other branches of the family which has been somewhat eclipsed by their more famous relatives, namely the Fyfes of Bute. The above appears to show this family of three brothers and some of their workforce in their yard on the shore at Ardmaleish, near where Alfred Mylne was later to establish his Bute Slip yard.

In her well-known history "Fast and Bonnie" May Fife McCallum recounts how:-

"A cousin [of William Fife I] John, who was a carpenter in Ardrossan, and his wife, both died about the same time, and an uncle in Ardrossan took care of their three sons. Apparently these orphaned boys were not happy in this household and walked from Ardrossan to Fairlie, a distance of about ten miles, to throw themselves on the mercy of their father's cousin. He took them under his wing and employed them as apprentices. On completion of their apprenticeship they crossed to the island of Bute where they set up a successful boat building business at Ardmaleish."

This struck me as a slightly romantic tale of Victorian hardship and kindness and I wondered if in fact the boys were transferred by agreement not just in order to be trained but also to add much needed workers to the rapidly expanding Fairlie yard. I decided to try to discover a little more from the records.

I find ancestral research fascinating and have had a lot of pleasure, for example, in tracing my own tribe back about eight generations. A few years ago this sort of research would have entailed numerous visits to the national and local archives and been too time-consuming for anyone with a career to undertake. Now thanks to some excellent websites matters are much easier.

There are still pitfalls, such as confusions over spelling and the tendency for families to favour particular forenames. There was also a Scottish tradition of naming later children after earlier ones who had died, which doesn't help the historian. Both of these aspects can be found in the Fyfe/Fife history, with forenames such as John and William being favoured.

According to May Fife McCallum a John Fyfe was born in Kilbirnie in 1743 and moved to the Earl of Glasgow's Kelburn Estate to work as a wright in 1770. He and his wife Janet, nee Fyfe and probably a cousin had at least six children of whom four sons, John, James, William and Allan followed their father's trade, William becoming the famous William Fife I. She goes on to record:-

"It appears that John Fyfe Junior, the eldest son of John the wright on Kelburn estate was building fishing boats at the beginning of the 19th century. Old customs records list fishing boats built by him at Fairlie and registered at Irvine, the local port of registration at that time. As a youth William Fife, born in 1785, may have been attracted to his older brother John's business, and thus began his introduction to boat building."

Nothing more is said of this John Fyfe Junior and I was intrigued to find out if he could possibly have been the father of the three orphans, whose names I already knew were John, James and Thomas. I discovered the following, from the 1841 Census:- 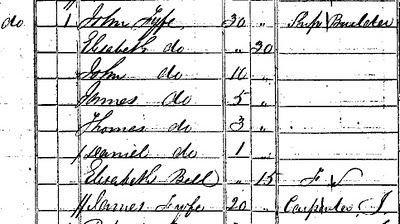 This establishes two things. Firstly this John is not John Fyfe Junior, as he was only thirty in 1841. Secondly he was an established shipbuilder, not simply a carpenter. A further search showed that he died from jaundice on 14 May 1848. I couldn't find his wife's date of death. Note that John's brother James is living in the house, as he features later in this story.

A look at the 1851 Census showed that the boys weren't living with William Fife I at that time. Here is the entry for that famous household:- 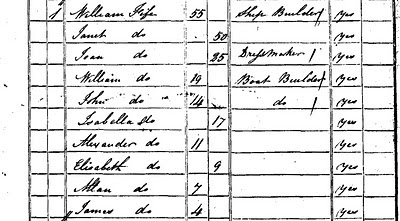 So where were they? A further search shows two of them in Ardrossan, John a ship carpenter lodging at number 5 Harbour Street and James with his uncle James next door, still an apprentice. It also confirms that both were born in Fairlie. I haven't managed to trace younger brother Thomas and it seems the youngest, Daniel, had passed away.

This seems to confirm that far from being helpless little orphans the brothers were useful, fully or at least partly trained ship carpenters by the time they moved back to their place of birth in Fairlie and joined the workforce of William Fife I. Nor did they stay there long, for by 1856 a large wooden building had gone up on the shore at Rothesay, the Red Shed, probably not actually red in colour but named for the red rocks on which it stood. Here is Alexander Wilson's depiction of it.

On the front at Rothesay in June 2003 during the Fife Regatta I made the acquaintance of a delightful and well-informed lady, who turned out to be Miss Jean M Fife, perhaps the last surviving member of the Bute Fyfe family still in Scotland. I kept in touch with her and she kindly supplied much more information, with permission to publish it as I saw fit. What follows is based on her research in local libraries, conversations with local residents and so on, but not least her own memories of her family and a lifetime of holidays on Bute.

It seems that there were two James Fyfes building boats in Rothesay in the mid 1850s, described as Senior and Junior, but with only half a generation between them. This suggests that Uncle James (born about 1816) had moved from Ardrossan and nephews James (born 1832), John (born 1833) and Thomas (born 1838) had crossed from Fairlie to join him.

These Bute Fyfes were an industrious bunch and built almost anything that could float, apart from yachts. In his "History of Rothesay and its People" Dr Lawson records:-

"The Red Shed was below the level of the road. What is now the [New Rothesay, later St John's] manse garden was the ground on which the larger keels were laid of smacks of a goodly size. Smacks, fishing skiffs and rowing boats (also small boats with round sterns and one sail) were the craft built by Messrs Fyfe. There would be a number of new boats lined up on the ground on the margin of the roadway extending to the ladies' bathing place (now Isle of Bute Sailing Club). Behind the ladies' and gents' bathing places (the old bathing station) the land was lower than the roadway. This depression was used in winter time for the laying up and storing of small rowing boats."

"On Wednesday last there was launched form the boat-building yard of Messrs. Fyfe a beautiful craft of the gigger rig, c. 20 tons, property of Mr Thorburn, Farmer, Isle of Muck. She was named "The Islander's Bride" by Miss Richmond, daughter of Mr Richmond, Temperance Hotel-keeper, Rothesay and is intended to carry produce of the isle of Muck to Tobermory, the nearest market port in that district, the owner being the lessee of that isle. She has a very faviurable appearance and, considering the cost she is built for, promises to be a swift sailing craft and a credit to her young and enterprising builders."

This would have been one of the first larger vessels built by the family, but they went on to greater things. In April 1858 the Buteman again:-

"Launch! On Tuesday afternoon there was launched form the building yard of Messrs Fyfe a sloop of c. 70 tons burden, the property of Mr Kelso of Arran. The vessel was name "Catherine Kelso." The launch was conducted with systematic accuracy and the vessel glided down the ways gracefully. We hope soon again to witness the launch of as large, if not larger craft form the same yard."

By 1861 the Census described James as a Master Ship carpenter, John as a ship carpenter and Thomas  as a mere journeyman. One can see that they all knew their station.


With the coming of the railways and the Clyde steamers Rothesay entered its heighday as a holiday destination for all classes of society. Wealthier families could afford to build or rent villas along the front, while more ordinary ones went into lodgings for the annual Glasgow Fair. There was terrific business for boat hirers well into the Twentieth century, in fact right up to the arrival of cheap package holidays in the 1960s.


After many years the road along the front at Rothesay was improved and the Red Shed was taken down. The Fyfes moved round to Ardmaleish, where they established their second yard on the site where there now stands a sea-food factory. Thomas (Miss Fife's great-grandfather) didn't join his brothers. Instead he concentrated on building rowing skiffs and in the 1881 Census is described as "boat-builder/hirer (17 boats)."

My grandfather used to take his family on holiday to Port Bannatyne and my  late father recalled that on such a summer's day in the 1920s they were out in a rowing boat off Ardmaleish Point when a whale appeared alongside the boat and alarmed the family. Fortunately my great-aunt Maggie, recently returned from her exploits in South Africa and quite fearless, sang to it and made it go away. It's very likely that the vessel had been constructed by the Bute Fyfes, but probably not by Thomas, as he eventually couldn't cope with an outdoor life and went to spend the rest of his life working in the yard at Fairlie.

The remaining Fyfes eventually concentrated on building fishing skiffs and three of James Fyfe's sons were working at Ardmaleish until the 1930s, by which time the boats were getting much bigger and designs were changing fast. Two of John Fyfe's sons were trained there, but George was drowned aged twenty in 1898 and  John emigrated to Canada in 1906. Most of Miss Fyfe's surviving relatives are now in Canada and the United States.

Anyone interested in finding out a bit more about some ancient Kennedys can visit http://www.kennedystory.blogspot.com
Posted by Ewan at 05:01