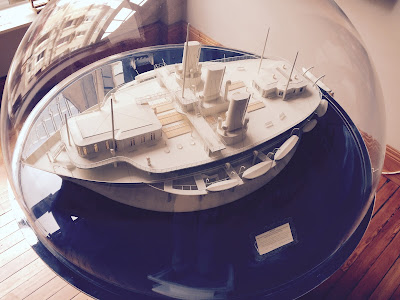 The memory of childhood visits to the Kevingrove Art Gallery, from the era when much of the ground floor was devoted to the ship models, has stayed with me, in common I’m sure with many other Glaswegians of a certain age. Among the sleek racing yachts of George Lennox Watson and the great Clydebuilt liners some real oddities stood out, none more than the almost circular Russian Imperial yacht Livadia, her mystique enhanced by her association with the exotically named Admiral Popov.

In the old days you couldn’t touch the models in their glass cases, but at least you could see them from all sides and get a real sense of their form and beauty. As the years went by they seem to have diminished in importance, first moving to the old Transport Museum at Kelvin Hall, where only a fraction of the total complement was on show, then on to the Riverside Museum, where it seems even fewer can be seen. Much worse, the survivors are now largely built into wall displays. Livadia in particular is currently immured at a height that makes it impossible to appreciate her remarkable design.

The Riverside model was built to the order of Sir William Pearce, the owner of John Elder & Co, and for many decades it sat in a case in the boardroom at Fairfield. A second, more elaborate, model was built at a reputed cost in 1880 of £500 (about £50,000 in today’s money) and sent by Pearce as a present to his client Tsar Alexander II. It sits today in a museum in St Petersburg. 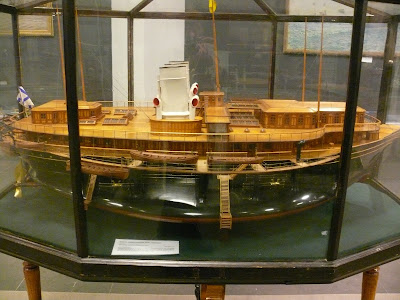 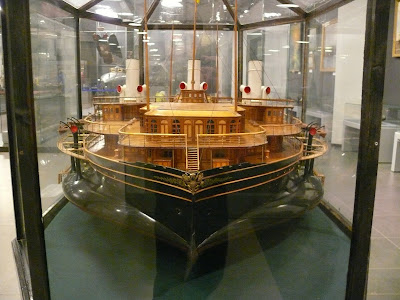 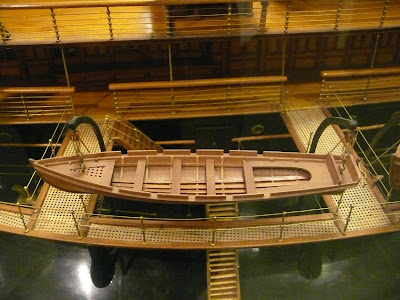 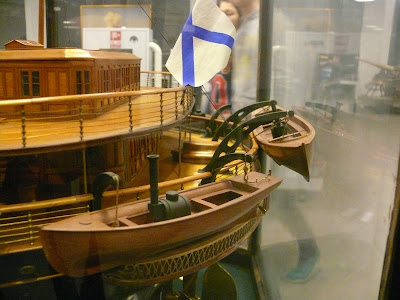 Such models were an important part of the process of obtaining an order and creating goodwill for the builder. Pearce would have realised that the model would enable the Tsar’s dream to be shared with an audience who would otherwise have had little opportunity to see the ship in real life and put his shipyard into the limelight.  It gave the Tsar the opportunity to explain his designer’s radical ideas to those who may have had little or no experience or interest in reading technical drawings. No doubt he would also have pictured himself strolling the spacious decks or hosting a reception or ball in rooms of a size and proportion not usually found on a ship.

Viewing that model, it would be easy for the layman to appreciate just how radical a departure from the conventional Livadia was to be.  It would have been obvious that thanks to the ship’s enormous beam it would be stable in the water (and incidentally make a steady gun platform), for this was the thinking behind the project.

At the Leiper Gallery we decided that our contribution to the Festival of Architecture would be an exhibition dedicated to the life and work of William Leiper and we wanted to include Livadia, which played a significant part in his story, the commission to design the interior being a sufficiently attractive project to lure him back from Paris to resume his architectural practice.

This raised the question, should we try to borrow an existing model or commission a new one? Faced with a choice between which of the two great cities would be more easily persuaded to lend its model we decided not to try.

Model making as a craft has been around for centuries and has greatly moved on recently. Victorian modellers sought total accuracy, a “good” ship model being expected to show every screw and rivet, even where it was impossible to produce this truly to scale. Sadly the effect of doing this could be  distortion and a loss of the viewer’s ability to appreciate form.

Recently a young pretender emerged in the form of Virtual Reality.  But this has some major shortcomings. Interfacing with the world via a screen or visor though impressive, even useful in some applications, has distinct limitations.

A physical model is passive until the viewer approaches it, then without any need for intervening technology he starts to explore the subject, to engage with it on his own terms. Every child will start to examine some new object not just visually but with the fingers, the sense of touch adding another perspective to understanding. Adults do not lose the urge to reach out and feel even the most delicate detail, so sadly many models have to be protected behind glass.

We felt that we had to have a physical, rather than a virtual, model and wanted something that would demonstrate the best that can be achieved with current technologies.

The search for a modeller who would deliver on time to the finest quality was simplified by the discovery that James Pierce of Ambleside had recently acquired Russian in-laws and was likely to be favourably disposed towards the idea. 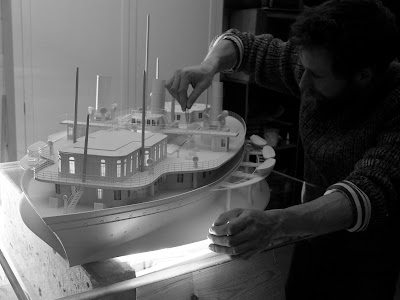 James studied at Lancaster College of Art and graduated with First Class Honours in Modelmaking for Design & Media from the Bournemouth Arts Institute.  After brief periods with Dyson and the architectural model maker Threadgill  in London he headed back north bringing with him hands-on experience of the latest materials and computer aided machining techniques.  But, perhaps most importantly a fresh approach to model making, a sense of theatre.

Ten years ago he became a partner in a Cumbrian company. Initially the firm built full-sized yachts, moving later to become established as  a world-leading manufacturer of ship and yacht research models. In 1995 & 2000 they contributed to the success of New Zealand’s America’s Cup victory and numerous super-yachts, after which building ‘real’ yachts fell by the wayside to concentrate on research and concept modelmaking.

With towing tank models the emphasis has to be on accuracy, but concept models primarily require inspiration to make a project come to life. Such models are the client’s first tangible, physical link with a new ship or super yacht design. The excitement of everyone involved is at quite a different level, way above viewing a set of drawings or a computer animation. The project is coming to life. Model making is no longer a technical skill, it is elevated to an art form.
It is interesting to compare the 1880 Livadia model at the Riverside Museum with James’s 2016 interpretation. Having engaged the onlooker without blinding him with an excess of detail a thousand questions are posed, the perfect way to start a new conversation.

All images courtesy of James and Richard Pierce  http://jamesfranklinpierce.weebly.com/