On the weekend of 23th to 25th June 2006 the Royal Highland Yacht Club celebrated its 125th anniversary with a pursuit race.


The forecast was pretty good, offering a grey day with light Southwesterlies on the Friday, followed by a brighter Saturday with a very light Westerly wind and a sunny Sunday with a stronger Northwest wind. At least this suggested we should be able to get back home on the Sunday.
John Wilson agreed to come along and brought his dog Ben to keep Anne company at home.


On the Friday we set off at midday, there being no point in too early a start as there would be plenty of tide to get us to Pulldoran. John helmed us down to Ardluing buoy, which we cleared at 14.00. Out there we found a Southwesterly of about Force 3, which gradually increased as the day went on. We had a fast reach down past Easdale, by which time the weather had cleared up and there was a wonderful view of the hills of Mull and the mainland.
Eilean Dun was dead down-wind and we had to gybe several times as the wind shifted. Martyn had left later on Shona, but had gone through Cuan, so was in front and called to say there were about sixteen masts visible at Pulldoran. At midsummer it fills up rapidly and there were to be about twenty boats there when we arrived.
In the lee of Eilean Dun we got the jib down and stowed and the anchor and chain up on deck. I always use a Bruce nowadays with a short piece of heavy chain and a nylon warp, because it is fine in places like Pulldoran where you know the bottom is mud and there is so much traffic hardly any weed grows.
The Islanders are great tacking into a tight spot under main alone. I sheet in the main, set up both runners and Stroma works her way gently up wind, tacking without needing to do anything other than steer. It was amusing to see someone getting fenders out when we came up quite close under his counter.
We tacked up near to the head of the bay and anchored about twenty metres off the islands, next to Shona. A beautiful Arthur Robb designed 56 foot yawl lay quite near, the Rob Roy, flying the Virgin Islands flag, a very romantic sight indeed. Her owners Dave and Tricia were having a cruise in British waters to celebrate their ship's fiftieth birthday.
We had our dinner aboard and later walked over to the Tigh an Truish, where we had a few pints of Somerled. It's a great old inn and a very good reason to anchor in Pulldoran.
Saturday was a very bright morning with a gentle South-westerly breeze, a much better day then forecast. As our start was not until 12.08 in Oban we spent plenty of time stowing things, got the anchor up about 10.30 and spent most of the reach into Oban cleaning off the mud that Pulldoran is famous for.
We arrived in time to check the time signal on the Commodore boat Bandit. In a pursuit race the slowest boats start first, the idea being that everyone arrives at the finish line together. The Bandit was firing a gun every ten minutes, sounding a long blast every five and a short one every minute, making timing your start very easy.
The bay was pretty full of boats and a fantastic sight. Stroma wasn't the oldest boat there, as the Elk is over a hundred. I remember seeing her on the shore near the Brandystone in the early seventies, an abandoned hulk. It's an incredible credit to Alex McRae that he's got her into first class condition. As you will see her crew dress the part too. 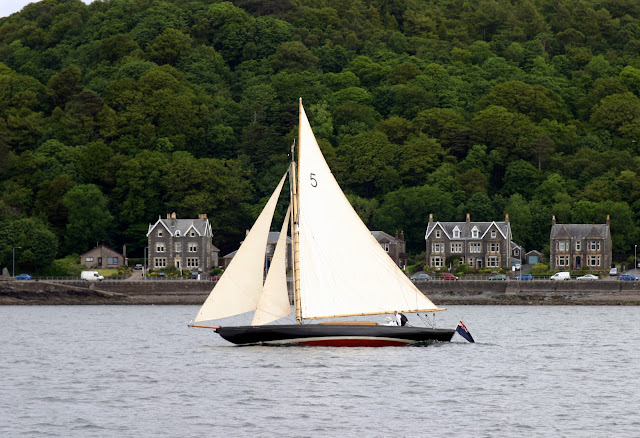 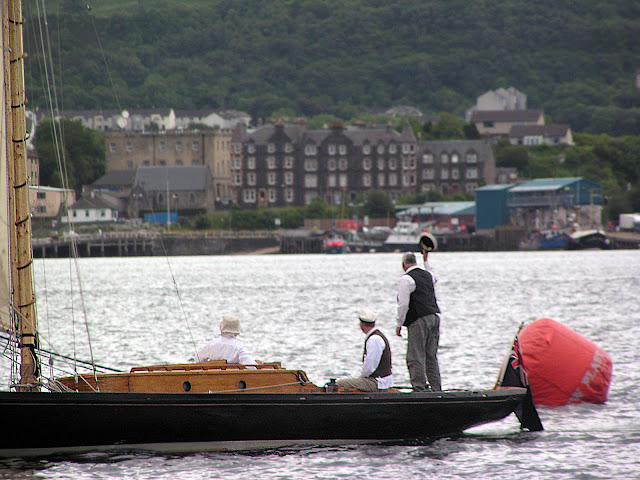 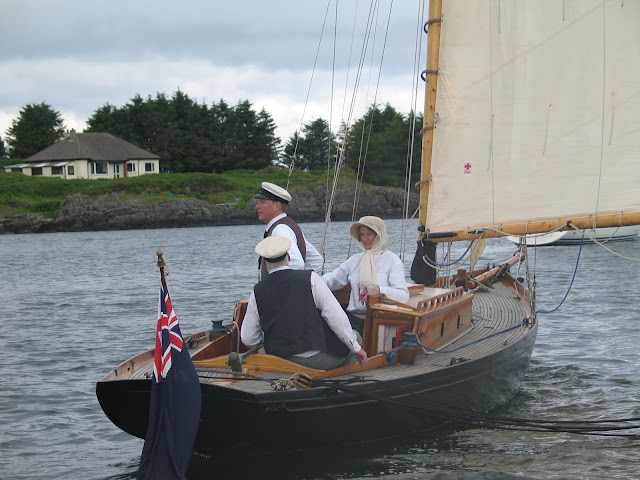 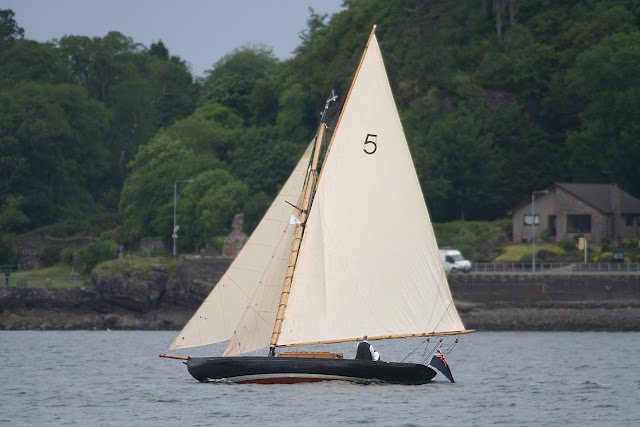 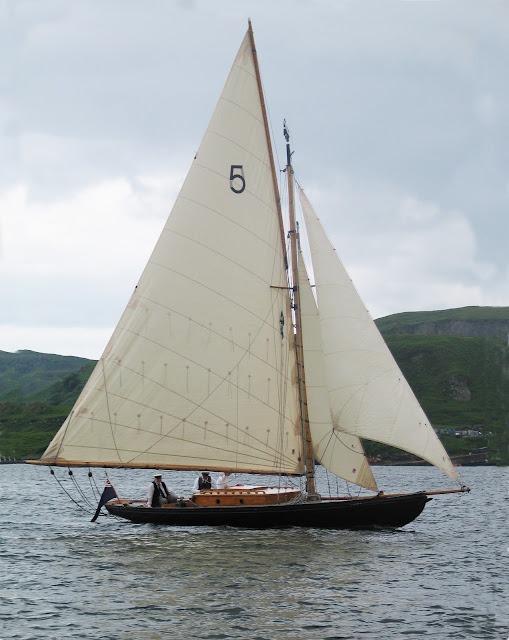 The crew of Shona were dressed the part too, with their Tammies. 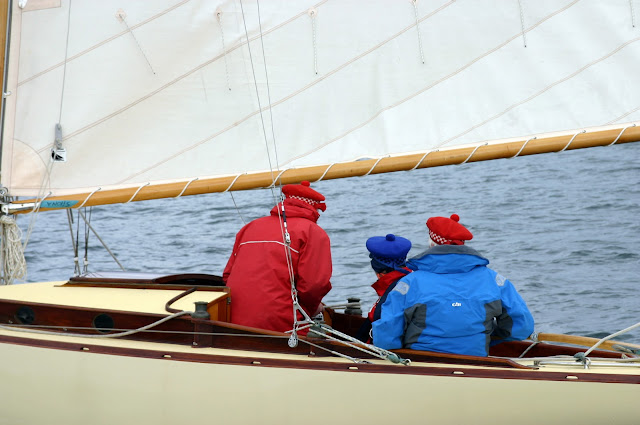 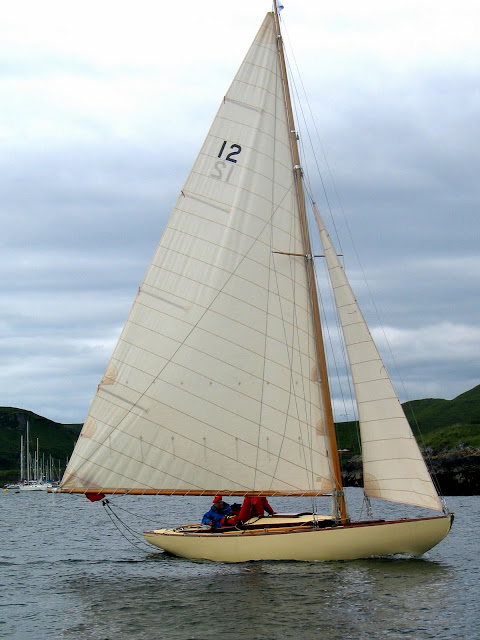 Because of the crowd we were a couple of minutes late at the start, which gave the Shona a good lead. Paddy Shaw in Canna was well behind, having had to come down from Loch Etive and arriving a bit late to get into the starting sequence.

The course was the one from the 1898 race, North out of Oban Bay, across to Port Donain on Mull, round Bach Island to port then up the Sound of Kerrera to finish back in the bay.

Once clear of the bay we were closehauled on port tack in a wind which had increased a bit since the morning, ideal weather for the Islanders. The main problem was getting clear of the dirty wind from the slower boats ahead, requiring us to sail free under their lees and then make up the ground lost later by sailing faster. Shona was sitting on top of us and it seemed we would never get out of her wind shadow. I got the impression the two boats are now exactly equal in boat speed on the beat. We were still in her shadow when the fleet went about and sailed back towards Kerrera on the next tack.

The Port Donain mark was very difficult to spot and I only saw it when Shona went about. I thought Martyn had slightly underestimated for the North-going tide and stood on a bit more before doing our tack. This paid off because Shona had to sail close inshore at Mull and got caught in the ferocious tide that flows like a river up to Duart Point. As a result we cleared the mark about twenty yards ahead.

I then realised to my astonishment that only the Hot Toddy was in front of us, a very well-crewed boat from Oban Sailing Club, flying a big genoa. To pass her we had to work our way up to windward of her and then reach down to blanket her wind, which took an anxious twenty minutes or so. Then we were reaching across to Bach Island in a good breeze. 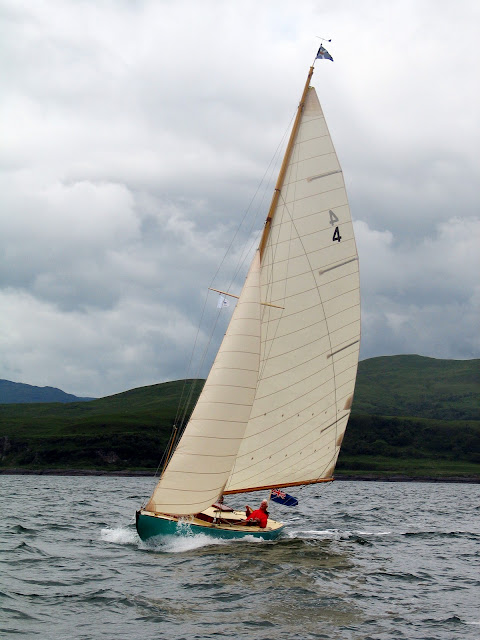 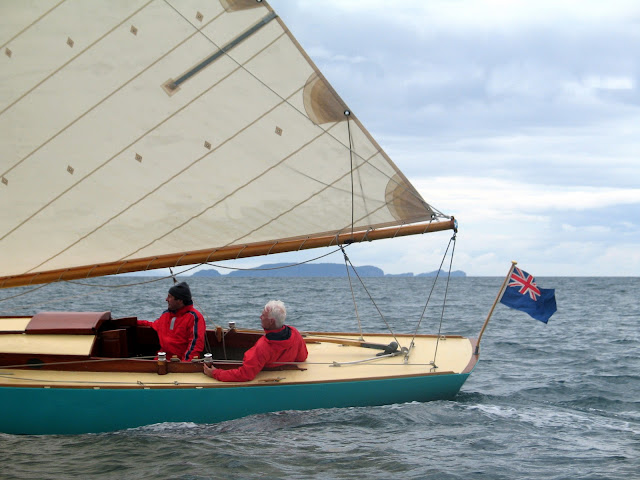 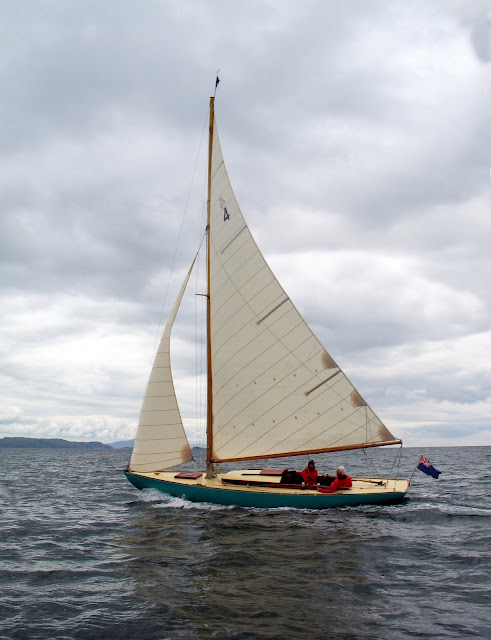 The Islanders are great reaching, thanks to the big main-sail and we were able to draw a bit further ahead and had a good lead by the time we turned into the Sound for the run home. This was quite stressful, because the boats behind were now blanketing us and the wind is always flukey in the Sound. I was worried that Hot Toddy would use some local knowledge to find a way past us. We had a bit of by-the-lee sailing to clear the Ferry Rocks buoy and were finally clear to sail for the line.


The wind shifted a bit at the very end and we gybed just before the finish. It was nice to hear the gun and lots of hooting from the Rob Roys, who were anchored at Ardentraive Bay to watch the finish. Our course time was three hours and a minute.

We had a nice sail up to Dunstaffnage and had booked a visitors mooring, so were soon enjoying our dinner with Paddy, who had anchored alongside us. Later we went ashore and found that we had actually beaten sixtytwo other boats. We enjoyed the party at the marina, but were glad to turn in for a quiet night. 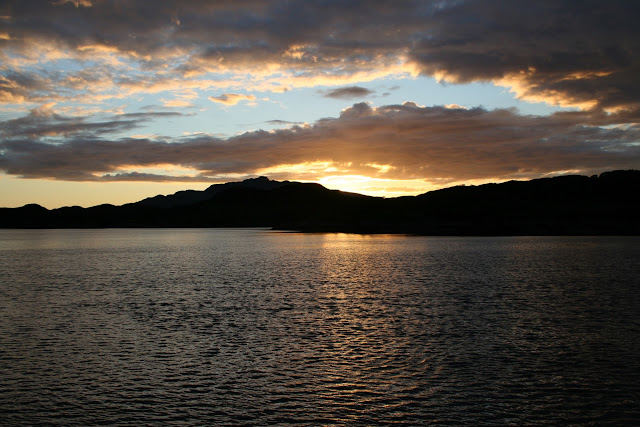 On Sunday morning we were up at five to a lovely bright day without a breath of wind. I decided to set off reasonably early to use the morning ebb tide and thought we would probably have to use the evening one as well to get home. We helped Stroma along with the paddles to get out of Dunstaffnage bay, helped by the tide sweeping round clockwise and round the South side of the entrance. After a couple of hours we had covered about one and a half miles, then spotted a really brisk breeze to the westwards. It took ages to drift across to it, always apprehensive that it would evaporate, but eventually we made it. We had a really fast run down past Bach Island and the Dubh Skeir and I though we might even get down to Ardluing before the tide turned. Then the wind gradually lessened and we were still a couple of miles from Seil when the tide turned. To stay out of the main stream I sailed across to the Seil shore, then ran down very slowly into Easdale, where we anchored off the Stone Wharf at 14.30. We had soup followed by strawberries and a couple of glasses of wine while waiting for the tide.

According to the tables the tide at Cuan would turn in our favour at a quarter to five, so we left an hour before then and just managed to stem the last of the North-going stream.

We were a little early at Cuan and ended up on the Seil side of the entrance, which was a mistake. Once we were in the Sound the wind was of course negatived by the stream so there was no way to steer. There were some powerful motor boats playing about in the Sound and cutting in and out of the whirlpools. One of them turned very near to us and her wash caught Stroma's bow, turning her round to face back where she came from. We were then drifting backwards in the tide, getting ever closer to the Seil shore and unable to steer. There's a little bay just South of the ferry pier and when we got there we had just enough way on to sail in, gybe round and come out going forwards once again.  In a few seconds we were back in the stream and under control.

We then had a gentle run down to Degnish Point and drifted up Loch Melfort as it started to rain and there was very little wind. Just when we were getting cold and depressed a gentle Northerly breeze came up and took us to the entrance to the Yacht Haven. Finally the wind died completely and we finished the day's journey as it had begun, shoving Stroma along with a paddle. We were on the mooring at 20.00, just over twelve hours after we had left Dunstaffnage.
Posted by Ewan at 08:48