The West of Scotland in the late 1880s saw the emergence of both (one of) the first one design class(es) in the world and a challenging set of rules for a pure development class. There's a lot to be said for each side in the one-design versus development class issue and each will have its adherents. The former produces keener helmsmen and crews, while the latter allows the sport to move on.
In 1886 the Clyde Canoe & Lugsail Club commissioned the legendary designer George Lennox Watson, then in his prime, to produce a small one-design yacht, of which three were built by R McAlister and Son at Sandpoint, Dumbarton and named Red, White and Blue. Another three were built the following year and a final one in 1888. I am aware that the Dublin Water Wags are also contenders for the title of first ever one-designs, being first proposed by Thomas B Middleton in September 1886. The first boat, the Eva,  based on Mr Middleon's model, was built for him by the aforesaid McAlisters. In the interests of Celtic peace and harmony and the absence of further evidence we should declare a dead heat, hence the use of brackets above.
I haven't yet found any photographs of the Clyde boats, but here are the profile and sailplan drawings. 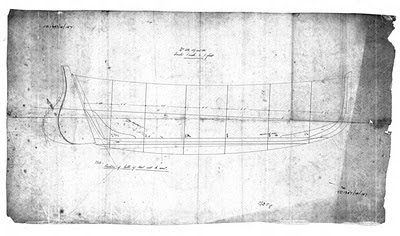 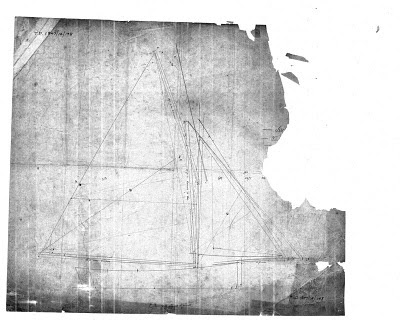 The one designs were a reaction to racing rules which encouraged rule-beaters, sometimes producing unseaworthy boats which were quickly outdated. There was also a lot of hostility to the Yacht Racing Association, which many saw as seeking to impose ideas worked out in the South of England on areas such as the Firth of Clyde with its choppy conditions and deep water, which for example made centre-boards or "shifting keels" unnecessary.
However the desire to innovate remained and a small development class would allow designers to experiment without any disasters being too expensive. The result was a set of rules for a new Clyde 17/19 foot class. Basically yachts were to be 17 feet on the waterline, 19 feet overall and with a sail area not exceeding 530 square feet.
The 17/19s emerged no later than 1888, when they are mentioned for the first time in the records of the Royal Western Yacht Club, but they may have been around for a couple of years by then. The Watson design no 108 of 1886 is for the Mollie, described as a "17 ft Clyde Class" for P R McLean, whom I understand would have been her builder. In 1887 William Fife III designed the Nellie for K M Clark of Wemyss Bay.
1888 saw Fife designing Caprice for R M Donaldson, Nellie Too for Mr Clark and Dorothy for John Tennant and Watson designing Nell, a "19 ft Lug" for N B Stewart Junior and in 1889 J, or Lapwing for Mr E S Parker of Fairlie.
In 1890 Watson followed with Bandersnatch, or Harlequin for Dr Robinson.

In 1892 arrived Fife's Katydid for P P Nicholl and Watson's Cutty Sark for E C Richardson and an unnamed yacht for A Logan.

1894 saw the largest number of recruits to the class but also sowed the seed of its eventual disbandment. Fife produced Hatasoo for Andrew Bain, while Watson designed Daisy Bell for A Scott, Pirouette for C A Nicholl and Olea for James Thomson Tullis.
The last boat to join the class was Fife's Fricka of 1896, being a close sister of Hatasoo. By this time Hatasoo was proving unbeatable, having won 100 flags in 113 starts. She was something of a skimming dish design and today looks incredibly modern.
It was felt that Hatasoo represented the reductio ad absurdum. The boats were extremely wet and potentially dangerous. Thus 1896 also saw a conference of the Clyde clubs resulting in a commission to Fife and Watson jointly to produce a set of rules for a larger and more seaworthy class. The result, the 19/24s, have their own website here.
The new class saw orders going for the first time to Alfred Mylne, who had left Watson that year and set up his own design office. One of his clients was John Keil Tullis, James' brother. In fact Mylne designed most of the new boats, with Fife coming second, and a handful by Linton Hope and Peter Mclean. I'm intrigued that Watson did not design any of the 19/24s. Was this due to a lack of clients or a deliberate decision on his part?
There have been suggestions of bad feeling between Watson and Mylne following the latter's sudden departure, but I would like to think these have been exaggerated. Watson would have naturally resented the loss of a talented protégé at a time when his office was extremely busy, producing a new design on average every 3 1/2 weeks, pressure that would lead to his death in 1904 at 51 years of age. The two men were also somewhat different in temperament, Mylne being rather more relaxed and social, I suspect, than the more formal older man. But surely they would have both been too busy to bother with grudges?
Rather than Mylne chasing after clients I think it's more likely that Watson just left the field to him. He had no need to experiment further with design and was working on major projects, with a clear preference for commercial ships and lifeboats rather than yachts, which he regarded as frivolous. There would have been an ethical dimension too. Earlier in his career he had accepted for a time appointment as the official measurer for the YRA rules, but when he began to receive commissions for yachts done in terms of those rules he promptly resigned. He may have felt that having been an author of the rules for the 19/24s it was better to preserve his independence, possibly in order that he could be available in the event of a disputed interpretation.


A yachting journalist from the deep South asked Ronnie McGrouther when he was going to restore Hatasoo and he replied "We gave her a new transom fifty years ago, what more do you think she needs?"
Posted by Ewan at 07:01