My yellow boat, the Kelpie, is a Christmas Wherry designed by Walt Simmons of Duck Trap Woodworking in Maine. She's by far the most versatile and sea-worthy little vessel for her size that I have ever come across.
I discovered Walt's designs in the pages of Woodenboat around 1979, when an article about his Newfoundland Trap Skiff appeared. She looked utterly nostalgic with her shapely hull - a lovely transom and perfect sheerline, but far too big and complicated for the resources and skills available to me at that time. Instead I went on dreaming for a few years before starting my career as an amateur wood-boat builder with the Nutshell, about which I raved in a previous post. Our American friends have certainly got the knack of drawing pretty boats, although Walt admits that he draws heavily on old English designs that went West with the Pilgrim Fathers.
When the design for the Christmas Wherry appeared I felt that she was just about right for my purposes, something small enough for me to handle easily out of the water and launch and sail easily and safely, whether single-handed or with a couple of friends. I duly got the drawings and built her in about a year of leisurely weekend work, putting on a couple of planks when the weather wasn't right for sailing. 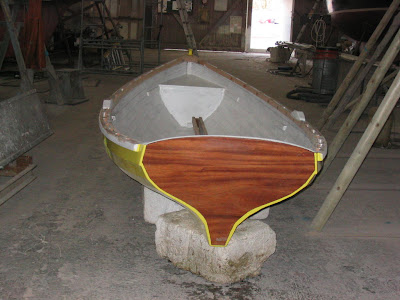 I kept strictly to the lines drawn by Walt, but departed from his specifications in a number of details. I had some experience of glued clinker planking with the Swampscott dory I built  some years before and also seeing some of Iain Oughtred's designs in action. These boats hang together without frames, because you get an incredibly strong girder effect from the laps. Accordingly I built the wherry without frames, but used good quality 9mm ply and increased the lap width to a full inch (sorry I'm one of those transitional types that's part metric, part imperial). I also built buoyancy tanks into the ends, just in case we got swamped.
Instead of the recommended lug rig I decided to use a sprit-sail that I had got made for the Swampscott and retained when I passed her on. This is a beautifully cut sail of only 70 square feet, so it was interesting to see how it would drive the wherry. In the event it had plenty of power, but the boat was quite impossible to steer and we needed to get the oars out to put her about. Also in any kind of wind we made terrible leeway and ended up miles behind our friends heading for the annual picnic on Right Island.
As usual when I have a problem I called in Richard Pierce. He explained that a sprit sail gives most of its drive close to the leading edge, whereas the lug sail drives from further back. Thus the relative position of the sail and the centreboard was quite wrong, resulting in dreadful lee helm. We shored up the wherry and he took photographs, which he then digitised against the sail plan of his own highly successful Sciurus. Here is the result:- 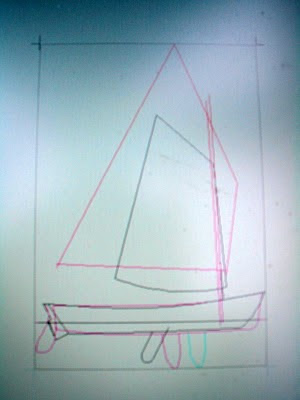 Kelpie is shown in black and Sciurus in red. Richard's advice was to move the board to the position indicated in blue. In making this modification I decided to replace the centreboard with a daggerboard, gaining a keener leading edge and some more internal space. In our waters it's pretty deep until you're almost on shore, so the daggerboard isn't too much of a problem. The new board is a hydrodymanic shape, which I also copied from Richard's boat.

The modification was a great success and Kelpie proved a fun boat to sail, especially in strong winds. This led to a further modification, because I originally built the rudder to be steered by a yolk, on the theory that this could be useful when single-handed. In the event it proved incredibly hard work and I was quite pleased when we broke the rudder one day, with four of us aboard in a force five. The new rudder has a lifting, hydrodynamic blade and a sturdy oak tiller. 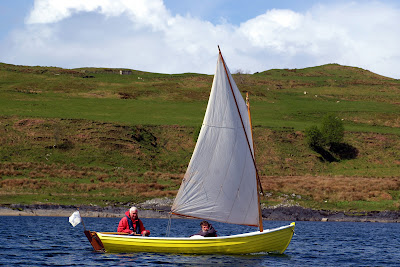 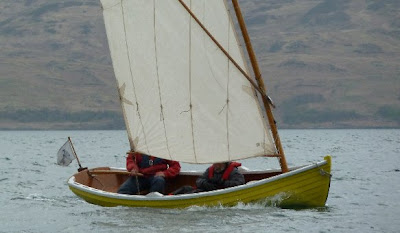 For anyone interested in building the wherry the "easy" way, I noticed recently that Alex Jordan is now producing a kit of parts. He can be found at www.jordanboats.co.uk
Posted by Ewan at 09:10