Another Westra and a little more local history 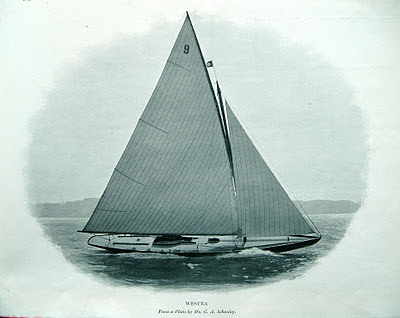 Gisela Scharbaum recently sent me this image of another Westra, from the Royal Northern & Clyde collection, and asked if I could help to identify her. A quick trawl through the internet showed that she was the second of two raters of that name drawn and built by the genius of skimming-dish design, Charles Sibbick of Cowes.

The Charles Sibbick Interest Association have kindly allowed me to share the following notes, which they sent following my request for information:-

"First of all there is no known official registry of Sibbick Boat Plans/Drawings and not even a list of the building numbers of his boats.

However, we have managed to trace  the names of nearly 300 of his boats with type and building year. We have spent some years on this. We know for a fact that he built over 300 boats until his death in 1912. There are also some enthusiasts, not so many, but are really into Charles Sibbick. We are all sitting with variable information from different sources. There are probably some boat plans in private ownership here and there. We have a lot but unfortunately none of Westra which was originally a 5 Rater measured over to 36ft Linear Rater in 1897. At the time her rig was altered from a Sloop to a Cutter and Jib and Bowsprit were fitted to her. The reason for the change was probably for Westra to fit in with the First Linear Rater. She was, as most of Sibbicks boats, extremely fast and was mentioned in several articles in the New York Times in 1896 and 1897.

N.B. There was also another Sibbick Rater called "Westra" but that was originally a one Rater, later converted to a 24ft Linear Rater.

What has happened to Westra, we are not sure about but when the International Rule came in 1906/1907 several Sibbick boats were measured over to fit the new formula for example 8mR.

We know for a fact that Sibbick was still registered as a Naval Architect with the address on Albert Yard , Cowes in 1905 and he continued building and repairing yachts, although not in such a large scale, but he had from time to time financial problems and the International Linear Rating Rule obviously caused him major problems, even if the new rule was not especially popular in the UK at the beginning. It was mostly in Scandinavia where those boats became extremely popular at once.

Sibbick had a lot of influence and was building a huge amount of boats, one designs and restricted classes for Europe and the United States and many other parts of the world. He was still active until his tragic death in 1912. (comment from me - It seems that Charles Sibbick eventually became depressed and drowned himself)

We can also tell you that J C Connell of Glasgow put his boat Westra, who was champion of the season, up for sale in 1897. Westra finished the season with the biggest record of a class and an explanation from Mr Connell was awaited as to why he was selling his boat!"

John C Connell was a member of the famous family of Glasgow shipbuilders of that name. When he owned Westra he was in his early twenties, so she was rather a nice plaything for him. That she had no accomodation would not have troubled him unduly, as the records show that in 1895 the family firm built two steam yachts for their own use, SS Moneira and SS Athene. I haven't found details of the Athene, but the Moneira was eightyfive feet long, of 57 gross tons and her build cost was £2,150, information courtesy of http://www.clydebuiltships.co.uk

Charles Connell & Company was founded by John's father in 1861, when he resigned from his post as head foreman shipwright and latterly yard manager at Alexander Stephen & Sons of Linthouse. The Stephen company history records:- It is amusing to find that although Alexander Stephen, commenting on Connell's resignation, writes: "I do not think he will succeed," a pencilled note on the opposite page, inserted many years later, states that "Connell died in 1898 leaving over £300,000."

Actually Connell died on 14th February 1884 at his home in Broomhill Avenue in Partick, leaving an estate in excess of £250,000 and a well-founded shipbuilding concern. His eldest son, Charles B. Connell, succeeded his father and ran the yard with various brothers and half-brothers.

The family were close and built themselves a twenty two-roomed villa, Caol Ruadh, at Colintraive near to the Kyles of Bute Narrows, absolutely in the centre of Clyde yachting. Here is their 1901Census entry:-

You can see that brothers William, John and Arthur are described as shipbuilders, while younger brother Allan is "living on own means" and they have a butler, a valet, a cook and three domestic servants. The family gamekeeper Alexander Gillies lives next door in a one room cottage.


The 1911 Census shows John C Connell aged 42 and his brother William C S Connell aged 47 both living at Carston House, Ayr with their (half?) brother Alfred H Connell, aged 30, Alfred’s Irish wife, a valet, a groom, a cook, two housemaids and a French maid. Alfred was at the time an officer in the Royal Scots Fusiliers. John and William are both shipbuilders and employers. Later on Alfred became a ship owner and broker in Liverpool. He seems mainly to have owned small tramp steamers.


The development of Scotland’s heavy coal and steel industries and the ship-building industry that followed created astonishing opportunities for people with skills and initiative. It also created conditions of enormous inequality between the workers and the bosses. Tens of thousands of workers lived in crowded tenement flats within walking distance of the yards, where they toiled in the open for slave wages, regardless of weather. From my own childhood in the west end I remember the distant noise of battering as millions of rivets were banged home, throughout the daylight hours. The contrast beween these conditions and the lifestyle of the Connells could not be more stark.


There is a good website with information on the old Clyde yards here:- http://www.clydemaritime.co.uk It reports that:-

The last ship built at the Scotstoun Yard under Connell family management was the 12,011 tons cargo liner BENSTAC for the Ben Line of Leith, which was launched on 20th of November 1967 and completed in the spring of 1968. The Connell family, however, remained in business as Ship-Owners and Ship-Managers.

The Connells were regarded as one of the superior shipbuilding families of the many Clyde based shipbuilders, introducing many new techniques and investing their private wealth back into the business. More than most, Connell saw the benefits of maximising on standard production and prefabrication techniques, and were leaders in pioneering these new methods.

The fast cargo-liners produced by Connell for the Ben Line of Leith were regarded as amongst the finest examples of this Yard’s superiority in designing the best ships to fly the Red Duster of the British Merchant Navy, setting standards of excellence in naval architecture that were emulated throughout the international maritime world.

Arthur died at Dougalston in May 1949 aged 77, having been Connell’s chairman since 1937. He had been a member of the Thistle syndicate 6 metre yacht for the  Seawanhaka Cup but she wasn’t ready in time and didn’t compete. He had owned or part owned six twelve metre yachts.

If we add in Herbert Thom's famous Westra, about which you can read elsewhere on this blog and on http://www.scottishislandsclass.blogspot.com we've now traced four Westras, none of which still exists, the Twelve and the Islander having been destroyed during the War.
Posted by Ewan at 07:01