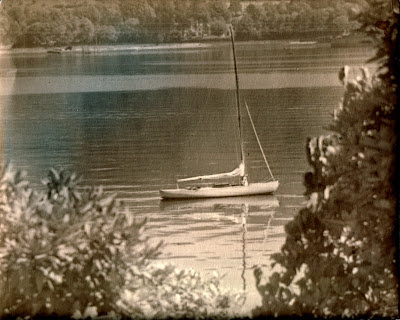 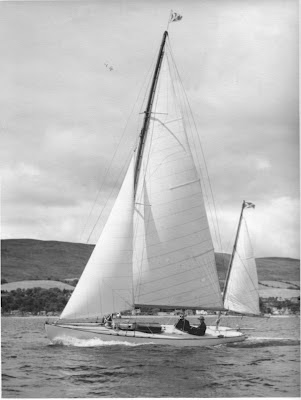 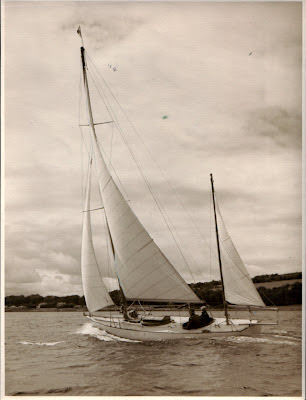 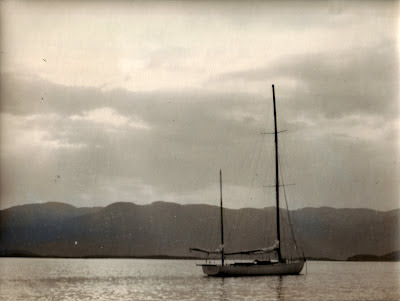 The first scottishboating mystery yacht remains unidentified after more than a year, so let's have another go with a new one. Peter has sent in the images above, which show a yacht with a number of interesting and puzzling features.

The photos were all taken by the famous Scottish photographer Ian G Gilchrist, who published a couple of fine books of images, Call of the Wind and Scenes and Sails on the Firth of Clyde under his Windward Publications imprint. From the general style I guess that the pictures above are pre-War, when Ian was in his prime.

The pictures show a hull form that would have been unusual in the 1930s with short ends and what appears to be a flat run aft, possibly suggesting a fin keel.

Image one shows a fractional sloop rig and a mast that has suffered a bit through backstay tensioning, whereas in the other images she has sprouted a mizzen.

Was she designed as a racing yacht, perhaps by her owner anxious to prove a theory and later converted for cruising? There is a clue suggesting that this might be the case in that she seems to have had originally two circular cockpits for safety reasons in the style of many of the early extreme racers, the foredeck hand nipping out of the forward one when required while the helmsman aft concentrated on cerebral work unhindered.

The pictures of her in cruising set-up suggest a very cosy cockpit arrangement, particularly if you invited any guests along.

It's difficult to imagine what life would have been like down below, rather claustrophobic I guess.

An anchor windlass worthy of a Titan appears in all the pictures, suggesting that the owner was a cautious chap. It certainly wouldn't have helped while racing.

And how on Earth was she steered? There's no sign on deck of a tiller, or indeed a rudder.

I'm also intrigued about the locations.

Picture 1 with rhododendrons and a big hoose in the background suggests the Kyles of Bute.

Pictures 2 and 3 again too civilised for the West coast with houses along the shore and cultivated fields, so probably the Firth of Clyde again?

For my money picture 4 is outside Crinan.

Finally a few words about the photographer. Ian Gilchrist was married to Gladys Murison Coulson, who had acquired the lovely Mylne yacht Maid of Lorn as a twenty-first birthday present in 1933 and they lived at Kilcreggan, where he established his Windward Publications imprint. Many of the photographs in his books were taken from the Maid or feature her. She was built by McKellar's slip at Kilcreggan in 1908 with a transom stern and lengthened a year later. She's still going strong and won the beauty prize at the last Mylne Regatta. Here's an image of her, courtesy of the lovely blog lochielbute 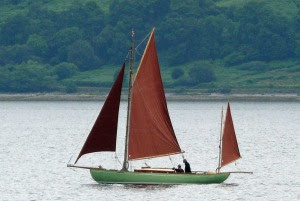 I would love to know more about the Gilchrists and maybe someone reading this will have known them. They retired to St Andrews, where Ian died in 1974 followed by Gladys in 1988. It would be good to know that Ian's photographic archive has been preserved.