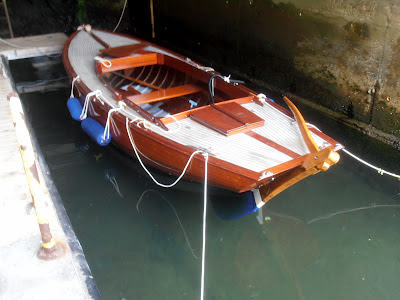 Juni is a masterwork of Swedish boat carpentry, her hull planked close-seam from a hard close-grained mahogany, no caulking, no splines and, I suspect no glue either. This has its problems in a little ship that’s forty years old and has obviously been through a few escapades.
Doing the repairs was rather nerve-wracking, as I am no cabinet-maker. There were some strategic decisions to be made, as I wanted to respect the skills with which the boat had been made while ending up with a seaworthy, useable vessel. That the construction was so fine ruled out some of the more robust approaches which would have guaranteed keeping the water out. Among other things I’ve had to fix some nasty splits in a few of her bottom planks, clinkering between some of the others and quite a few broken timbers, all as unobtrusively as possible.
As a result of this approach it was no surprise, just a bit upsetting, to find Juni weeping rather badly on being returned to her element after about ten years ashore, the last seven inside a shed.
This is where the surrinduppity (I’ve adopted the Brother’s spelling) comes in. If we were dealing with an old loch boat, her boat-skin planked in good Scottish larch, we’d just secure her with some stones and leave her sunk for a few days. With a close-planked hull of fine hardwood and a ballast keel this is not a good idea. The ideal would be a nice soft mud-berth, but Argyll isn’t Essex and the shores here are sharp and rocky.
Salvation was found literally round the corner from where we launched, at the Melfort Pier, a luxury holiday complex whose houses circle a calm private dock and whose owners love boats, or at least lovely little ones like Juni. Under one of the houses we found the ideal sick bay, a secluded berth just wide enough and with fixing points for the long diagonal warps that are necessary to cope with the rise and fall of the tide. 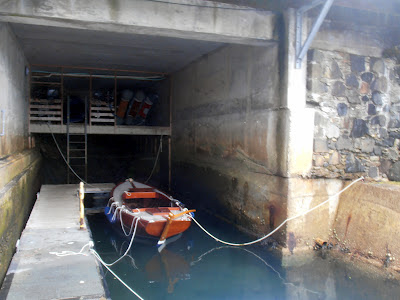 For the first couple of days I was pumping every six hours or so, but six days after launching things are getting better. I’m down to pumping every twelve hours and it will be interesting to see if and when there is any further improvement, or if she has to come out again for further treatment. That the hull is from a hard, close-grained timber is not helping, nor is the fact that she is now so well protected by all the paint I have put on, so I’m living in hope.
Posted by Ewan at 06:52