As is well known, the good people of the Slate Islands have a reputation for the utmost integrity. Never in their history have the residents of Easdale, Seil or Luing even contemplated taking an unfair advantage, not only in their working lives but also in their moments of leisure and recreation.

For example it’s well known that when the sailing ship Norval struck the South end of nearby Insch on 20 December 1870 and broke up a fortnight later, not a single match-stick from her a cargo of fine Canadian housebuilding timber found its way into any of the residents’ modest cottages. You can read the story here, Report from Easdale

Now, one and a half centuries later, the islanders have been presented with a moral dilemma and like their forebears have decided to close their ears to the sea-nymph’s call. 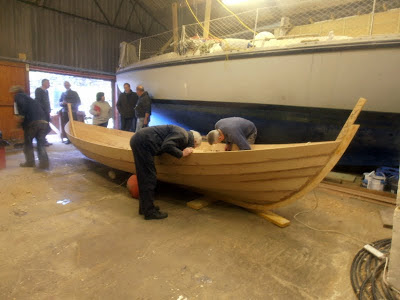 The weekend just passed saw the island residents turning over the Seil Skiff, one of the latest additions to the growing Scottish Coastal Rowing fleet . The build is of course nowhere near finished, but we’ve got a lovely fair hull and know for sure that we’ve got a great foundation to  build on. More important for those of a competitive nature is the simple fact that fairness and smoothness of line are essentials for a fast boat, as the less disturbance caused the better. This much is plain to a layman like me, but other aspects are less obvious.

The moral issues have come as the building work has proceeded. Everyone knows that boat-building is at least 90% sandpapering and doing mindless work as a group allows time for discussion. On Seil our team includes a diverse range of talent with a heavy emphasis on science, engineering and design.  Coming as I do from the law’s dusty purlieus I have been able to contribute nothing, but have listened as various potential contributors to boat speed and manoeuvrability have been analysed.

I’m not going into too much detail unless I give people ideas, but it’s relevant to share the exchange of emails I’ve had with two of the main people in the project

Ewan’s email to Topher and Robbie

“There are a few practical matters that I'd like to run past you …. It seems that rudder design is uncontrolled and we are free to plan what we want in terms of the size, shape and angle of incidence of the rudder blade.  It also seems that there's no problem with an open inwhale, which we see in the photos of other boats and would like to adopt.     We're considering moving the thwart positions a wee bit forward, as we see that some skiffs are squatting especially when they have a heavy cox aboard. I think some teams have done this already. Finally I'm thinking of introducing a small amount of rocker, possibly reducing the depth of the external keel at the ends by an inch or so from Iain's construction drawing. It's difficult to be sure from the photos online, but it looks as if there are some variations already in keel profile.”

“Well done for getting the planking finished, and I look forward to seeing the finished boat. The rudder does seem to be as you say, uncontrolled, and there are many variations on a theme. Slotted gunwales are also OK and we have gone down that route (without reducing weight) for reasons of strength and drainage.  If you move the thwarts my advice would be to keep the number 3 seat centred on the frame, move the stroke seat 2 inches aft, number 2 seat 2 inches forward and the bow seat 4 inches forward, thus increasing the space for each rower by 2 inches and moving the rowers forward, on average, by an inch. We did this on our second boat and so did the Sailing club here. Although oars are many and varied, a consensus does seem to be forming that the oars are better restrained in some way from floating in or out at the oarlock. My advice which you are well experienced enough to ignore would be to make the cheap oars on the oar tab of the SCRA website, and then using those as a datum make better ones when you know what you want. I'd be a bit uneasy about introducing rocker or reducing the outboard part of the keel, because of the advantages to speed and turning which this departure from the plans would introduce. I'm aware as I write this that the same could be said of changing the seat spacing or fiddling with the rudder, but somehow the outside of the hull is sacrosanct, and I would not like to see people cutting their outside keels down to reduce drag. As you say this may already be happening and so far we have not done anything about it, but it could get out of hand. We may have to issue guidance on this, what do you think, Robbie?”

“Agree absolutely with Topher.  In the measurement rules there is a difference between hulls and fittings (including thwarts).
For Hulls the rule is:

2.1 The hull is to be constructed as faithfully as possible to the St Ayles Skiff plans produced by Mr Iain Oughtred. The hull may be constructed from a kit from the approved kit supplier or may be built entirely from the plans. That to me excludes varying keel shape by introducing rocker.  For fittings the rule states:

4.1 While the plans show how Rudder, Tiller, Oarlocks, Thwarts, and Seats can be constructed, it is open to the builders to innovate and experiment with these fittings.
4.2 Oarlocks must be at the gunwale. Outriggers are not permitted.

Innovation to me includes spacing the thwarts slightly differently, and that has improved the trim of some boats.

IO introduced extra buoyancy in the hull shape after the prototype to try to sort out the fat cox problem, but the boats do still tend to sit rather heavily by the stern. It can be helped a little bit by the fat cox sitting forward to shout in the stroke's ear, rather than sitting back and relaxing.

We need to form a sub committee to review the measurement rules at some point.”

With nearly a hundred boats built or building there is definitely a need for more precise rules.

Oddly amongst the existing generalities there is one rule which is very prescriptive and has no obvious purpose, other than to challenge ingenuity. It is laid down that rowlocks must be made of timber, rather than of metal, which has been the preferred material for several hundred years. This would be understandable if the boats had to be constructed of solid timber, rather than glued plywood. Then the whole project could be seen as an historical pageant, rather than community sport.

On Seil we’re hoping that this may be something that the promised rules sub-committee will look at early on.

I am glad to read your assurance Ewan that the Slate Islanders would not dream of taking unfair advantage of any loopholes in the rules of the St Ayles Skiff. It fans the flames of patriotic pride in my country to hear of the upright probity of these new entrants to skiffdom. Nevertheless we in the SCRA will deal severely with any club found to have used helium filled plywood, and indeed have invested in a helium detector to stamp out this pernicious practice.We look forward to hosting you in Ullapool in July next year at the World Championship, and if there are any pipers or drummers in your number we especially invite them to take part in the St Ayles Skiff World Championship Pipe Band. Well done for getting to the turning over stage and enjoy the fitting out and painting. It is a great moment when you have the first row in your new boat!
Posted by Ewan at 01:45