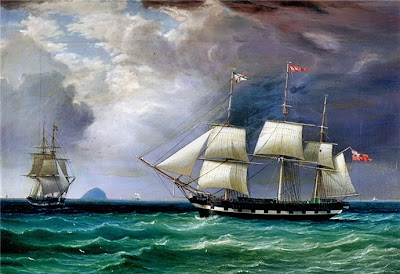 I am humbled by the fact that my blog derives as many hits from browsers looking for maritime images  as from my own efforts. Truly pictures speak a thousand words.

The late John Gardner was an inspirational fellow seaman, drinking companion, loyal and generous friend and not least one of the finest maritime artists of the last century. I publish his work with the consent of his family, as they are happy for John to be remembered and his work shared, just as he himself enjoyed it being shared through his calendars. Having said all this it’s always nice to be asked, rather than have permission taken for granted and I think it would be appropriate if anyone using an image took the time to send a wee acknowledgement to me for forwarding to the family.

John's images can be found throughout this blog, as you'll see in the list opposite.

Now, continuing my habit of getting a hurl for nothing, I’m moving back to the Nineteenth Century.

The McLean Museum in Greenock houses a treasure trove of art, much of it maritime in nature in keeping with a town that lived on shipping and shipbuilding. They include some great paintings by the town’s William Clark and I  asked the Museum for their consent to republish the following images. They’re happy, subject of course to their involvement being acknowledged. I’m adding their blog to my links list and suggest that any fellow maritime and historical bloggers should consider likewise. I hope that if you decide to republish anything you will extend this great public asset the courtesy of a similar acknowledgement. There are some very interesting articles on their blog and they deserve a lot more followers than they presently have. William Clark lived from 1803 to 1883 and so his work covered most of the Victorian age.

The image at the top of this post is of the Eldon, which I suspect was in the Australia trade around the 1840s. The first and second images below have the museum’s own captions added. Many thanks are due to the Leggy Prawn, who alerted me to the Museum's  great archive in the first place. 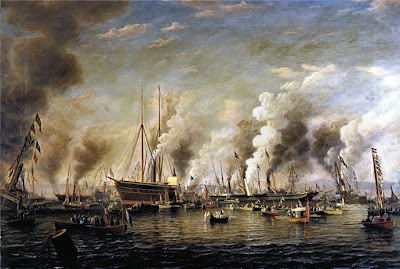 A mid nineteenth century oil painting on canvas entitled 'The Queen's Visit to the Clyde 17th August 1847' by William Clark (1803-1883), showing a view of Queen Victoria's visit to the River Clyde in 1847. The scene is on the River Clyde with a group of large and small vessels decked in flags with many smoke plumes visible. The participating vessels are left to right, Hercules, Chieftain, Fire, Queen, Conqueror, Admiral Garland, Victoria & Albert, Mars, Scourge, Undine, Fairy, Thetis, Sovereign, Premier, Craignesh Castle. Signed and dated 'W. Clark 1847' at the lower left by the artist. 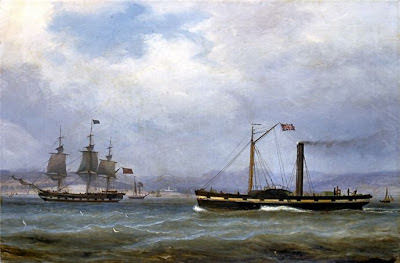 A mid nineteenth century oil painting on canvas entitled 'The Tug Conqueror' by William Clark (1803-1883), showing a scene on the River Clyde off Greenock with a wooden hulled paddle tugboat on the right and sailing vessel on the left. In the background the building popularly known as the 'Duke of Argyll's stables'. Unsigned by the artist. 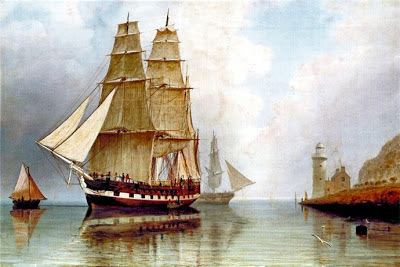 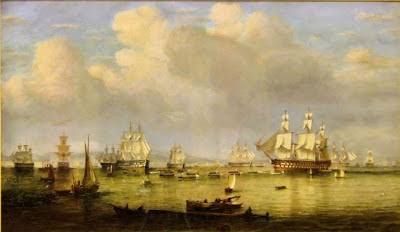