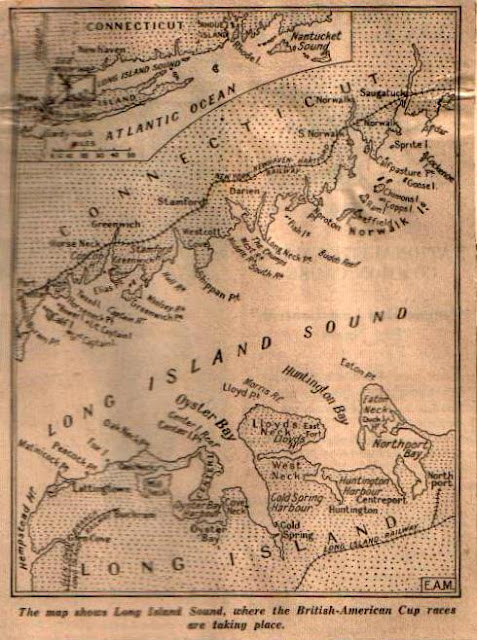 At the close of the 1933 season Willie Russell’s daughter, Udy, records in her diary,

“A definite challenge has been made by the British for the British-American Cup and the Seawanhaka Cup. It will be against the Americans and raced for at Long Island Sound. To buy, or not to buy, a Six Metre Yacht? Two new sixes are being built by Fife. One for Mr Teacher and one for Mr A S L Young. One six is being built by Mylne for Mr Clark. Daddy has decided to buy a six metre and he has ordered one from Mylne’s yard!!! Great excitement and planning for next season. I am sorry to part from Sanda as she has been faithful to the name of Russell. On this day, November the 28th 1933, we drank to the new boat, her name may be “Aline” after me or “Luinga”. But is now “Kyla” after Kyles of Bute.”

1934 would be a year of great excitement in the wider yachting circles, with the latest British challenge for the America’s Cup in Sopwith’s Endeavour going ahead against Rainbow, but at home on the Clyde the buzz was all about the new six metres; Mr Teacher’s Melita, Mr Young’s Saskia II, Mr Clark’s Volga and of course Willie Russell’s Kyla.

“On the occasion of the last contests for the two cups, which took place in 1932 in this country, the British yachts were soundly beaten. The American Jill defeated Mr John G Stephen’s Maida in the Seawanhaka races, and in the Solent four home sixes lost to the Yankee team…”

Just because you decided to build a new yacht didn’t mean you were entitled to be selected. During the summer a series of tuning up races took place on the Clyde. Yachts were divided into two teams, the reds consisting of Melita, Saskia II, Mr Clark’s older boat Vorsa and Kyla and the greens consisting of Mr Parker’s Fintra, Mr Clark’s new Volga, the Hon J P Maclay’s Susette K25 and the Donaldsons’ Maida.

Individual trials took place between pairs of boats. Melita was found to be a good boat in the light airs which could be expected off New york in late season, but was hammered by Volga in four races in strong winds. However, the latter’s three paid hands were probably a help.

The Scots duly took with them a bunch of professional skippers and paid hands, but everyone aboard Kyla for the races was amateur – Russell father, son and daughter along with Wilson Thom, who in later life helped to fuel my addiction to sailing.
Willie Russell’s daughter, Udy, a sporting heroine before her time, is an important character in our story. In May 1915 the widowed Emmeline Pankhurst adopted four orphaned war babies to add to her four surviving children, who were by then adolescent. She promptly changed their names and destroyed their birth certificates, but this was only the start of an eccentric upbringing in a somewhat colonial style with servants and frequent moves, so that the young Joan Pembridge lived at various times in Vancouver, Toronto, Bermuda and Paris. When Mrs Pankhurst died in 1928 Joan was re-adopted by Willie Russell and his wife to become Udy Russell.


Udy never spoke about her early years, but they must have contributed to the independence of mind and spirit that she later showed in yacht racing. The Express reported,

“I’m the foredeck hand” said Miss Russell. “I attend to the spinnaker, clear the jib and make myself generally useful.” “I’ve steered too, in womens races, but of course I shall not be doing that in America. That’s dad’s job.” “Do you think,” I continued, “that yachting is good sport for women?” “The best in the world,” she laughed. “But you’ve got to take it seriously. It’s no use thinking you can only go out on nice days, and sit around the deck looking smart in trousers.”

Miss Russell wears navy and white jerseys and tailored flannel skirts. The yachts leave in the Caledonia on Wednesday, 29 August while the crews follow on September 8.”

The British American Cup series was due to start on 25 September. For the passage to long Island sound, the yachts were craned onto the decks of cargo ships and the teams followed later in style on passenger steamers.

As predicted in the Press the series was a disaster for the Scots. The first race was called off when the wind died, Challenge leading Kyla by a narrow margin. On the re-run, again in light airs, the American boats got the first four places, followed by Kyla, Saskia II, Melita and Vorsa.

For the second race there was a sixteen knot wind and the course was twice round a twelve mile triangle. The American boats got four out of the first places, the order being Bob Kat II, Challenge, Vorsa, Annis, Lucie, Kyla, Melita, Saskia II.

The Scots then chose Kyla to represent her country in the Seawanhaka Cup, while the Americans chose Bob Kat II. As good Corinthians Kyla’s crew remained unchanged, while Bob Kat II picked a new crew (and some fine sails) from the other boats. Kyla’s foredeck hand Udy Russell would now be pitched against Rod Stephens.

For two days there was a flat calm and it began to look as if time would run out before the scots would have to leave on their return voyage. Then it started to blow.

The first race took place in a 15 mph easterly, twice round a six mile windward/leeward course. At the start Bob Kat II as leeward boat used her right of way to carry Kyla over the line for a recall. Kyla squared off and ran down, followed by Bob Kat II, but the latter had less distance to go and came back through first. Kyla closed the gap on the beats, but Bob Kat II won by one minute and thirteen seconds in an excellent race lasting two hours ten minutes.

Bob Kat II won the second race by one and a half minutes. In a strong easterly with a rough sea the yachts sailed a triangular course. They were always very close but Bob Kat II got away on the reaching leg by hoisting a big double spinnaker. When Kyla put hers up she closed the gap, then at the gybe mark Kyla got hers down while Bob Kat II gybed the sail, managed to keep it flying although very shy and got away.

The next day it was calm again and the race was cancelled with Bob Kat II in the lead. The decider followed in thirty knots of wind. The dirty green water of the sound was streaked with white foam as the yachts were towed out with reefed mains and working jibs, keels showing in the squalls.

Kyla started first and did well on the beat, looking as if she would pass in front of Bob Kat II, when there was a problem while tacking and she had to go briefly back to the old tack.

At the weather mark Bob Kat II got clear away, quickly setting a special small spinnaker. As she approached the mark boat Kyla got a wind shift and nearly hit it, had to put in two tacks to clear it and ended one and a half minutes behind. Kyla now set her spinnaker, at first on starboard tack but then had to gybe over, then as they approached the downwind mark Bob Kat II got hers down but Kyla’s was stuck aloft by a jammed halliard. The sail quickly tore to bits and she had to come up into the wind to cut it away, after which she was over nine minutes behind. Kyla now set a big genoa but this was too much and she laboured under it.

On the second round Bob Kat II played safe and didn’t set a spinnaker. Kyla was so far back she had nothing to lose, set hers and closed up a bit, but Bob Kat II was eleven minutes ahead at the finish. 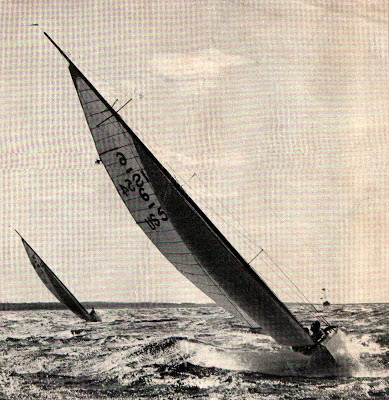 The foredecks of slender yachts are not fun places and the Americans were rightly complimentary about Udy’s performance. There was another reason, too

“Really Miss Russell had a more successful visit here than her father did. The morning of the last race she and Lorna Whittelsey had a match race of their own (staged by Phil Roosevelt) in Class S boats in the bay at Seawanhaka,
and Miss Russell won by a length after a great race in a Nor’wester that was anything but a ‘ladies’ breeze.’”

Lorna Whittelsey was a year or so older than Udy Russell and every bit a match for her. A competitive sailor since the age of six, she would win the Women’s National Sailing Championship a record five times and would just have returned from Stormy Weather in the Bermuda Race, the first woman to take part.