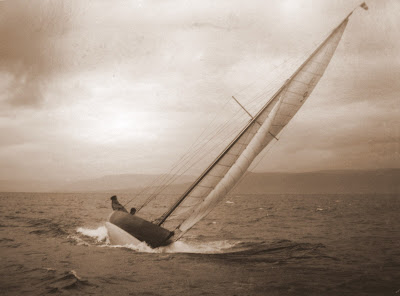 Protests are the nasty side of racing, featuring committees formed of jumped-up sea squirts masquerading as lawyers, ignorant of the rules of natural justice, revelling in their one day of power and recalling unsettled scores better long forgotten. They rarely produce results that would stand in a proper forum. Sadly a look through the archives shows that it always was thus.

At the start of the Royal Gourock Closing Regatta at the very end of the 1933 season an incident occurred that changed Scottish yachting history, leading certainly to the first and possibly also to the second of the two transatlantic challenges that I wrote about  here,  here and here. The dramatis personae were Herbert Thom’s Gigha, Robert Sharp’s Bernera and Willie Russell’s Sanda. What follows is courtesy of Willie’s daughter and foredeck hand Udy, who has bequeathed to us a careful diary record. On the page for this race we find:

“1st!! Crew Daddy, Harry, Udy, Hamish Ross
Two boats with protest flags flying!!!!
At the start Gigha and Bernera fouled with us in close attendance and we got away and were only passed once by Gigha. It was a very close and exciting race, squalls coming everywhere, we had the spinnaker up hundreds of times and it was terribly tiring but thrilling. We were first round every mark, which was quite a change for Sanda. Southerly wind all the time but it did not carry past the Cloch with much strength.
Gourock Committee disqualified Bernera and gave Gigha her 2nd prize. We think we ought to have been disqualified if Bernera was, so we asked Sharp to go to the YRA. I think he is going.
Results:- Sanda 1st, Gigha 2nd Bernera disqualified.”

Here is Udy’s faithful record of the outcome. First, her own report.


At the start of the race Gigha fouled Bernera.

We were to leeward in close attendance. Gigha approached the line off the wind, while Sanda and Bernera approached it on the wind.

Sanda luffed Bernera right into the wind and Bernera responded.

Gigha shouted to us “I’m on starboard tack,” she then hit Bernera near her mainstays. By this time we were well across the line and Gigha had had plenty of room at the mark.

Bernera could do nothing as she was in a sandwich. We just managed to keep clear when Bernera was forced to bear away. 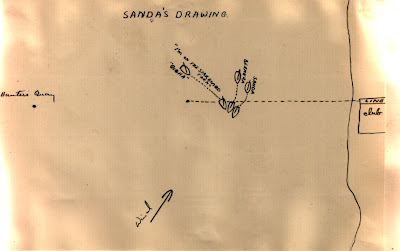 We say in Sanda’s evidence that the boats were converging and Gigha had plenty of room at the mark. She was the weather boat and should have kept clear. She did not shout for “Room” or “water.” 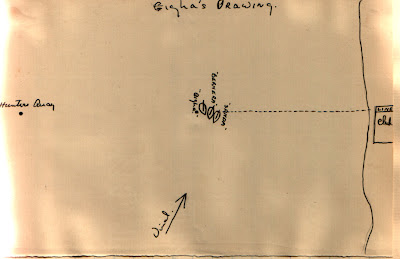 Gigha brought four witnesses which were heard and Bernera only got one of his two witnesses heard.

The Committee were very muddled and did not know what to think. They eventually took Gigha’s evidence against Sanda’s and Bernera’s. The case may go before YRA as Sanda should have been disqualified if Bernera was.”

The Royal Gourock Committee wrote on 28 September with their findings.

I wish to give you notice that I desire to appeal against the decision of your Sailing Committee in the protest between Bernera and Gigha, as stated in your letter of 28 September, on the following points:-

1             Rule 46 YRA states that the principal or his representative has the right to be present during the hearing of the evidence.

2             It was stated by you as proved that Sanda luffed Bernera. Why is Bernera disqualified and not Sanda?

3             Gigha makes no attempt to avoid a collision but struck Bernera. Rule 30 YRA section B states that windward yacht must respond to luff and protest if she thinks fit.

I shall be grateful if you will arrange for the evidence in this case to be reheard in the presence of Mr Thom, Mr Russell and myself. Mr Russell of Sanda is particularly keen on this being done as he was the winner of the race and feels that his position is most unsatisfactory as the matter stands.

Here is the reply

In replying to your letter of 12th inst I beg to report that the Sailing Committee do not see any necessity to reconsider their decision and can only advise you to appeal to the YRA.

As regards Rule 45 YRA this rule prescribes that the principal, or his representative on each side, shall have the right to be present during the hearing of the evidence, but does not say that principal must be present and, of course, you did not ask to attend yourself during the meeting.

As the YRA would have had no power to overturn crucial findings of fact Robert Sharp and Willie Russell decided not to take matters further.

The episode left a very bad taste in the mouths of the Sharps and the Russells and I’m not surprised. Herbert Thom was well known for gamesmanship and probably felt he was entitled to shout “starboard” at other yachts also on starboard, but it’s astonishing that he won after being found untruthful about the call for water. I haven’t researched the relevant rule in 1933 about calling for water at the start but clearly the over-riding rule to avoid a collision was in force. Shouldn’t Thom have done this, hitting the start mark if need be, after all these things are designed for it?

For Willie Russell Thom’s shout was a shout too far. He decided forthwith to leave the Scottish Islands class and return to the six metres, commissioning Alfred Mylne to design him a new yacht, Kyla.