In the decades since the first pedestrian excursion described in the last post I’ve been through the canal many times in varying weather conditions and with an assortment of boats and companions.

It isn’t great fun in pouring rain and a strong following wind is worst for old yachts with wing engines or outboards, as you can’t slow down at the locks.

On a cool dry day with a group who’ve been through before it can be a nice sociable day. Rope throwers of the one-coil school can add excitement and fun. Either way it’s best to settle down to a full day of enjoying the history and the scenery.

Last month Captain Cormorant offered me a berth on his fine ship and our passage brought a lot of memories back.

We left Loch Melfort in darkness and had a good voyage down under power against one of the neepiest tides in the year. There’s something very special about being the only boat out on a still morning in Autumn, well wrapped up against the cold, drinking hot strong coffee and solving the problems of the world (or maybe just Scotland). In the old days there would have been a bit of smoke around too.

We pushed through against the last of the tide at the Dorus Mor by hugging the Craignish shore and were joined by the extra shore crew, who had driven down after their breakfast and were surprised to find us already in the basin. 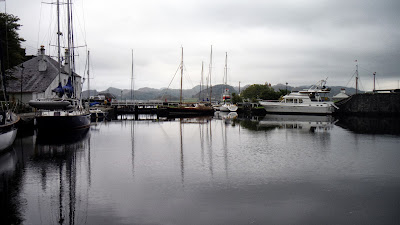 There was a slight hiccup after the Captain had checked in to the canal when the engine, which had run perfectly earlier, refused to start. While this was being solved by a process involving prayer, three other boats joined us, making up a good squad with plenty of muscle power and good chat. 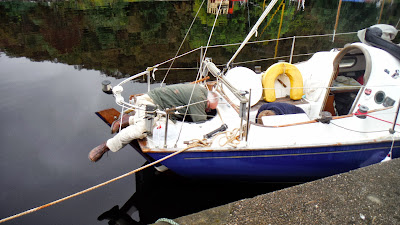 There are always some interesting vessels to be seen in the canal, and one wonders if they ever venture out. These do: 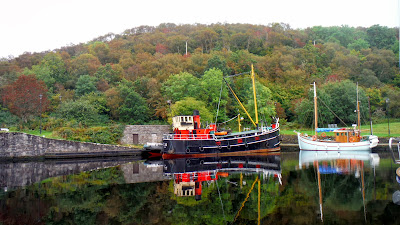 Not sure about these: 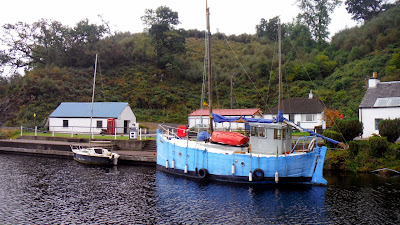 We started too late to have any chance of making the complete passage, but after a good day’s work the good Captain was last seen heading to a pontoon above Ardrishaig, with only a couple of locks between him and the open sea. 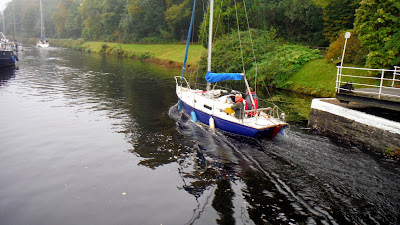