A reformed Rockhopper's Thoughts on Ballast 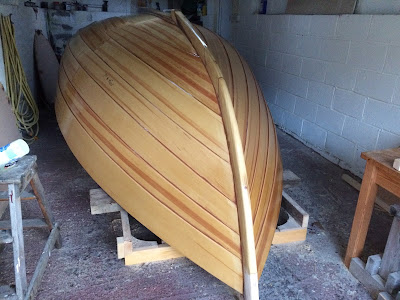 I have a couple of confessions to make and don't know which of my sins is worse.

In the West coast of Scotland, where I sail, there's a great deal of deep water, but sadly there are also an awful lot of rocks, with a strange capacity to spring up at odd times, usually when you're opening another bottle or storming along on a beam reach without a care in the World or both.

Some of these rocks have special names, after the ancient mariners who found them and maybe foundered on them. Nearby we have Campbell's Rock and Hutchison's Rock to name but two. Others just have generic names, like Sgeir Dubh, the black skerries that you find all over. Anyone who has sailed here for a while will have met one or two of them, otherwise is probably dishonest.

The problem has been recognised by yacht designers over the years and may be a reason for the considerable drag often given to his long keels by Alfred Mylne and contemporaries. The old yachties knew that with luck gravity would help them to slide back into deeper water. Indeed an old lady assured me that Scottish Islanders carried a spinnaker pole for the sole purpose of assisting on those occasions.

Mylne's keels also feature a sloping forward end, which means that when you do strike it's the lead that hits and absorbs the shock rather than the delicate timber structure of the boat. Contrast the extensive damage done to a deep modern fin keel cutting the corner in a race at speed - boatyard's delight!

This brings me to the second confession. I've messed a bit with Iain's design, bringing the ballast keel forward and sloping it, as you will see from this photo showing the pattern for the lead. 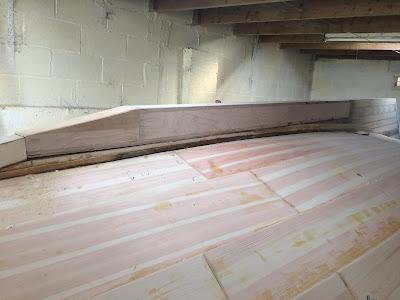 The effect of this is to add some lead forward, but I've also deepened the ballast from 125mm to 135mm, an overall increase in weight of about 8% to something a little over 400kg. Factors in this were receiving from Iain at the start of the year an amended construction drawing suggesting a modest increase in draught and a feeling that there's plenty displacement and it won't harm a beamy centre boarder that is not to be trailed about to carry a bit more weight. Also we're experiencing much stronger winds around here in Summer, due to climate change. Time will tell.

I haven't posted here for a while, as having got the hull done in January progress has become slower, building deadwood and the keel pattern. I had a trip to the wonderful town of B'oness, a Victorian jewel surrounded by oil refineries, where Ricky the foreman at Ballantines Foundry declared that my effort should just about serve as a pattern, so the keel will be cast in Scotland at one of our oldest family companies, now in the seventh generation.