I’ve been involved with epoxy resin, rather too closely for my liking, for about thirty years and have developed something of a love/hate relationship with it. Fortunately it hasn’t caused any other issues, which is a little surprising, because before I became as fully aware as I now am of the risks a fair amount of it found its way onto my skin. There is currently a surging interest in working with it, not just for boatbuilding, but also making cabinets, musical instruments and so on. I thought it would be helpful to offer some tips and advice from an experienced but lay perspective.

The curing process involves the coming together of the two components without requiring a third factors, such as moisture or air. This means that it does not shrink during curing and can thus, subject to the addition of suitable fillers, be perfectly gap-filling. In fact joints can be made a little loose and still be strong, something that infuriates traditionally trained craftsmen and women.

Over the years I've tried various other glues that were said to be gap filling, but it seems that none truly was. But I have at least one boatbuilder friend who will disagree with this.

The main advantage is simply that a joint made with epoxy, if properly protected (see below) will be far stronger than the wood it is joining.

The main one is the risk to health. We are told that epoxy resins and the relative hardeners are not carcinogenic but I'm not anxious to be the person who proves that wrong.

Demonstrable os the fact that exposure to the components, probably the hardener rather than the resin, results in people becoming sensitised, so that any time they are newer to epoxy they come out in red blotches and feel weak. I once knew an old retired boatbuilder who could not even sit in the cabin of a boat built years earlier with epoxy without this happening.

Less important is that it's one of the most unpleasant substances to work with, sticky of course but in a rather special, nasty way.

It's also very sensitive to ultra-violet degradation and must not be used as an unprotected external coating, however née it looks when fresh. This is a very good reason for avoiding brightwork altogether, just giving the cured surfaces several good coats of gloss paint to keep the light out, saving heaps of future maintenance work in the process.

Finally, it's usually more expensive than other glues.

Next I'm going to describe briefly how I use epoxy and in the process explain how to capitalise on the advantages and minimise the downside and save money.

Gloves or no gloves?

Personally I prefer not to wear gloves, because I believe it's better not to get my fingers sticky in the first place.

When building a community skiff a few years ago we had to adopt the industry standard of providing boxes of surgical gloves and requiring people to wear them. In fact two pairs must be worn, as it's almost impossible to get them off without getting glue on one's skin. I suspect that wearing gloves gave some people a false sense of security and made them careless, because most of the glove could not be used a second time. If you get a hole in the end of a finger you're in real trouble.

When you get glue on your hands, which of course I do, wash immediately in warm water with conventional soap. In no circumstances use acetone - it removes the natural protective oil in the skin and facilitates the passage of toxins into the body. Doing this forced a career change on a man I used to know, from modern boatbuilding to the manufacture of fake antiques, the latter more profitable but not without risks, only judicial ones rather than to his health.

Use weighting scales rather than pumps

I've yet to find pumps that were accurate ad have given up using them, since portable digital scales and so cheap. Protect the scales with plastic film.

This enables very small quantities to be mixed accurately and saves money and mess. By the way I've been told the correct West mix is 100:17, not 5:1!

Washing out and hoarding the pastil cartons that supermarkets insist in using is a sure sign to one's partner that another boat will be along on a year or two, if he or she hangs around that long.

I like the wee yogurt ones, because the corner suits my thumb and ensures that I pick it up the same way each time. The bigger soup and cream ones are great for larger mixes.

The best companies provide instruction manuals and sell ranges of mixers and fillers for all purposes to produce the best joints, coatings, space fillers etc. Buy those and use them. Using sawdust to bulk out joints may seem to save money, but may result in a glue starved joint.

For example, laminating inwales from long strips of softwood involved mixing ore glue than I like to work with and unavoidable handling of these bendy, slippery strips.To cope with this I got a big commercial roll of plastic film  and covered the bench with it, then a second layer on which the strips were placed. Once they were coated (leaving a couple of inches at each end dry, to enable them to be lifted and cut off later) I flipped the glued faces together and folded the film over to enclose the workpiece totally. It was then easily transferred to the outside of the hull and left to cure. Later it would be lifted off, cleaned and fitted permanently to the inside.

I read a lot about jobs being halted during periods of cold weather, but think a lot of this can be avoided if the glue starts out reasonably warm. I keep mine (in an old feed box, to avoid mess) in the boiler room in the house. Heat guns are handy, too.

To Pre-wet or not to pre-wet?

This is one of the new religions taking over the World. The Gospel according to the Gougeon Brothers says to do it, but it doubles the spreading time. There's no doubt the first coat of epoxy disappears into the dry timber by the time you apply the second coat with the fillers. Adding some filler with colloidal silica renders the mix less runny and so less inclined to sink in, so just use one coat? On the face of things this should save both tie and glue.

I won't disclose my preference, my beliefs in this field are personal, but just say that I've yet to have a joint that failed and the basic trick is to use plenty of glue.

As Captain Pete said, the time to worry about whether you used enough glue is not when you're five miles offshore in a gale! 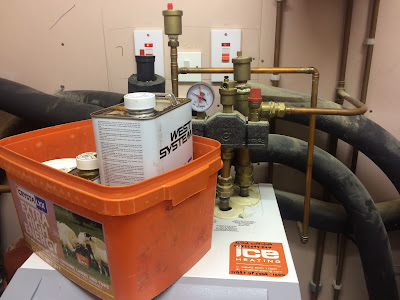