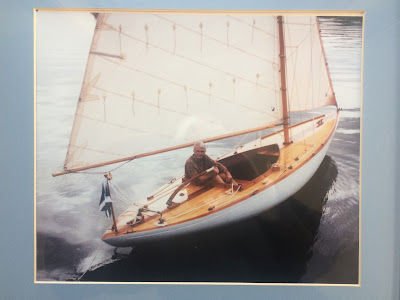 Twenty five years ago I was busily engaged in building this slippery little daysailer in a disused industrial unit I had rented for the purpose. I decided to call her Sonas, a gaelic name for a state of happiness, which has graced a number of yachts over the years.

By 1992 I had built three boats, a Joel White Nutshell and two of John Gardner's designs, the Quincy skiff and the Swampscott Dory. I was looking for something to venture farther afield and had bought plans for the Joel White Haven Class when Don Costanzo asked me why I didn't build something designed locally and mentioned David Ryder-Turner as someone who might be interested.

A few weeks later David clumped up the drive at our house in Argyll very early one Saturday morning and we met for the first time. He must have left the Clyde before dawn. He had under his arm a loaf of bread which he had baked, a bottle of wine and a set of drawings. Number 41 was a little centreboard canoe yawl, very long and slender. The lines and sail plan were pinned on the sitting room wall and studied in great detail over the next few weeks. After the visit we kept in touch by phone. The new design became number 42.

David's idea was that we would build two identical boats, one for each of us, with me providing the labour and much of the materials in exchange for his design input. After I had committed to the unit and purchased enough timber for two hulls he decided not to proceed with his own yacht, which certainly saved a lot of effort, but left me with a hefty overhead. David was an utterly lovely, inspirational and funny man, but one of life's perpetual dreamers.

Over the winter of 1992 moulds were made, the stems laminated and David got on with the drawings. I started working out the building schedule and wondered how to build a boat while keeping on top of a demanding day job. Eventually this led to shifts of 8.00am to 4.00pm in the office followed by 5.00pm to 11.30pm in the workshop a couple of days per week and two full shifts at weekends. David would turn up from time to time, exert some quality control and advice and leave me with a list of instructions for the next stage.

The build was to consume about two thousand hours of work, from me mainly but also my dear friend the late Duncan McKay, who had returned from life at sea rather unsettled and got himself a taxi, which left him free to attend almost daily.

The hull was constructed upside down over MDF moulds from Western Red Cedar strips, fastened to a Douglas Fir skeleton, a great way to turn out a lovely hull quickly and accurately, then given an outer shell of epoxy saturated woven glass roving. (Originally the hull was to be covered with mahogany veneer and I bought enough for two hulls from McGruers, another of David's dreams that evaporated, as it would have been a dreadful, messy task.) WRC is rot-resistant, very light and strong, but the stuff I got from a well known supplier was very mixed in quality. A lot had been machined with no regard for the grain and was discarded. It is poisonous and if you get a little skelf you really feel it a few days later. It had been machined with concave and convex profiles, which made it very difficult to ensure that the spaces were truly full of glue. Doing the job again I would use Douglas Fir or Honduras cedar and get it specially milled with straight edges. Of course this would also be heavier, but you would reduce the dimensions to compensate.

Once the hull was turned, at a special party organised by David, the job became more fun.
I found a single log of ancient yellow pine, which I got machined for deck planking. It was epoxied in strips on top of 7mm ply giving a finished deck thickness of about 16mm.

Covering-boards and kingplanks were made from mahogany, as were seats and other internal furniture, all hand-sanded to David's exacting standards.

The keel was cast in Cornwall by Henry Irons from a piece of lead saved from Kentra’s old one. William Fife’s wonderful creation of 1923 was losing a little weight to balance the installation of modern equipment. The new keel was delivered to Scotland on the back of a Cornish cream lorry.

Sonas got the very best of rig and equipment, spars from Collars, sails from Gayle Heard, blocks from Harry Spencer, and Classic marine and rigged by Iain Gillies.


Construction was finished in Argyll and she was duly launched in 1994, the late Duncan on the left and me in pink teeshirt on the day.This photograph, taken by David, carries the caption on the Classic Marine website:

"Designed and built by David Ryder-Turner. Words fail me, just look at it. Photo: Owner" 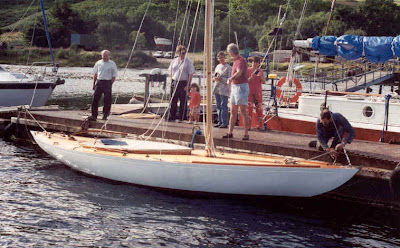 I immediately discovered that Sonas was seriously over-canvassed in all but the lightest conditions. I found that the hull was basically a scaled-down model of Fife's Latifa, a yacht that David had long admired, but he hadn't appreciated the need to re-engineer it by increasing the displacement as the size went down. I generally sailed her with one reef, as can be seen from the photographs below. When I eventually parted with her the new owner was fully aware of this and that he should consider having the sail plan remodelled.

Sonas looked absolutely stunning and attracted quite a bit of interest, some of which looked like producing requests for the plans. I suggested to David that he should significantly widen the hull, add more lead and include a centreboard, which I felt would make her easier to handle ashore.

David's original design no 41 had the yawl rig and I had rejected it, because I considered it fussy in such a small boat. This would have been better, with Bermuda rig, as it would enable you to sail home comfortably under foresail and mizzen when the wind got up.

Overall the project was highly educational in more ways than one. The UK yachting press showed no interest in the finished yacht, probably because there would have been nothing in it for the commercial interests that dominate the glossies. Oddly she was written up in Classic Boat in June 1993 before she was built, but they showed no interest at all when offered a follow-up article. Wooden Boat later ran an article on the modified design, based on my suggestions. 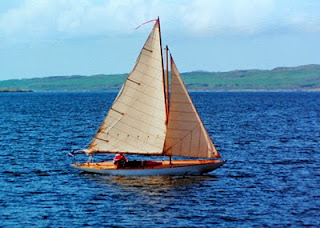 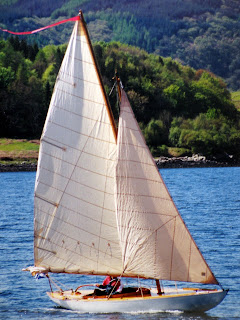 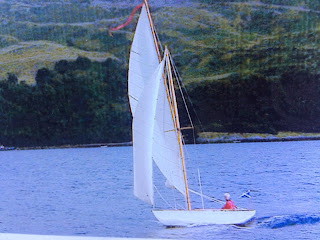 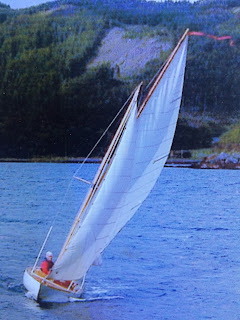