The lang skiffs are here 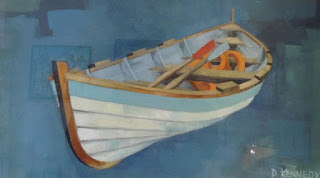 Only twelve hundred years or so after the Norsemen introduced the inhabitants to the sport of competitive rowing fleets of long narrow double-ended boats are appearing all round the coasts of Scotland.

An idea that sparked somewhere near the Scottish Fisheries Museum in Anstruther three years back has caught on, with over eighty kits of identical parts cut on a computer-controlled router and turned out by Alec Jordan from his workshop in Kirkcaldy, to date. As fleets turned out for regattas throughout the summer the project started to spread like a very benign virus, combining communities and their collective woodworking, organising and rowing skills.

Diverse groups are forming in rural and island communities, some already together through existing clubs and schools, others uniting through the love of boats and rowing. The idea is spreading abroad too, with several boats building in other parts of Europe such as England  and the Netherlands, also some in the United States and Australia. The first Skiffie Worlds will be held in Ullapool next July.

There are various formats to organise a build, but most seem to adopt the historic model of financing the boat through 64 shares, typically costing £60, then operating the finished skiff via a club. In truth very little organisation is required once the build has been done, most setting up a website for communications and booking the use of the boat.

In my corner of the West coast the Seil Skiff is well advanced and we hope to have her launched before the year is out. We adopted the sixty four share model to finance her and the community decided not to seek out charitable funds, something we're pleased about. You can follow the build on her website here:- www.seilskiff.org.uk

I feel privileged to be involved in an exciting and absorbing local venture, bringing people together in a productive way and hopefully leading to many happy days on the water.

The regattas to date have shown that these boats are very fast and seaworthy indeed. Races typically take place over a course of a couple of miles, with heats for different age groups. They also provide a huge impetus to local economies, the larger events attracting hundreds of participants and spectators.

For full information and plenty of photographs and more visit www.scottishcoastalrowing.org

The image at the top is by Paul Kennedy inspired by the Portobello skiff Jenny Skylark.