The event was well named, because visiting Loch Awe is indeed an adventure.

Coastal Rowing is quickly spreading inshore, and this event has shown one
again what close competition you can have on tideless waters. Conditions last
Sunday were ideal, with totally still water during most of the event.

The arrival of skiffing on Loch Awe is entirely due to the efforts of Gordon Leveratt
and his wife Maggie, making what I hope isn’t too stressful a journey from an organised
world to the wonderful anarchy of the skiffies. Having built the lovely Mingulay, he
established the KIDS (Kilchrennan, Inverinan and Dalavic CRC) and they already
have sufficient numbers to justify a second skiff. 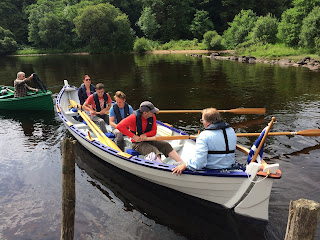 Last Summer Gordon invited some local skiffs for a visit, and we rowed down from
Kilchrenan to explore Kilchurn Castle. We didn’t know that we were a trial for greater things! 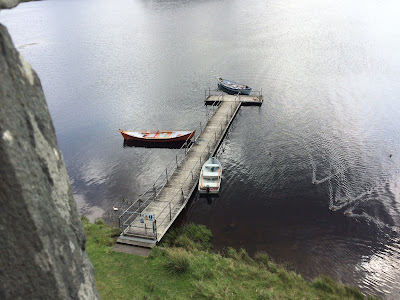 Dalavich had always been a bit like Brigadoon for me, a place I wasn’t quite sure existed,
although I’ve lived nearby for over thirty years. I can confirm, as can fifty tired rowers,
that it not only exists, but offers one of the best bases for a skiffing event that you could
wish for. There’s plenty of space for parking and unloading, a huge level campsite, cabins
available for those who want some luxury, including hobbit rooms, a community centre with
a proper hall for ceilidhs and nearby the Wild Rowan Cafe with great home baking.

Gordon had laid on everything for a safe, happy, competitive event, including even a towing buggy
to the launch site.

I missed the Friday arrivals and the musical evening with Martin McLaughlin on the bagpipes.

Saturday morning was a bit dreich and rainy at first, but soon cleared to allow a lot of social rows
and “try a row” sessions, also some great trips to the dreaded prison island of Ardchonnel and some
of the twenty two local crannogs. While I was out with North Queensferry we saw the local osprey take
a fish back to her treetop nest, worth the trip for that alone! 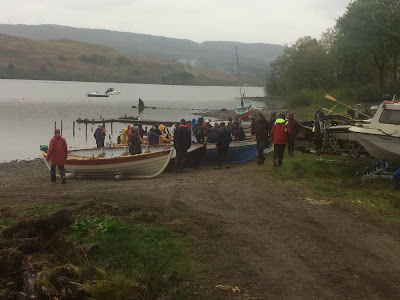 We had a great meal in the hall in the evening, followed by the ceilidh hosted by local group
All About the Cake, locals Laura Neville, Jane Wilding, Jeannie Holles and Andre van Well
playing out of goodwill. The fear an tighe, Guy Neville, managed to get about forty skiffies up
to dance a passable Reel of the 51st Division.

Sunday was much brighter, with almost still water.

I had agreed to hold one end of the starting tape, always quite nerve wracking when there’s
a biggish fleet on a transit. Despite our general dislike of discipline skiffies do rise to the occasion
and the fleet lined itself up straight for a perfect start. All I had to do was pull the trigger, then off for
banana cake and coffee while ten crews battled it out.

Being a land based event the distance was 7.4 statute miles from Dalavich to Taychreggan, then a crew change and an individual start for the race back.

The outward race was astonishingly close, with Sandbay from St Andrews covering the distance
in 1 hour 16 minutes and 8 seconds, followed by Arran’s Seabhag 22 seconds later, five boats within
the next 12 minutes and finally the KID’s own Mingulay on 1 hour 37 minutes.

It’s a great tribute to the Renegades that they made the whole trip without a crew change and achieved
times of 1 hour 25 out and 1 hour 39 back.

The fastest boat on the return trip was Seabhag with a run time of 1 hour 19 minutes, followed
by six boats in the next twenty minutes, then Blue Bay, Mingulay and finally St Moluag on 1 hour 48.

Combined results made Arran’s Seabhag the overall winners, then Sandbay from St Andrews
and Yolande from Kinghorn.

We had a good shore crew working on the times, Heather writing them up and Nigel making sure
that the right boats got the right times! 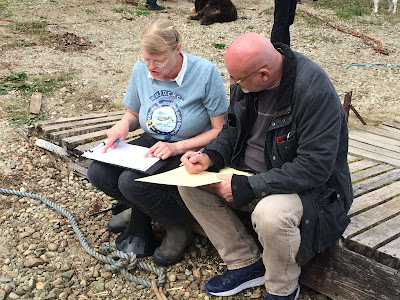 It all ended with a cheery prizegiving and some beautiful trophies. 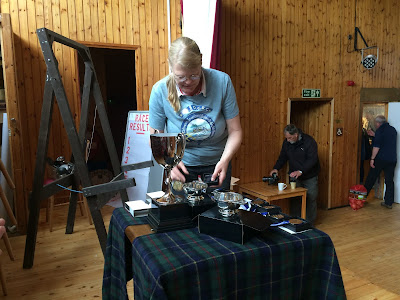 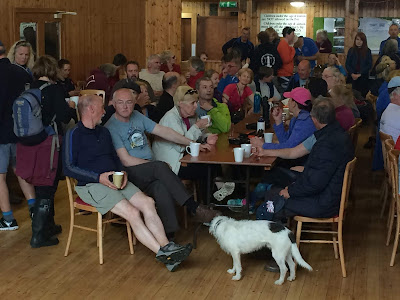 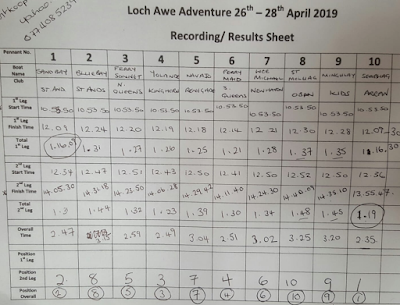