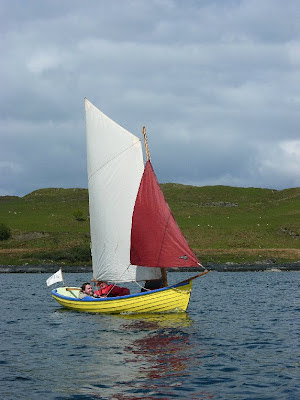 Years ago at an art show I got in conversation with a very well known major Scottish artist famous for her countryside paintings. who asked me if I painted and when I said I didn't terminated our conversation pretty quickly. Later I realised that if people like me didn't build boats people like her wouldn't have them to paint.

Fife famously liked his boats to be "fast and bonnie" and I think most of us who make them would agree. It's difficult to imagine how one could be motivated to spend a year or two building something plain ugly, but then, I hear you say, there could be some functional beauty? Did Fife's lovely long overhangs really contribute anything other than weight where you don't want it and corners of damp rot?

Above is my wee Christmas Wherry, designed by Walt Simmons of Duck Trap Boatbuilding, which I think is pretty as well as functional. She is seen in her present configuration and colour scheme and has arrived here by quite a tortuous route.

In the early days she had a centreboard, set fairly far aft, and no jib. As a result she tracked along nicely but made a lot of leeway and was a pest to put about. This led to the centreboard being removed and replaced by a dagger board a couple of feet forward, which cured the tacking problem at the expense of introducing quite severe weather helm. In turn this led finally to the jib and bowsprit, resulting in pretty good balance.

The forward dagger board has cleared the internal space, which is better for the crew, but in turn produces the constant problem that one of Argyll's travelling rocks will spring up unexpectedly. When the current season is finished the centreboard is going back in, positioned somewhere between its original place and where the dagger now sits. Here you can see the remains of the original centreboard slot, and the daggerboard box forward. 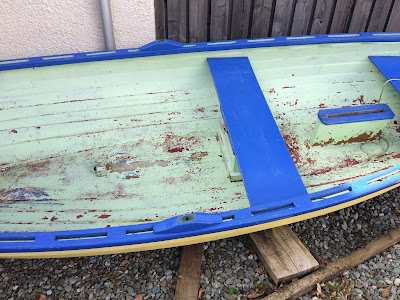 This image shows another truth about the boats we build, which distinguishes them from artworks. Once they're done we lose interest in maintaining them. The inside is an utter disgrace and will be totally repainted when the centreboard is done.

From the outside the good ship Kelpie still looks ok and the sprit-sail, made by Gayle Heard twentyfive years ago is still setting well. 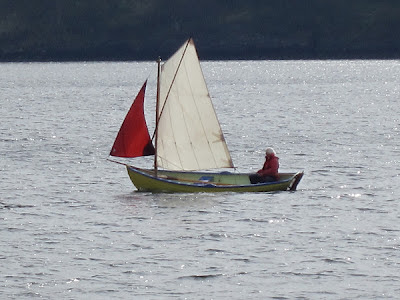 The sprit is both lovely and functional and an excuse for nice things like rope grommets. 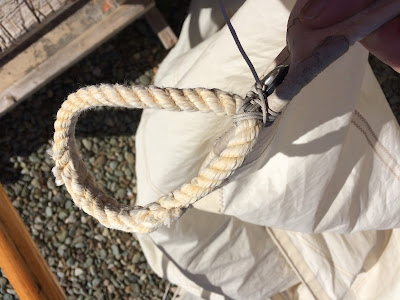 And with a little boat like this you can enjoy extravagances such as the tiny blocks that Harry Spencer made for me in 1990, with farthings for keepers. 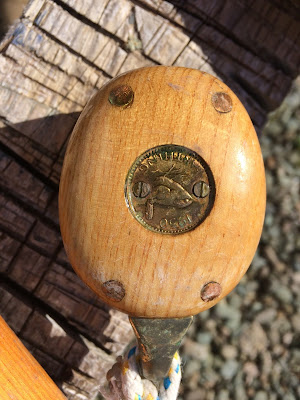 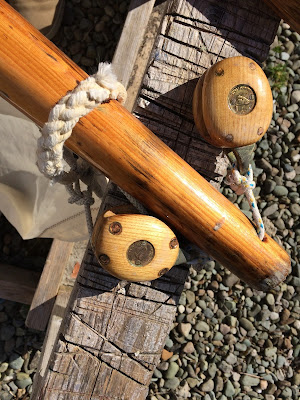 Come to think of it, they're also functional as well as pretty. 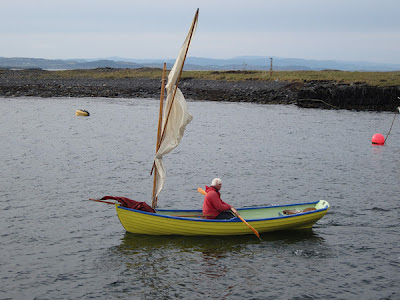 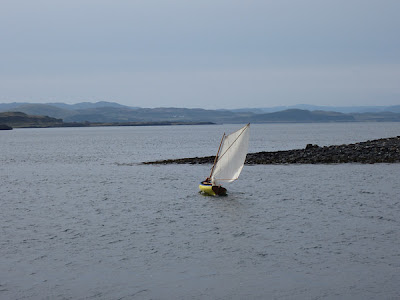