Now we are three! 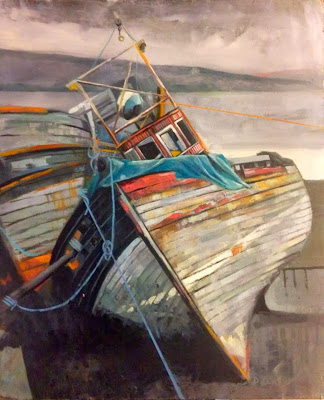 This blog has just passed its third anniversary and I thought I'd have a look at the statistics to see where we're now at.

As it says on the cover my idea was to cover everything about boats, more or less in Scotland and it's interesting that there's been a lot of interest from outside our little, perhaps soon to be free, country. In this context it's fascinating to note that there has been an avalanche of hits from Poland on the post I wrote about Don Roberto, which I guess is due to the current interest in Scottish independence. Recently there has been an increase in hits from Spain, I suspect for the same reason.

This being post number 156 means that I've managed an average of one per week throughout. Pageviews are nudging 150,000 to date, about 1,000 per week. Not bad for a non-monetary blog that will not carry commercial advertising.

Recently I've been heavily involved in skiffing and so had less time for research, so there haven't been so many historical posts as earlier. If you're new here please have a look at some of the earlier posts, such as the very first one The Scottie which are I hope still worth reading. One of my favourites is about St Abbs, the little port that had a huge impact on the young me.

Apart from needing to feed a writing habit the main reward from this blog has been the feedback via comments and private emails, resulting in a lot of data being preserved. So, if you have anything to do with boats that you want to share, please let me know.

The image at the top is from a new series of works by Paul Kennedy, prints of which will be available soon.
Posted by Ewan at 09:51