The strange habits of the Seilachs 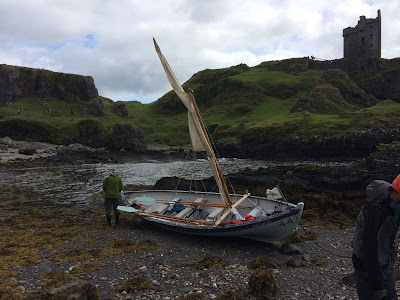 “It's a kind of black market activity, kept under the radar to avoid accidents with inexperienced people sailing boats with no built in buoyancy or side decks, and all the more delectable for the illicit flavour.”

The above quote is from Professor Pedro H Watson, the well known mathematician, naturalist, traditional boat builder, green guru and plague survivor, on hearing that the simple islanders of Seil had put up a sail on their skiff.
We can’t get too angry with those wretched islanders. No state of the art bridge for them, equipped with devices to remove ice, electric signs to warn of escaped wildlife, these primitive folk have to traverse one of the oldest bridges in the World. Not only that, it crosses an ocean, so mostly they stay at home.
They exist in small hovels along the shore, eking out an existence by the manufacture of scarecrows and the staging of strange shows. At times they can be heard singing curious songs composed by one of a family famous for boating songs. From a distance they sound like happy seals.
In the days of sailing ships these islanders were namely for rowing out to vessels in distress looking for plunder. Nowadays, sadly, modern navigational systems have deprived them of this simple pleasure.
In mitigation of their crime we can only say that having seen those ships and their modern equivalent, the sailing yacht, temptation got the better of them when they came across a neat little mast, a sprit sail and a tiny jib. It took them just minutes to make a hole in the forward thwart and off they went.
Through the Cuan Sound they went, admittedly under oars, then up went that sail and North they flew before the breeze.
They had heard of Oban and its world famous tower which jealous folk and jesters have been heard to call a folly. When, ahead, they saw a magnificent stone pile atop a cliff they promptly made landfall, thirsting for strong drink, but found instead a castle that had lain abandoned for several hundred years. Fortunately they also found nearby an extremely nice cafe, where they had a cream tea before returning home. To their delight they found that the skiff went well to windward under those tiny sails.
In conclusion we must stress that although innocent of the ways of the world those islanders were by no means inexperienced in sailing small open boats on the sea. Indeed they had among their number a fine navigator with a curious resemblance to Professor Watson. 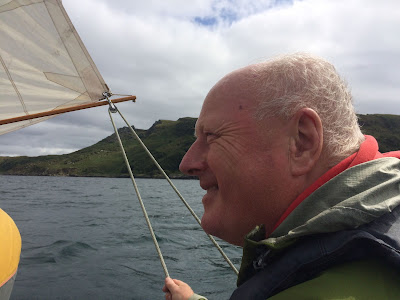