Happy Holidays on the Costa Clyde

MacAllisters yard in the 1970s was a cheerful place to spend winter weekends. It was run by two men, I think brothers-in-law, Mr Buck and Mr Kinnear. It was rumoured that the family fortune had been made from manufacturing carbon paper and when photocopiers came along they had decided that the next growth industry was running boatyards.

The yard was a sort of retreat for the various dreamers and escapists who inhabited the boating scene of those days and the two functioned as wardens. Discipline was maintained through the mechanism of Johnnie Buck’s Fourteen Day Clause, which nobody had ever read; the mere mention of it was enough, as most of the craft couldn’t have been shifted in a fortnight even if one could have found another home.

The sheds contained a remarkable collection of yachts in various levels of disrepair, probably about half of which went to sea each summer. A few, such as the wonderful Solway Maid, seemed to have been there for decades, I think because Mrs Carr, the widow of the original owner, couldn’t bring herself to part from her.

George Wolfe was one owner who did go to sea each year, in a lovely big motor cruiser, the Whigmaleerie, possibly a Laurent Giles design or a Fred Parker Fleur de Lys, but it pained him greatly to do so. Each winter every varnished surface was taken back to bare wood and redone, only to be subjected to salt spray and ultra violet all summer.

Young Alfred, Freddie Mylne, kept his Hillyard the Hillary there. He was very kind to me and gave me bits of gear when he found I was working on Stroma, his uncle’s design from 1929, in the adjoining shed.

John and Billy Gardner were present each weekend to work on the Unity, thirsty work that invariably took them to the end of Woodyard Road, where we discussed Rippingille Stoves and other niceties from the Riddle of the Sands. Sadly that nice wee hostelry, like the Gardners themselves and many of the others I write about, isn't there any more. 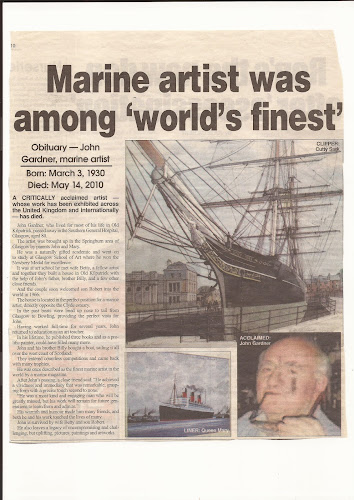 The doyenne was Mrs Keppie, a wonderful old solo sailor, who was privileged to be allowed a caravan in a corner of the yard, and kept a little cruising yacht in perfect condition.

Latterly the yard was managed by George Hulley, who has also died, just at the end of last year. He ran a chandlery business and had the sole agency for the epoxy glue that many of us were using. He refused to stock the slow hardener, because he claimed Scotland was too cold. When you used the fast stuff in hot weather it could go off in minutes with lots of waste, which perhaps helped sales.

George was best known for his involvement with the Ardens, and that’s a good topic to end this essay.

The first motor charter cruiser service on the Clyde has been established at Helensburgh and on Sunday the eight ton cruiser Morning Sky is due to leave with the first party of six persons on a week’s cruise on the Firth of Clyde.

The second boat is due to be launched by the end of the month. Chartering from Sunday to Saturday costs £30, and such has been the demand that the first boat is booked until mid September.

The boat was designed to keep down the price both of construction and chartering, so that a high class yacht finish was not contemplated.

Morning Sky is 28 foot 8 inches overall with a beam of 8ft 6in and a shallow draft of 2ft 6in. The air-cooled diesel engine of 13hp, driving a four bladed 18 inch propeller through a 2 to 1 reduction gear, gives a speed of seven knots and a cruising range of 150 miles.

There are berths for six persons, more than 6 ft headroom in the cabin, and the boat is chartered fully fuelled and watered and complete with cooking stove and utensils, crockery cutlery and bedding. The firm will even put groceries on board if they are ordered in advance.

The cruisers will be covered by insurance and for third party risks up to £25,000. Their cruising range has been limited to the Clyde above a line drawn West through the Little Cumbrae and the North of Arran, which leaves plenty of water to explore.

The boat’s outfit includes the sailing directions of the Clyde Cruising Club, a set of charts with suitable anchorages marked, anchor, chain, warps, fenders and a ten foot dinghy."

Thus was introduced Scotland’s first charter business, set up by two enterprising Glasgow businessmen and boating enthusiasts in premises in East King Street, Helensburgh. To build the boats they recruited the young George, a time-served boat builder who had been building Air-Sea Rescue craft in the RAF.

Years ago, John McNiven’s son Renwick sent me some nice memories of the early years of the business and a picture of the first of the “Skye Class” boats. 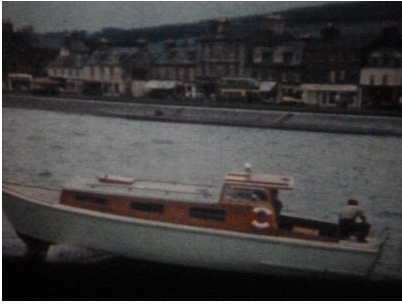 It would be interesting to know if either of the two survives. John wrote:

“Charter operations started up from an abandoned wooden pier near the head of Loch Long, however it turned out to be abandoned for a reason and the council promptly condemned it and put up the barbed wire fencing shortly before the charter boats were due to return.

One of the first charter parties turned up with a sea-going trunk fit for a passenger liner, this being too big to go in the cabin was left on the cockpit sole for the duration of the charter. However after this start the party phoned later to say that they were in ‘A-roach-er’ and after some language translation it was ‘Arrocher’ at the head of Loch Long, turns out that the point of the call was to say they needed a new anchor. The 30 fathoms of chain and anchor had gone runaway over the side in too much water depth in Loch Long breaking the securing strop.”

The motor cruisers were followed from 1963 by the very neat little Arden Fours,

“the concept being a ‘Folkboat with headroom’, sketched during a meal using napkins!” 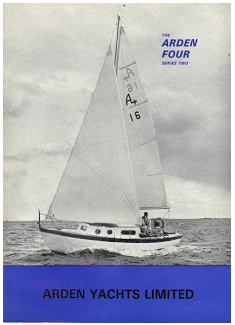 Thirteen were built in wood, then another fifty five hulls were built in fibreglass in England and shipped to Helensburgh to be finished. A final two, to a slightly different design, were built in 1971/2.

"The journey along Helensburgh’s promenade always had a large following, but then the tractor could only pull at a walking pace of 4 mph!"

Lots of Arden 4s survive and do good service as tough, seaworthy little ships with no great pretensions. One of them, built as Dirlie for the Crockett family has arrived in Kilmelford. 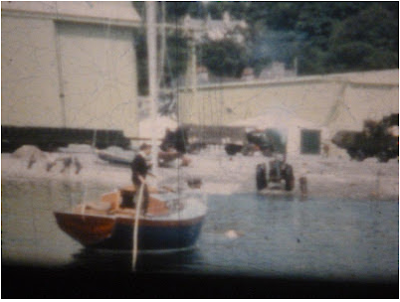 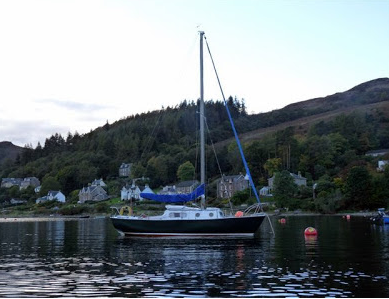 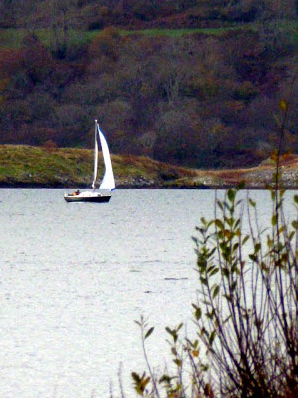 Post script: I found online the following quote, which could be a transcript of our chatter in that wee pub at the end of Woodyard Road, as it makes as much sense.

"Dumbarton is never fun.
Fine, young man, it was fast… I found an old buy boat chin, and it has a photo of yore Ardennes forest zone tribe, she is generic can not see the keel - This is the same design? …the yore Ardennes forest zone 4 would have been to add wood and then later in the GRP…. im not sure if the george hulley is designer when time i being chatted designer he mentioned a certain extent, he suggested it was not his. He also told me that some arden 4s augmented england south.- georges hulley in the dunbarton in operating a candle maker enterprise.
In Hulley Dumbarton Now, I may be disturbed."