Rowing from Loch Linnhe to Kilchoan 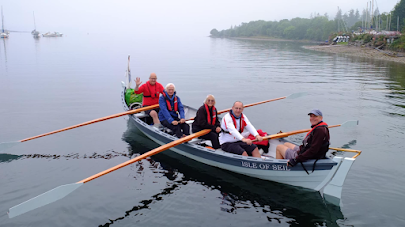 I’ve been reflecting that I’ve just completed the longest sustained physical effort to date in my seventy three years on this planet, rowing for a continuous five hours, minus short breaks for a slug of water, against a wind of a good Force Three, perhaps Four at times, with some confused tidal rips added, on our passage from Lochaline to Tobermory on Saturday. My deepest respect and admiration go to our Convenor, who insisted on battling out the entire trip over three days from Loch Linnhe to Kilchoan.

Robbie had created a very full and careful passage plan, incorporating our respectful consensus about the times of the tides, which were just off Springs and didn’t promise to be very helpful, with Low Water on the first day about 1500 and of course progressively later. 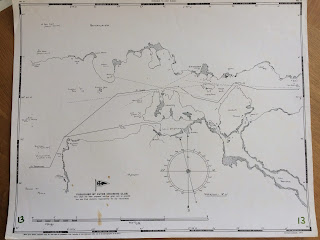 The crew assembled at the Linnhe moorings on Friday, where we were greeted very warmly by Paul and sent off in a dreich flat calm, coxed by Robbie down to our first wee stop in a lovely bay at the North West of Lismore. There I took over the coxing for the next hour or so of rapid travel with a big ebb tide, which seemed to follow us round the Morvern shore for another swap over, another slug and a bite of nourishment. We didn’t see much wildlife in the murk, (just one unidentified big thing made a splash behind us), but were glad of the ideal rowing conditions in what my Mother called a wetting rain. Distance travelled 21 Kilometres over four hours. 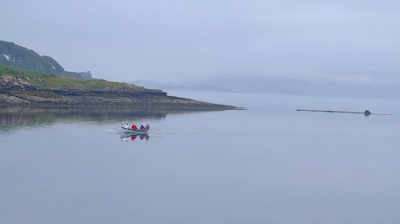 A very pleasant evening was spent in Lochaline, dining rather well in the Nest, followed by cabadaich agus deoch in the social club, a fine establishment, a little Seventies in style, then a night in the bunkhouse. 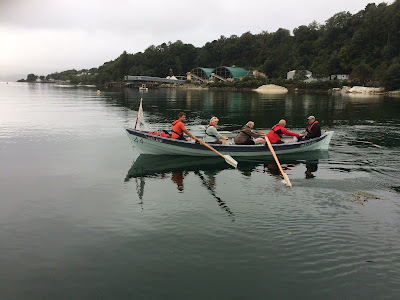 As noted above, the second day was quite a challenge. After offering encouragement and support to the local Witches of Morvern we set off about midday and had a fast ebb for the first five hundred metres or so. For the next hour Sue, Adam, Steve and Robbie took on some pretty challenging conditions as I did my best to keep us clear of the worst of the tidal rips and bring us round inshore as far as possible, where we assumed the tide would be slacker. By the time of our first changeover I was glad of the chance to warm up, if apprehensive about the challenge to come. In fact as the day went on the waves became a bit more regular, but the Sound feels very long when you’re travelling up it at about thirty heaves per minute.
Wildlife on this section amounted to one big grey seal, who stuck his head up and no doubt would have scratched it in wonderment had his flippers been long enough. I don't count the hundreds of caged salmon that we passed at Fiunary, the fittest of them leaping incessantly on the surface, the property of the “Scottish” Sea Farms company, in reality like most of the industry foreign owned. Aquaculture Scotland tells me that the site was only stocked in May, but the fish looked mature and may have been shipped in from a problem site elsewhere. Mortalities are currently about four and a half tonnes per month, as we hit maximum sea temperatures and sea lice levels. 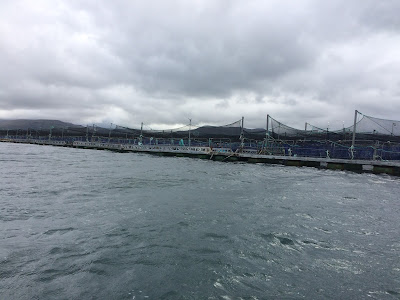 We had expected to finish in style with the flood going North through the Diorlinn, but instead had to overcome an adverse stream. Inside we were met by our hosts for the evening, John and Lynne from the Isle of Mull club. Distance travelled 23 kilometres over six hours. 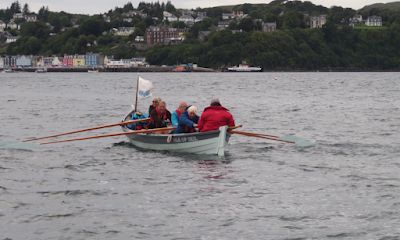 After we secured at the pontoons and rediscovered some ability to walk we were whisked off for hot showers and a great dinner and deoch at Dervaig. Off to bed at nine and missed the tennis!
Day Three was quiet once again. We left at nine, myself coxing again for the first half, accompanied by our hosts aboard their lovely Harrison Butler, surely one of the most practical ships ever designed. This final leg of about ten kilometres lasted just a couple of hours. 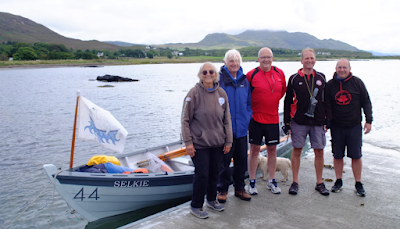 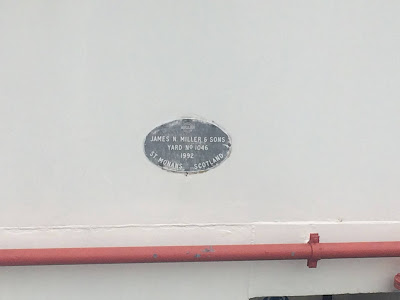 James then quickly rustled up some bacon rolls before driving me off to the ferry terminal. I was privately happy to travel back the long way (the van having only five seat belts). I had a chance to sample the delights of The Gallery, carrot and walnut cake and a good strong coffee, followed by Isle of Mull ice cream from the shop on the front, both signs of how Tobermory is increasingly attractive to visitors. The Mishnish still looks great, sadly the Macdonald Arms, once home to the legendary Bert Hall, not so good. 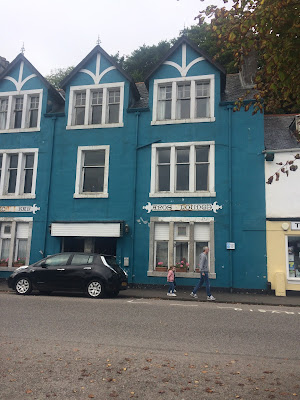 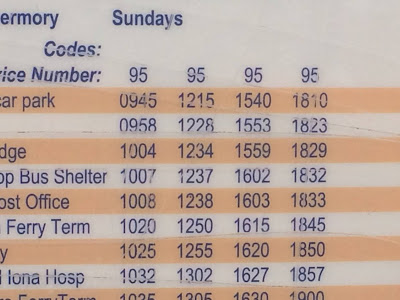 Then, with an hour or so to spare before the bus I found a nice American fellow over here with his father’s ashes, who seemed happy to listen to a few stories. The bus driver was a cheery man who started the chat by saying “I bring you up in the morning and take you back at night” and was a bit thrown when I told him I had arrived in a rowing boat. The bus was packed full, everyone masked up apart from a moustachioed BFB who spent a lot of the trip on his mobile. CallyMac made him mask up to get on the ferry, so he did actually have one. 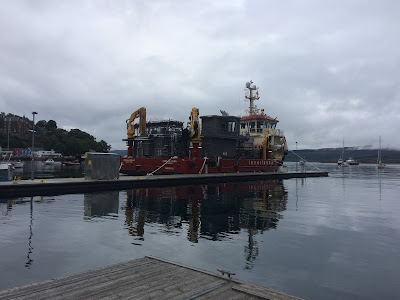 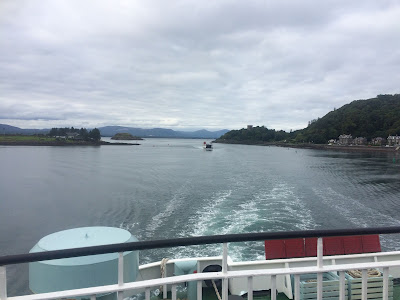 Post script: We've made it into the Oban Times, fame at last!